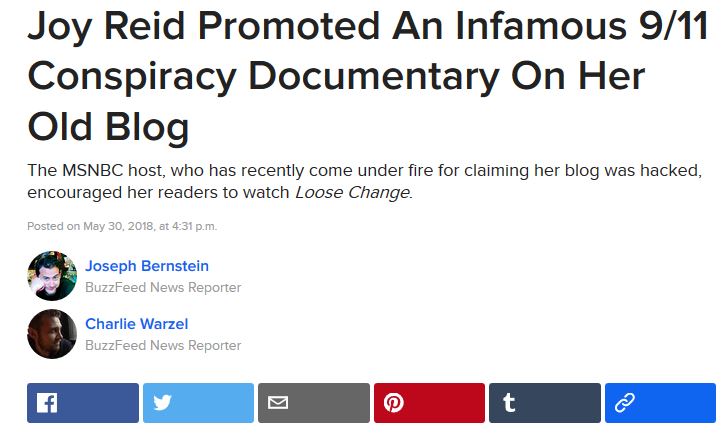 END_OF_DOCUMENT_TOKEN_TO_BE_REPLACED

The Daily Beast investigated the claims of Joy Reid’s ‘cyber expert’ and found that most could not be substantiated. I, myself, am less than enamored with Jonathan Nichol’s claims. For being an expert, he doesn’t seem to know very much.

And therein lies, I suspect, the seeds of this whole event: lots of writing over the years, memory, and bad tech advice.

At the end of the Daily Beast writeup, Kevin Poulson wrote:

If she wasn’t hacked, it doesn’t necessarily follow that Reid is lying. Her decision to hire a security consultant to investigate the posts, and a lawyer to demand the access logs for her blog account, suggests she genuinely believes at least some of the posts were planted. After 12 years and tens of thousands of written words, Reid simply may not remember.

It’s possible that in the end Reid will discover her adversary isn’t a determined hacker, but a far more dogged foe: The Joy-Ann Reid of years past, writing in a voice she can no longer recognize as her own.

I’ll have more to say in a later piece on what it means to be a writer putting yourself online, especially over the years. For now, I think that the Daily Beast has an accurate read on what’s happened.

I’ve had considerable pushback on Twitter related to my writing about Reid, the Wayback Machine, and authenticity. What I find ironic is that so many who condemn Reid the loudest post anonymously on Twitter. They want to hold Reid accountable for her past writing, while they, themselves, hide behind a bush.

In the meantime, Library of Congress has a backup of some (not all) of Reid’s past posts. BernieBros and the far right gleefully pick and choose snippets they can post in the most damning light, but if you want to know the Reid of long ago, you need to read all of her writing. Then maybe you’ll drop that stone you hold so easily in your hand.