Before the cold rolled in I took my belated trip to Elephant Rocks today. I was able to avoid the gauntlet of confederate flags along the way by looking at a map and discovering that the road I take to one of the parks I visit frequently is the same road that ultimately leads to Elephant Rocks, but coming from the opposite direction. So I came in the back door.

Near the town of De Soto, I noticed an older woman walking along the side of the road and I stopped to offer her a lift. She was heading home after visiting an herbal shop in town, and her arms were full of bags of herbs.

She was a fascinating woman, probably about 60 or so, currently on disability because of cancer of the breast and diabetes and various other ailments. Born and bred in Missouri and lived most of her life along that stretch of road so she was able to give me the feel of the place — not the statistics or the raw facts. The feel. What the principal did when the last tornado hit the school, or that the owner of the place we just went past was forced to clean up after the last storm but the damage wasn’t his fault, why did the government make him clean it up?

My passenger was religious, which didn’t surprise me. Religion is not an intellectual exercise in Missouri, it’s as much a part of the countryside as the rocks I was driving to see today. What did surprise me, though, was the deep acceptance and trust in God she felt. She had cancer, and from all indications, terminal cancer, but she was healthy and happy and upbeat, hitchhiking into town to get her herbs, taking her homeopathic remedies and trusting to God to do the rest. And if God decided to take her home, well, she’d be content with that too.

“Why worry”, she said. “Worry just makes you look old.” 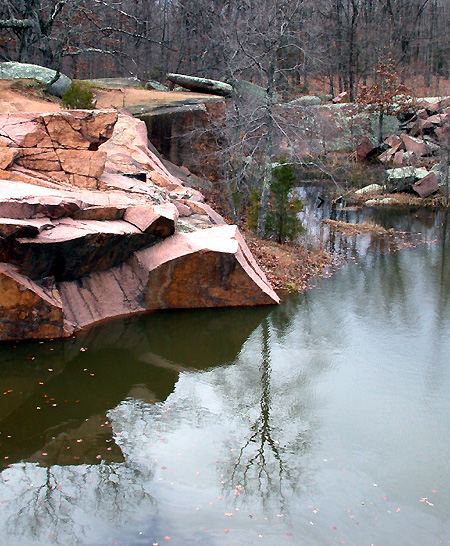 She pointed out the damage along the side of the road from a bad set of tornadoes that hit this spring. Stands of of trees were literally twisted off their roots, or picked up and tossed through the air like a twig. You could see the path of damage clearly as it followed along the highway, sometimes crossing it to hit the other side. I asked her if anyone she knew had been hurt and she said, no, God was protecting over them.

(When I got home, I looked the storm up and sure enough, the tornadoes killed people all around, but it left De Soto residents unharmed. An ambulance driver in the district remarked on this to reporters, saying, “It’s a miracle, isn’t it?”) 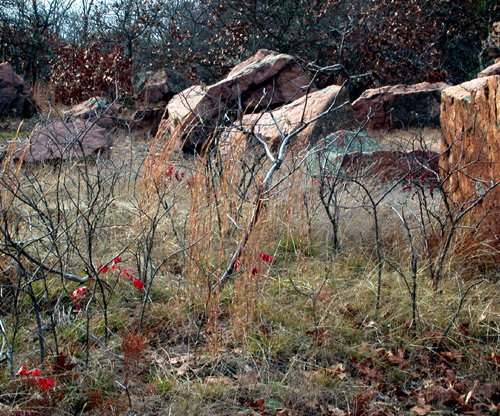 The rest of the drive after dropping my passenger off was beautiful, one of those almost perfect late fall days with sunlight breaking through dark clouds to frame this quaint old farm house, or that shaggy dirty white bull wading in a creek. I missed the stories though, the glimpse into the people I only know through my car window driving past.

There were quite a few tourists at Elephant Rock considering a storm was rolling in. However, the area is large enough that you can have space to yourself, so for the most part, I walked among the rocks alone, stopping at one point to eat my favorite cheddar and bread-n-butter pickle sandwich.

Elephant Rocks, the park, the experience, how to describe it. From the State Park description comes the following:

Visitors to Elephant Rocks State Park can easily view the granite boulders from the one-mile Braille Trail, designed to accommodate people with visual or physical disabilities. The trail passes by a quarry pond, which now supports a variety of animal life. A short spur off of the trail takes visitors to the top of the granite outcrop, where they can explore the maze of giant elephant rocks.

At first the boulders are small and manageable — they may weight several tons but they are shorter than you and you don’t feel the age as much. One of the rock formations that I called The Worm had two core sample drill holes made oh, a hundred and fifty years or so ago when they were testing to see the quality of the granite. 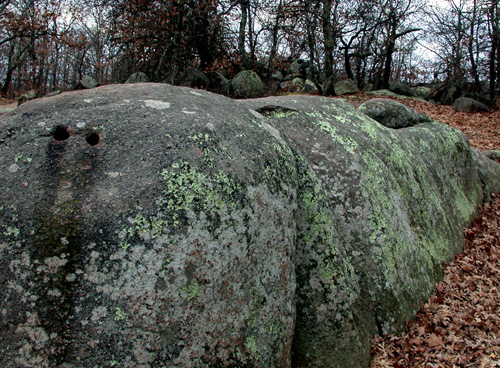 The rock pile, if this word could possibly provide you a feel for what its like, has little trails all over and people can climb the rocks, and do, especially the younger kids. Being a little older, and a little more cautious, not to mention weighed down with my usual photographic paraphernalia, I didn’t frisk about like a young mountain goat. But I did explore most of the paths, include the wonderfully named “Fat Man’s Squeeze”.

I can say now, unequivocally, that I do not have a fat man’s build. However, I did have to suck in my chest, as it were, one time to get through an opening. 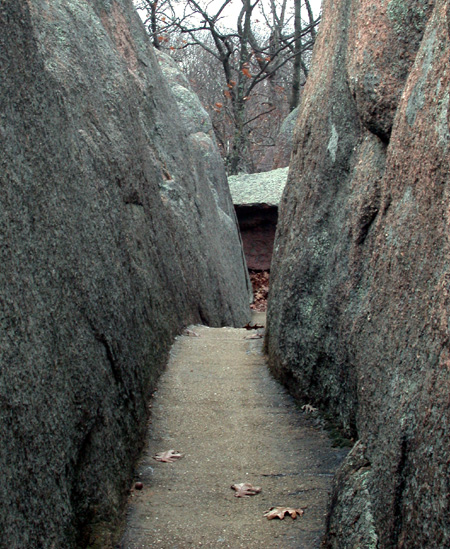 According to the guide:

Molten rock, called magma, accumulated deep below the earth’s surface. The magma slowly cooled, forming red granite rock. As the weight of the overlying rock was removed by erosion, horizontal and vertical cracks developed, fracturing the massive granite into huge, angular blocks. Water permeated down through the fractures, and groundwater rounded the edges and corners of the blocks while still underground, forming giant rounded masses. Erosion eventually removed the disintegrated material from along the fractures, and exposed these boulders at the earth’s surface.

It was when you round a corner and look up and see the big rocks, the rocks that led to the name of the park that you’re left breathless. The Elephant Rock, prosaically named “Dumbo” sits on top of a knoll isolated from the other rocks and framed by the valley and mountains beyond.

Inscribed into Dumbo’s surface are the names and dates from the quarry workers over the years, including one from a guy called Murray in 1885. Nothing more than faint irritations by insignificant beasts happening in a split second of time. 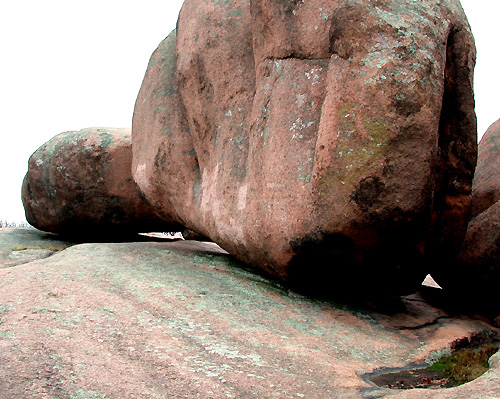 The rocks towered over me, with a size that photos can’t capture without sticking some passing kid next to it for comparison, and don’t think I wasn’t considering it. But it still wouldn’t have conveyed the feel of the big rock.

I may think I am tall, and that I am impressive standing there shoulders back and head high, silhouetted against the clouds; but the rock was 27 feet tall and 35 feet long, and as old as earth. I am just that half seen shadow that is past before it’s even begun. 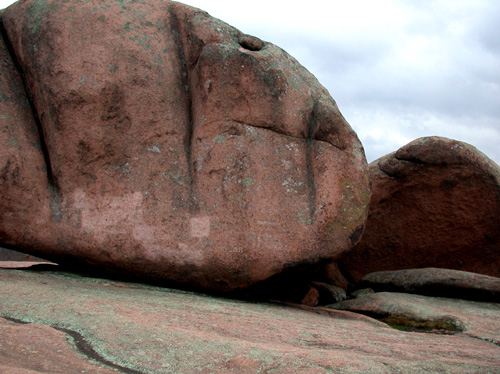 People were all about that rock. A tiny beagle walked by a boy with bright blue hair managed to get itself stuck in a crevice it was exploring. The boy finally managed to free it, calling it “dumb dog” all the time, but the puppy didn’t seem to mind if his wagging tail was any indication.

A woman about my age, maybe a little younger, accompanied by husband and daughter started a conversation with me, telling me about the rocks along the coast of Rhode Island where she was from and how much they reminded her of these big rocks. She asked if the formations were the result of the quarry operation and I said, no, that she was looking at a rock that was formed a billion years ago from the primal matter that makes up the Earth. She looked at me and then at the rock and then at me and said, “Really?”

She ran over to her husband and daughter and started telling them about what I said, but he just looked at her and asked if she wanted to go look at the quarry now, and her daughter walked away and she stopped talking and followed them, bright yellow sweater forming a vivid constrast to the pink of the granite. 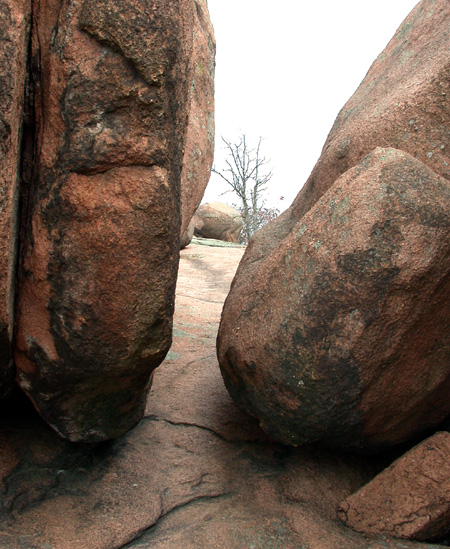 The weather got cold enough and the clouds stormy enough that most people were chased away and I was finally alone on that knoll high above the world. I placed my hand on Dumbo’s surprisingly warm surface and just stood there, for the longest time, thinking thoughts you’ll never read. Then I left.

On the way home I again passed the tornado path and it really was uncanny how many trees were down around homes, but not on the homes themselves. I kept looking for homes being repaired, fresh roof tiles and siding, new glass. But all I saw was old houses, rusty mobile homes and a whole lot of downed trees. Maybe my passenger was right and there was a God protecting them. She was serenely confident this was the answer; that God looked down and saw the people of De Soto and said, not today.

That must be what faith gives you — a feeling like you’re carrying a little bit of that rock with you, all the time. 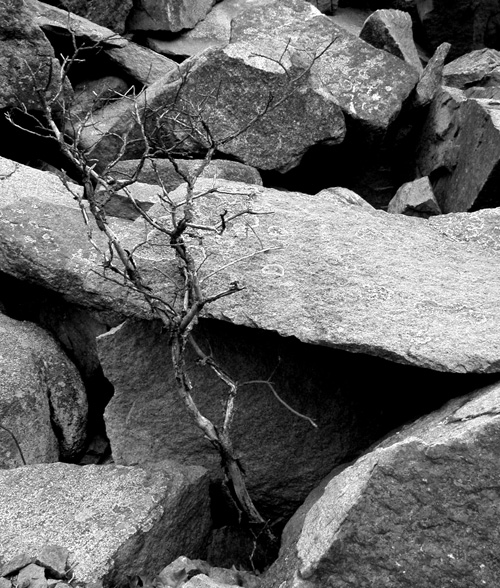