Vector Magic originated as a free online service hosted at Stanford University. You could upload a raster image, such as clip art or a photo, and use the service to generate a vector-based image. You could then export the image in a format such as SVG.

The service was simple to use and did an excellent job, especially if you’re not experienced with using tools like Adobe Illustrator or Inkscape’s Trace functionality.

The developers behind Vector Magic split their software off from Stanford, creating a company named Vector Magic and began to offer the web services for a price. Unfortunately, the price was high: to download a vectorized image would cost about $2.50 American, which ended up being too steep for most folks.

The company then came out with a monthly “all you can download” subscription service, costing $7.95 a month. That’s not a bad price for the service. However, the company also demands that you maintain a credit card on file, which is something I’ve never been comfortable with. Again, a case of good technology but not the best business practices.

I looked forward to the long awaited Desktop tool, where I could create as many vectorized images I wanted without having to pay $2.50 per vectorized download, or tie into a monthly subscription service that wants to keep my credit card on file.

Vector Magic just announced the release of their first desktop product, this one for the PC. The Mac version will following in a couple of months. This is a production release—if there was a beta release, it wasn’t public. I tried the application and it is very efficient, and does a terrific job at converting raster images into vectors. For one license you can also run the application on two machines, though you have to activate the license on each machine over the internet. If something happens to one machine, an email to the company should be enough to open the license for install on another machine. Should be enough, as there is no formal deactivation process, like you would have with Photoshop.

However, the cost of the application is $295.00. This is more money than I’m willing to pay for a tool just to make a vector conversion of an occasional raster image. I’m not one to begrudge people making money off their work and products, but I’ve been effectively priced out of Vector Magic’s market. It’s time for me to return to an open source tool like Inkscape and regretfully leave Vector Magic for those whose use of the product either justifies the cost, or who have deeper pockets than mine. 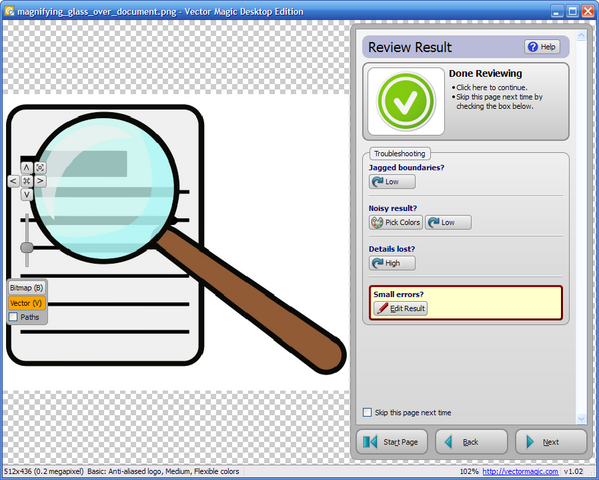