Best laid plans and all. Yesterday I was on my way to Kansas City for two nights, having cashed in the rest of my Hotwire dollars. On the way I was going to visit Burr Oak Conservation area, to see the brilliant fall foliage and the paths by the limestone cliffs.

The foliage was disappointing, the park rather dreary, the cliffs about 6 feet tall, and the people at the Nature Center weren’t particularly friendly, but at least the trails at Burr Oak Woods are very easy and pleasant walks: two are paved, and the other three are covered with wood chips. Wood chip trails are about as difficulty free as can be; a drunken sailor waltzing two barroom girls in high heels and fishnet stockings could walk a wood chip trail with nary a misstep. Next time that’s who I’ll take with me. 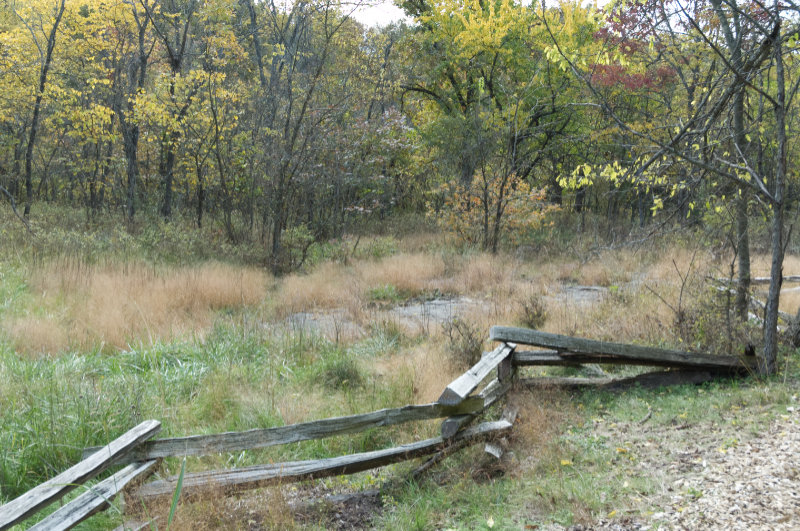 At one spot near a bench overlooking a watering hole, I stepped back to take a photo and tripped over the board used to surround the bench. Arms flailing, I swung hard around to grab a tree to keep from falling, severely pulling the piriformis muscle on my right side. I’ve done this once before and the results can limit mobility rather a lot. I would have been better off falling. If I’d fallen, I would have ended up on a wood chip path–just this side of falling into a lumpy bed. Instincts, though, kick in.

I remember my Karate teacher from years before talking about instincts. According to him, we thought we were taking karate to develop a better set of instincts–to be able to react swiftly and immediately to any situation. Instead, he would say, we were there to learn to overcome our instincts; to learn to let events happen.

For instance, during sparring, he said he could tell when we women hadn’t been hit hard in the face yet, as we would expose any number of vulnerable spots on the body to protect the face. Once we’re hit in the face, and have accepted the shock of such a hit and realized we’re neither dead nor disfigured, we can then turn off that instinct and become a better balanced fighter. Men are as protective of their groin as women are with their faces. However, there is reason for the instinct in this case: hitting a man in the groin can put even the biggest and strongest male on the floor. Which, if you consider all things being equal as regards training and compensating for physical size differences, women should always beat men in a fight.

I returned home yesterday, which is a good thing as I had a note from a client that the Newsgator API changes added some time on Monday broke the application I created for them. I’ve fixed the code; piriformis muscle will take a wee bit longer. Ah well, weather’s not great in Kansas City right now, anyway.