I thought my heart belonged to the Mississippi, but that was before I spent a day exploring the shores of the Missouri. What is the huge magnificance of the Muddy River when compared to the wild child that lured Lewis and Clark west and regularly defeats the Army Corp of Engineers? 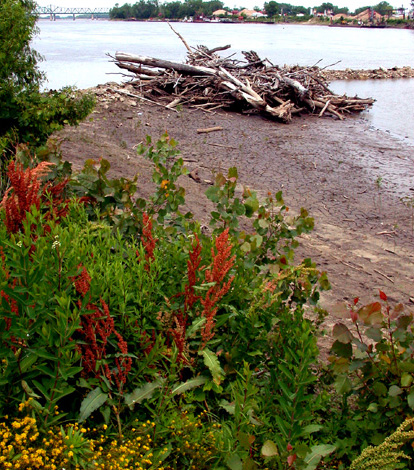 I followed the path by the water, exploring the banks and sand bars. At one point I came across tents along the water front, and men out fishing. I talked with one who told me about the fish caught this last week — fish 35, 40, 50 pounds or more and as tall as the fisherman. Or so he said. He said I needed to come down earlier in the day, and told me about the morning view, of whole flocks of geese swimming past, each with their babies. I reluctantly left the company of people who were as much river rat as I. 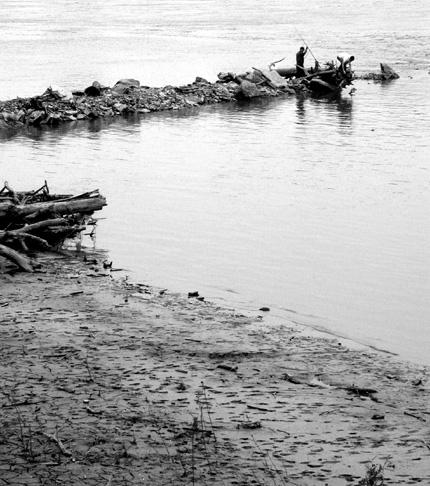 The pull of the river was enhanced by the charm of town along its banks, and I spent the afternoon wandering the St. Charles old Main street. One thing I have missed in St Louis is the concept of a promenade — a place of pretty buildings and shops where one can walk and look about, listening to street music, and eating ice cream cones.

Though filled with blocks of upscale eateries and ubiquitous ice cream parlors, there’s something of the old St. Charles still about the area, including a genuine old mill, and rough wood ancient Old Mill Bridge — still strong enough to hold up cars. 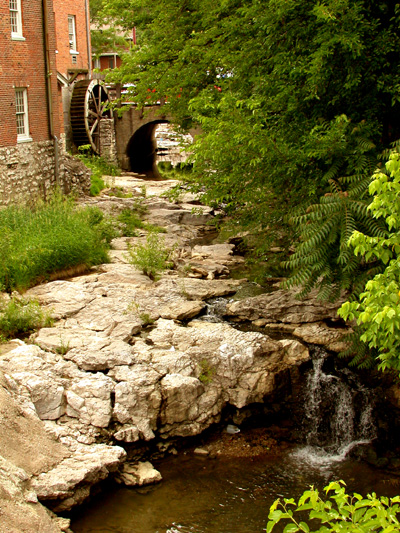 Of course, I would have to turn in my Good Photographer’s badge if I didn’t also get a photo of the old mill wheel. 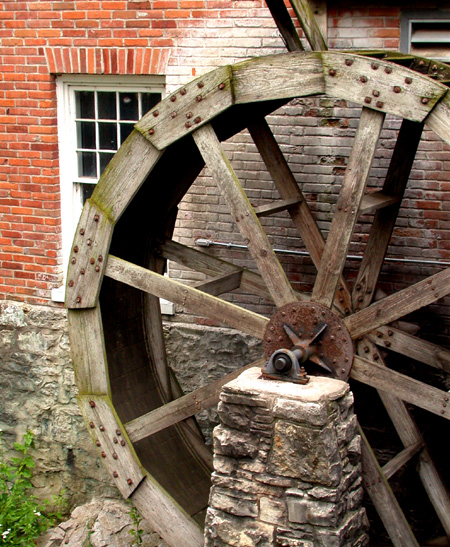 When Missouri was going for statehood, the question of its status as a slave state was raised, as it was raised with the other states making up the Louisiana purchase. When it applied for statehood, the predominately southern people of Missouri demanded to be allowed to keep their slaves, a move bitterly contested by the northern states.

At that time, Maine petitioned to be a state, and a compromise was worked out, called the Missouri Compromise that would allow Missouri to join as a slave state, Maine to join as a free state, and thus keep the balance between slave and free within congress. In addition, another provision was drawn up that above 36 degrees 30 minutes north in the Purchase territories would be free, below slave. Unless the slaves escaped to the north, in which case they were to be returned to their owners in the south.

One can look at the gardens behind many of the fine old brick buildings in St. Charles, filled with rare and wonderous antique roses and almost see the slaves serving tea to their masters. Hard not to see the hint of chain behind the lace in this town. 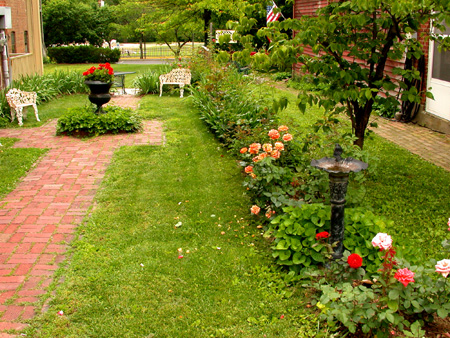 Missouri is a state of contradictions — it was a slave state, and populated by Southerners, and still has the feel of a southern state in many ways. But it was also a state made up of French fur trappers and northern explorers, many who fought for the Union army during the civil war. When I walk about in a town like St. Charles, I can’t decide if Missouri is the most northern state of the southern states, or the most southern state of the northern ones. I think it depends with whom I’m talking.

In front of the town square, a couple of townspeople were playing music, a combination of old folk and blues — wonderful to hear, and unique to this area. If you come to the St. Louis region for no other reason, you must come here for the music. 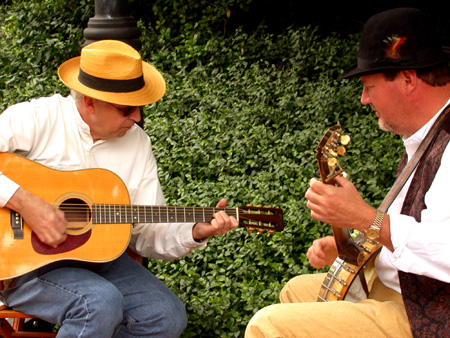 St. Charles is also the trailhead for the Katy Trail — a 225 mile trail formed of crushed, packed limestone on what used to be an old railroad. It follows the Missouri river for the most part, across plains and at the base of towering cliffs as well as cutting through towns. It cuts straight across Missouri, almost reaching Kansas City.

I decided my walking goal for this summer is to walk the entire Katy Trail, a few miles at a time each weekend. I figure it will take me 5-6 months, give or take. Of course, if I had a bicycle, it would be much faster. 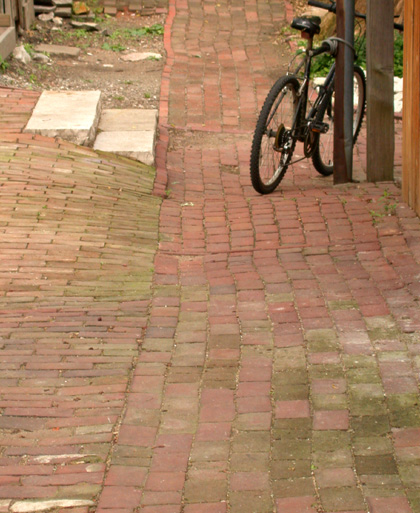 Mr. Golby took time out from his *site redesign to stop by and leave a comment, but the comment window caused his browser to freeze.

Have others of you experienced this problem? Opening the comment window causing your browser to freeze or crash, or the page not opening?

*(I can see! I can read! … Is that what he’s been writing all along? I though he was selling Buster Browns…and some kind of cereal…)

Euan Semple was recently on holiday in Wales, posting a single photo on his return. I asked for more photos since my maternal grandfather is Welsh, and Euan came through with some wonderful photos. Thank you Euan.