Today I was on top of the world..well, at least the top of the world here in Missouri. I finally visited Taum Sauk, the tallest point in this state. I also decided to walk the three mile Mina Sauk trail and see the Falls at the end point — the longest falls in Missouri, at over 100 feet. I had read that the trail was rugged, but thought I could manage it.

This was the toughest trail I’ve climbed in Missouri, and probably about the toughest I would climb, anywhere. The only saving factors were that it was a relatively short trail — three miles– and the weather was very, very good for hiking. But it was hard walking, too hard for me. Add to the difficulty of the trail was the fact that much of it had water over it, making footing precarious at best. I am bruised head to toe. 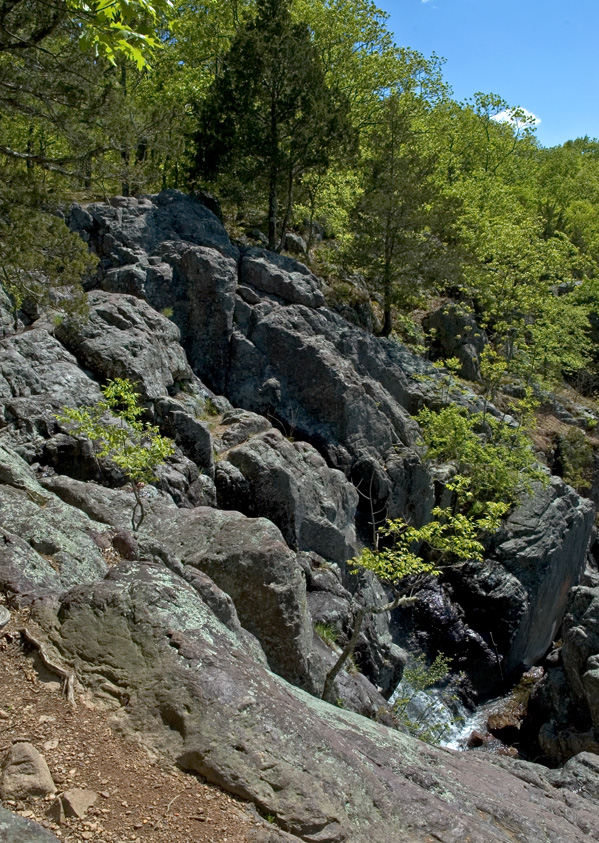 To add to the challenge I took my backpack filled with camera gear. The irony is that by the time I got to the Falls, all I wanted to do was go home so I took a few shots at the top and didn’t even try to make it to the bottom. Not hiking by myself, and not hiking when I’m already tired.

I did make some friends on the way — and it was a lovely day, with a lovely view. More photos out at my Flickr account, and more writing tomorrow when I stop feeling like I’m going to get sick.

I also managed to make it to the ‘high spot’, to look out over rolling hills of green and to make a shout of triumph: 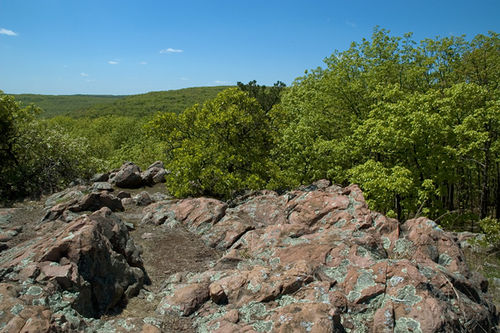 The conditions look very good for Hurricane Katrina to be a very nasty affair when it hits land. There’s little or no shear to tear it apart, and the water in the Gulf is bathtub hot. If it hits on or near New Orleans, well, this is about the most Not Good of the Not Good scenarios.

I’d hate to be an Emergency Management official in New Orleans right now. Katrina is pretty much following the NHC forecast, and appears likely to pass VERY close to New Orleans. I’m surprised they haven’t ordered an evacuation of the city yet. While the odds of a catastropic hit that would completely flood the city of New Orleans are probably 10%, that is way too high in my opinion to justify leaving the people in the city. If I lived in the city, I would evactuate NOW! There is a very good reason that the Coroner’s office in New Orleans keeps 10,000 body bags on hand. The risks are too great from this storm, and a weekend away from the city would be nice anyway, right? GO! New Orleans needs a full 72 hours to evacuate, and landfall is already less than 72 hours away. Get out now and beat the rush. You’re not going to have to go to work or school on Monday anyway. If an evacuation is ordered, not everyone who wants to get out may be able to do so–particularly the 60,000 poor people with no cars.

I used to have a server and hosted several friends, each of whom contributed to the upkeep. It was fun having the server, but a lot of work, too, so eventually I moved back to my current host, Hosting Matters.

I still hosted most of the folk through a re-seller account, but my finances can be iffy at times, and didn’t want people dependent on me when I may not be that accessible. So I helped the folks move — either to other resellers at Hosting Matters, or accounts elsewhere. One person was going to move to a Blogspot position, but she never did return–she was getting tired of the weblogging scene towards the end. I miss her.

I still have one person hosted at burningbird.net; normally a quiet person who didn’t take up too many resources. He’s had situations at home that have required all of his attention so his posting has been infrequent, but that’s okay. After all, we don’t need to monitor a dormant site.

Well, we never used to have to monitor a dormant site.

During my recent cleanup, I checked my bandwidth use and was astonished to see how much bandwidth had been used this month. Further checking showed that my friend’s site was hammered, badly, about a week ago and the high bandwidth use was still ongoing.

Well, after considerable research I think I found the reasons: hotlinking and a malicious attack. At least I have to assume it’s a malicious attack, associated with, but may not be arising from, forums at maxboxing.com. I say may not be arising from, because anyone can fake a referer from any location. And I say malicious, because I’ve never seen a referer spammer that obsessive with one site, to hit continuously.

I’ve since put a ban on anything from the one site, as well as a ban on hotlinking. I’m now running an active monitor on the logfiles for the site to see if the problem re-occurs.

It used to be when we’d take a break from our spaces that, as long as comments were turned off there wouldn’t be much of a concern about the site just sitting. Unfortunately, those days are over. Hotlinking is becoming more and more of an issue, as more and more people join forums, each wanting their own cute icon and, thanks to search engines, finding and picking images from your site. Then there are those from fark.com, who hotlink with the best of them, as Scott from Random Choas recently discovered.

More than hotlinking, though, referer spam is really becoming an issue. It wouldn’t seem like anything other than a nuisance, but as the experience with my friend’s site demonstrates, out of control spam applications or malicous behavior can quickly push a site’s bandwidth use above even that generated by a direct Slashdot link.

So what’s a person to do if they host their own pages but want to, or have to, take a break? How do you counter increasing abuse of our systems by outsiders who are ignorant, rude, greedy, or outright malicious, yet still keep the pages open for those who actually want to access our pages to read them?

I don’t know, but I imagine I’ll learn more about the problem as I continue to monitor log files.

(PS: if you haven’t looked at your bandwidth use recently, I suggest doing so on a daily basis now.)