The joy of being known for one’s interest in cephlapods is that one gets links to all sorts of interesting stories.

A friend who walks among us, cloaked as King Henry did among his men before battle, sent me a link to a weblog post with a link to a story about a giant octopus attacking a mini-submarine. This joins with other recent video showing us much of what was previously unseen in the depths of the ocean waters, such as the recent first recording of a live, giant squid. According to one marine biologist, the reason the octopus may have approached the mini-sub is that it was old and senile, and either thought the vehicle was food or a mate.

And you all thought we had little in common with the octopus.

The original story didn’t have video, and when I searched for it, I found a Slashdot thread on the story.

For all the 2.0ness of Digg, it will never match Slashdot when the Slashdotters are in their stride, and this thread demonstrates this. Almost immediately, one commenter provided links to the video. Others than built on the story, most humorously. My favorite is the following:

Do you know how fucking big a sperm whale is? It’s huge. HUGE. And giant squid eat them. Listen to your heart – no matter what the scientists tell you, 4th grade ecology has convinced us all that whales are intelligent loving animals. Did you see Star Trek 4 [imdb.com]. They’re the freakin’ saviours of humanity man.

And giant squid eat them

Not beacause it’s easy. Oh no, not because a sperm whale is an easy catch. Big, remember? No. It’s because squid are evil incarnate

Do you know how long they’ve been down there? No one does. But my guess is the squid and it’s precurser have been down there in the depths for a lot longer than man has been knucklewalking. That’s old. And you know they think down there. Brood down there. Their tentacles floating like the limbs of children relaxing in the water, they brood and wonder how to conquer us from below.

Things that think and brood also dream. And things that dream begin to worship the stuff of dreams. Out of man’s insecurity we have sublimated a great father figure into the sky, according to Freud. What about the tentacled things in the watery darkness, whose females are larger than their males?

I’ll tell you what they worship

A great multilimbed mother of the dark watery brood. Deep down in the very molten cracks of the earth filling the sea with inky blackness. THAT’s what they worship. We killed men in the crusades. Men who looked the same as other men. What will the dark octupi and squid do to US who are mere flabby bloodsacks to rip apart and drink out fluids with their beaky maws? What in the name of their Dark Mother goddess will they do to us when they rise into our airy realm?

Think about it dudes

Us computer geeks are basically fucked.

Weblogging is not ‘tech’.

Weblogging uses technology, but is not, in and of itself, ‘technology’. Weblogging conferences are not technology conferences — not unless the focus of the conference is building software, not using it.

If you’re anything when you’re a weblogger, you’re a writer. Or a photographer. Or perhaps even a pain in the butt (several hands raise). But you’re not a tech, not unless you do more with technology than use a weblogging tool.

Just getting this off my chest. Weblogging is not tech.

Yesterday I kicked off my 2006 season of orchid photography, but I don’t have any orchid photos to show you. I’m holding all the orchid photos until the end of the shooting season, when I’ll make the best into a show hosted on my new development server using my new photo software.

As has been happening all winter, we had another mild day yesterday, so I do have some photos of a walk about the Botanical Gardens, including the usual ducks and geese mixing with the koi being fed at one of the bridges. 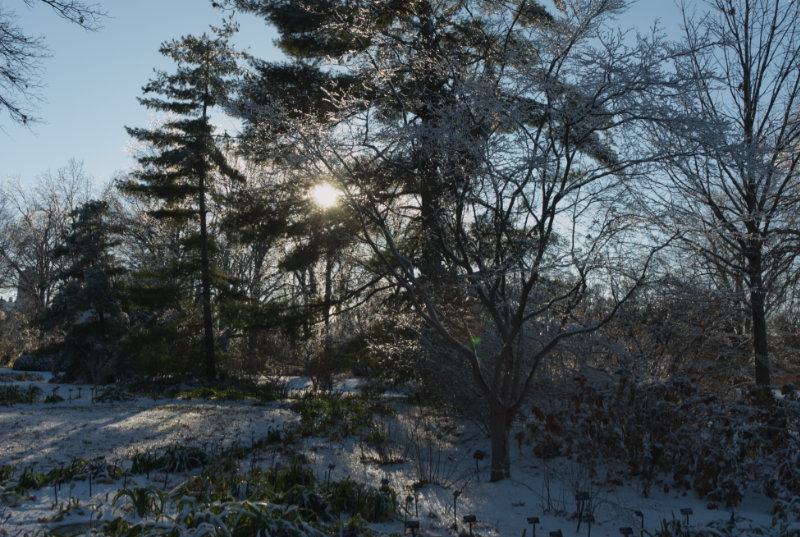 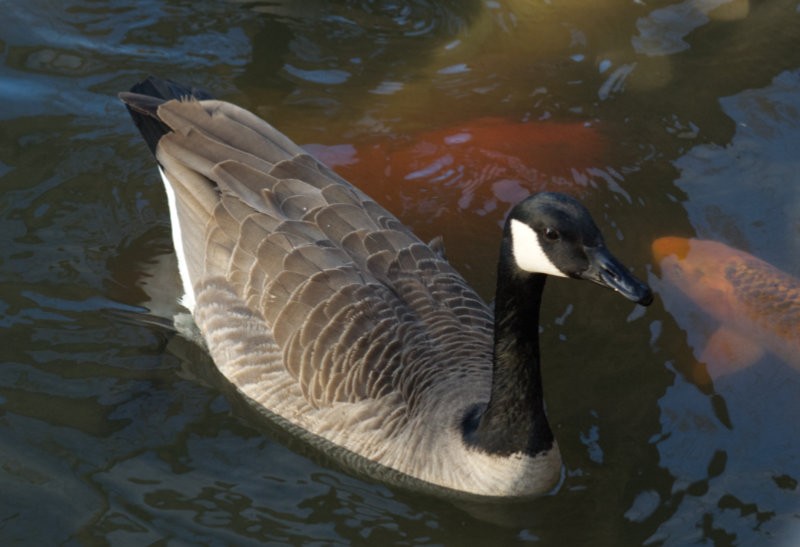 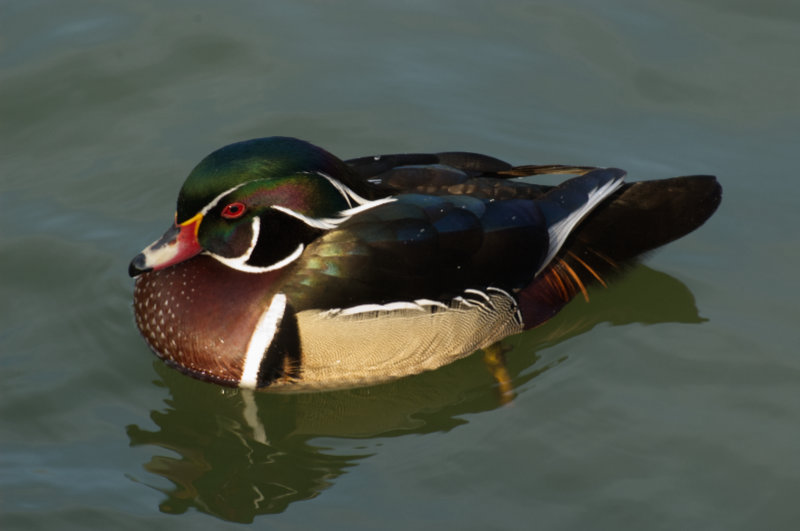 I was rather surprised to see how many trees were in bud, and it isn’t even the beginning of February yet. Early spring this year–I wonder if this means we’re in for a long summer? Oh lordy, after last summer, I don’t know if any of us are looking forward to that. I’ll have to plan on visiting lots of folks in the north this summer.

The Witch Hazel was in bloom, but that’s normal for this time of the year.

Just before closing, I was going by a group of trees near the exit when I saw a mockingbird. I’ve been wanting a good shot of one of these, but it was dark so I had to use my flash. I thought using a flash would chase the little bird away. Not only did it not chase the mockingbird away, the flash attracted it closer. The more I would take its picture, the closer the mockingbird got until it was almost out of my focal range.

The light also attracted a couple of robins and a male and female cardinal. The female cardinal was shy and peered out at me from behind the branches, but the male was willing to strut his stuff. 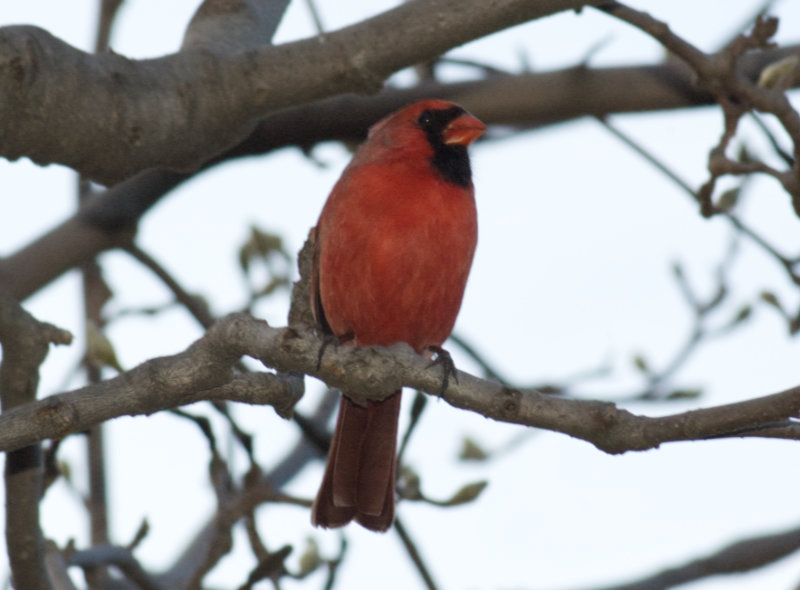 I guess getting photos of both a mockingbird and a cardinal calls for a link to my Mockingbird’s Wish story. For those who weren’t reading this weblog back in 2003, this is one my most favorite writings and was inspired, unbelievably, by a Creative Commons debate.

In the reception center, the first of the Dale Chihuly glass sculptures is hanging from the ceiling. The piece is huge — probably 20 feet long. Several pieces will be displayed with orchids and various other plants in the Climatron starting in April. The Climatron is already a mystical place to spend time–I can’t imagine what it will be like when this show is on. Especially the evening showings when the glass and flowers are lit up, and small birds are flying about through the huge trees that have grown up in the misty heat. If you’re going to visit me this year, make sure to come between April and October to see this show. 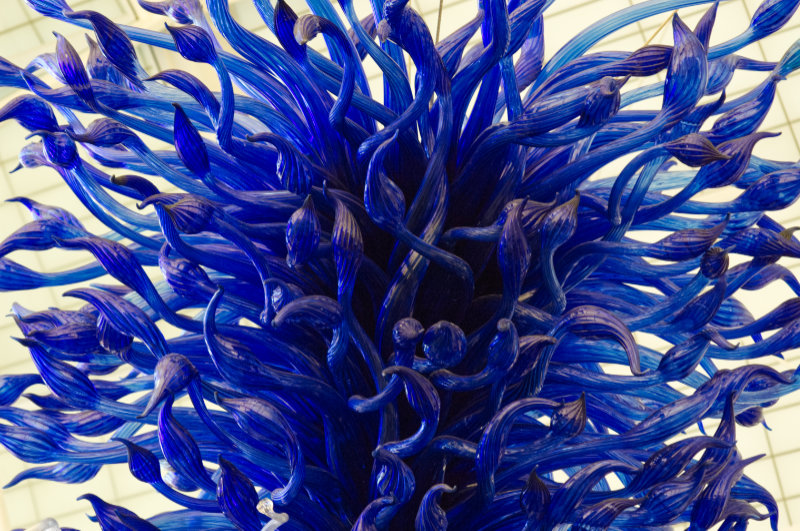 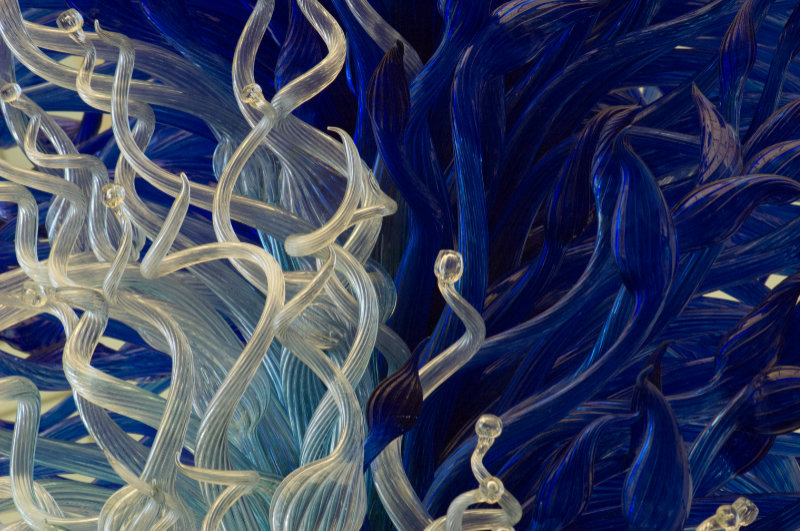 On second thought, I’m planning on taking my driving tour about the country in September/October, so come before then.

Rob asked me for my most dangerous idea, and both Karl and pb have tapped me for the Four Item meme and I want to respond to all three; I’m folding the responses into a bigger piece I hope to finish later this week. The writing won’t be as curlicue, fragile, or as beautiful in the light as the Chihuly piece, but it will probably be about as long and pointy.