According to Techcrunch, the winning team of hackers at Yahoo’s HackDay was an all woman team. The project was a mobile computing device that one carries in one’s handbag or pack, which is a camera integrated with a pedometer that takes pictures every few steps, which it then posts it to Flickr using the Flickr API (a Yahoo! API).

The winning team consisted of Diana Eng, Audrey Roy, and Emily Albinksi. From lookups on their names, Diana and Emily have appeared in Make magazine for their techno-clothing (and Diana for her work with the popular TV show, “Project Runway”), and Aubrey looks to be an MIT engineer who has done some very interesting stuff with architecture, and who works with Sharpcast.

Some of the responses have been congratulatory, but I’ve seen a lot of “beaten out by a girl” crap, and it’s too bad that when women do participate, and participate very well, their effort is dismissed primarily because they are women. As such, I hate to join these others in making a point the winning team’s sex, because I imagine the three would like to think of themselves as complete hackers first, who happen to be women.

But I’m so damn proud!

Beyond Caffeine wishes the project had been something non-gender related. True, the device was installed into a purse, but could be connected with a GPS device instead of a pedometer and installed into a backpack and allow people to follow along on a hike through the Alaskan outback, as much as a jaunt through the hills of San Francisco. Travel magazines would be of interest, and organizations such as the US Geological Service. Think of it: hands free static imaging, immediately posted to a group of interested folk.

If we keep putting caveats on how women must act and what we must do in order to establish our ‘cred’ with the tech community, we’ll never achieve any level of success because the bar continues to be moved. We seek to join the profession, but when we do we’re told we must be more visible; when we are, we’re told we must only do that work that satisfies a predominately male view of what’s “useful” and what’s not.

This is women being hackers, good hackers–plain and simple.

My roommate wanted to see Johnson before it closed so I took him on Saturday, stopping by Elephant Rocks on the way home.

The Ameren proposal for restoring the park has been posted and accepted, and work starts on Monday. The people that visited the park one last time on Saturday were in a chatty mood, and included one of the engineering contractors who had been at the dam site just after it broke, and another older gentlemen who had some wonderful stories of the area.

He told me about visiting his uncle who had a farm not far from the shut-ins. At night they’d climb down the hill and would fish the river by lantern light, because, (his uncle told him), fish caught by lantern were better tasting.

Each time he finished a story he would look down at the shut-ins and the river and would point out the boulders and rocks that didn’t fit. It’s odd, but I had noticed that the shut-ins weren’t ‘right’ since the flooding, but it took his eye for me to see all pieces that didn’t belong.

He was friends with the man that owned the white house right across the road from the park, built just high enough on the hill that the waters flowed around but not through. Said that it took out the barn, though, but at that they felt lucky.

He mentioned about Ameren also running a nuclear power plant, a comment taken up by the engineer: doesn’t give you a lot of confidence that a company that would let a dam break also was in control of a nuclear power plant. The young man from the forest service there to answer questions kept silent, but would, from time to time, nod his head.

All of us agreed that moving the campground upriver and far away from the dam that’s going to be re-built is a good idea.

As to the gentleman who fished by lantern light when he was a kid, I guessed he was probably in his 70s or maybe 80s. As he shared his memories, he would look out over the Shut-Ins and his eyes would begin to mist over. He’d abruptly stop talking and look away for a few moments until composed.

One of the other folks mentioned that the forest service person had told them the park could be closed up to two years, so this really will be my last story on the Shut-Ins for a long time to come. I was surprised at how little all of this was in the newspaper–not even a hint about the restoration plan or the closure. I guess it’s just a story from Missouri and no one died.

Anyway, photo show from the day.

Almost all of the peach, pink, and rust rocks and boulders in this picture was dumped by the flood–over 6 feet in places. The plan calls for all of this to be removed, but they can’t bring in equipment and a helicopter can’t handle the air current in the area. Should be an interesting challenge. 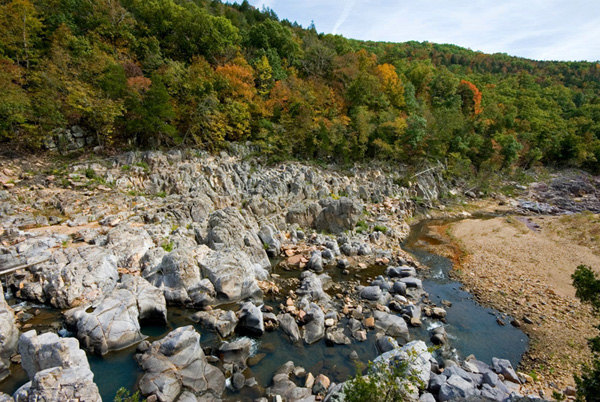 The force of the flood pushed hundreds of trees over that amazingly enough, still continued to thrive. 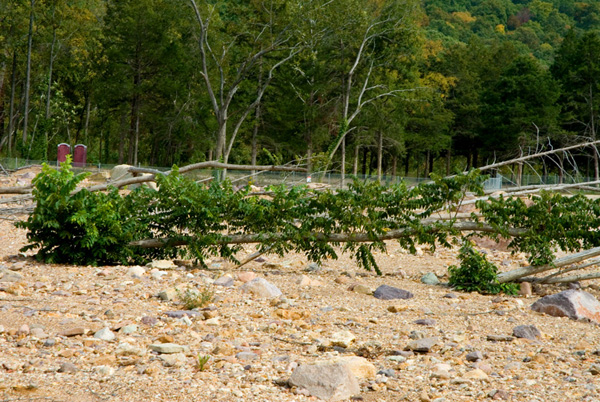 There are other Johnson Shut-Ins photos in the slide show, but the rest of these pictures were at the Elephant Rocks state park. 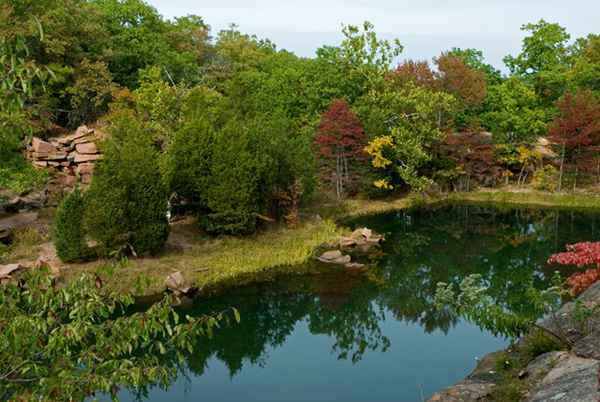 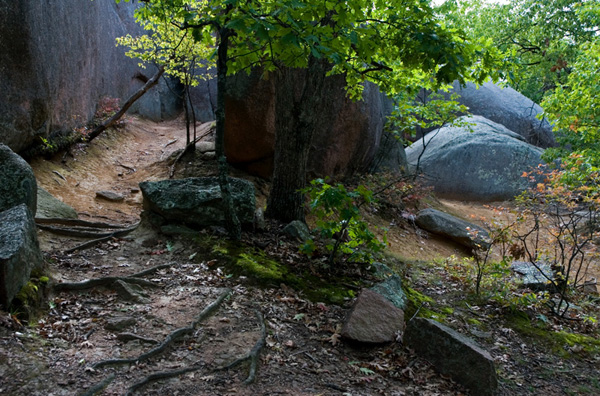 I didn’t have the heart to tell these young women that there was a really easy way to get to the top. 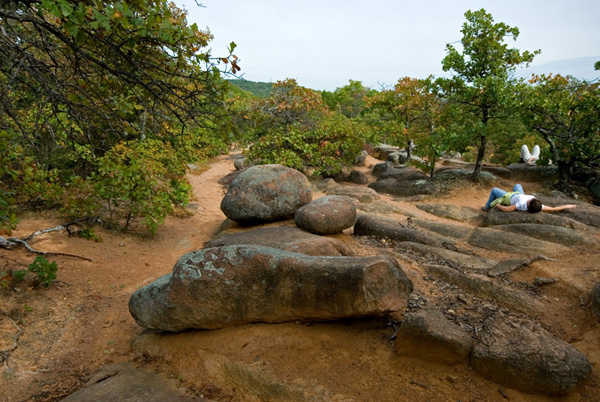 The park had just broken a new trail to the old quarry building. Look at the exquisite rock work that went into the walls. 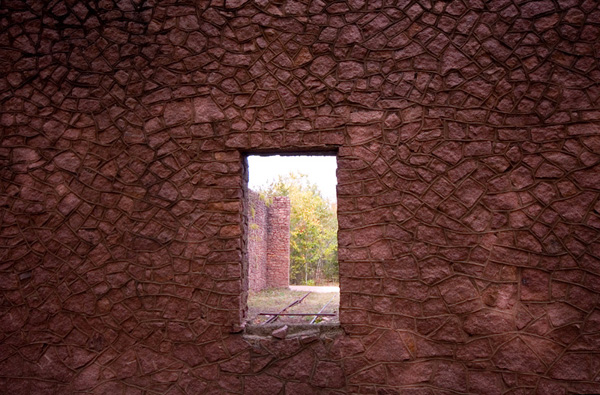 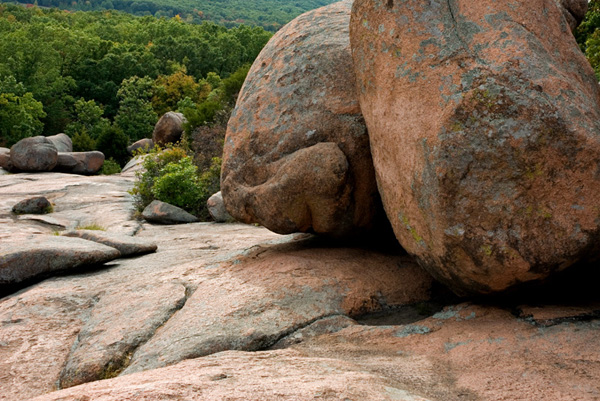 There has been some news on the closure, such as this story, which also details a political tug-o-war in this state surrounding Jay Nixon, Democratic challenger to current governor Blunt. Nixon has been cleared by an ethics committee. The state is also seeking Church Mountain by way of compensation from Ameren.

Despite temperatures this coming week into the 90’s and potentially breaking all records, we are into fall and our best color should be coming out in the next two or three weeks. Now is when I need to get into my car and get the fall color photos I’ve been wanting, and to visit all the mills I’ve not been able to reach easily from St. Louis.

The traveling will also take me to Columbus to the state historical society to view some microfiche, and perhaps some other odds and ends places. I also have the book deadline for the middle of November, not to mention the work ongoing at my sites.

Today I made a static copy of the old Burningbird, using the Unix utility wget to create a mirror image; including getting copies of all photos and stylesheets and such. With this copy I can eliminate the WP installation and database. I can also make permanent redirects from various pages to the new sites when they’re up. (The way WordPress modifies .htaccess made this difficult at times.)

Both the main page and the feed are now redirected here, and we’ll see how this shows up in aggregators. Bloglines shows the new site, but still lists it as the old feed URI. Since this is a permanent redirect it should change the adress, as well as redirect the content.

As for using relative addressing for stylesheets and such, most of us use dynamic functionality to generate pages, and again, this doesn’t seem to be the issue it once was. It also doesn’t impact on search engine optimization–the bots are smart enough to know when a group of sites all belong to the same place.

I’m also never going to use date in my URLs again–why ever did we decide this was the way to do things? The date just makes the URL messier, and it’s a bitch to deal with backups. You have to watch us techs: we’re like your kids in that we say the darndest things at times. Use dates in your URL; don’t use dates in your URL.

If you comment and it goes into moderation or you email and I don’t respond right away, think of me at a mill surrounded by fall foliage, taking photos and enjoying the cool, crisp autumn weather. Or think of me in front of my computer intently working away–cat on my lap, head turned up to me going, “my turn, my turn”. Whichever scenario turns you on.