Hurricane Dennis turned to Tropical Storm Dennis and finally to Tropical Depression Dennis where it made its way, directly, to some of the most drought plagued areas in the country. The Missouri bootheel has received about 4 inches of rain, and we in St. Louis have received close to 2 inches. Not a heavy rain, either. A gentle misting rain–warm, but not too warm, and with just a gentle breeze. It was and still is, a thing of exquisite beauty. 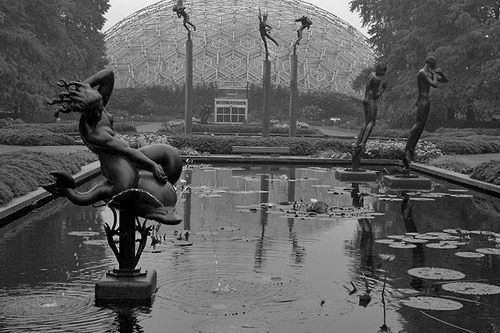 And now you know my deepest, darkest, secret: I love the mist. I love fog, and misty rain, and dew-kissed mornings. Oh, I can appreciate the sunshine, and thrill to a storm. But I love the mist.

I pulled jeans over my poor bug bitten legs and set off for the Botanical Gardens, taking along my camera in hopes the rain would remain light. When I arrived at the park, there were a few other souls walking about. They carried umbrellas, but I just had on my soft, gray t-shirt–a soft, bittersweet gray, like the day–and black jeans, camera in its waterproof carrying case. 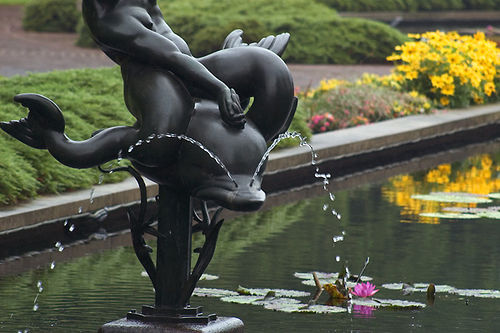 The water lilies are back. Gray mist and water lilies: can it get any better? Today was a day meant for poetry, and I found a lovely one titled The Water Nymph, by a man named Jerry Sarvas, who says of himself:

Jerry Sarvas, 49 lives on the fringe of society. A conscientious objector drafted during the Vietnam War, he enjoys being anonymous as much as possible and isn’t interested in being a part of any more armies …. be they military or spiritual.

I hesitated about repeating Sarvas’ poetry, because by doing so, I betray his desire for anonymity. But I know of no poet who doesn’t appreciate that another likes their work. Even Emily Dickinson–quiet, shy, and betrayed Emily Dickinson, sewed her poems into books rather than hold each over a flame once written.

Silhouette of pagan beauty
Drenched in moonlight’s soothing rays
Reflects upon the peaceful water
While pungent clouds of Shivranjani
Drift seductively around the pool.
Scented gardenias float on the surface
Captured in her dancing hair.
Moon rays shower her with beauty
Darkness drapes her through the night
Gentle splishing playful splashing
Starlight glistens from her body
Illuminating moon soaked breasts
Drenched in music, bathed in rapture
Blissfully floating undisturbed
A vision of contentment
Her gentle sway – her divine play.

Another poem that comes to mind is Sabrina Fair by Milton, but one poem is enough for today. Still, Sabrina Fair is a lovely poem. Print it out, and hold it for your own misty day. 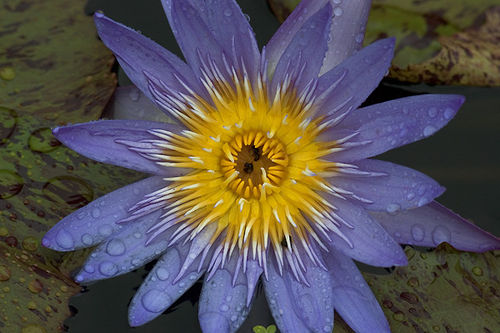 The weather and the joys of the garden were a wonderful distraction from the blisters on my legs, though now that I’m in a chair, they are making themselves known. Each bite goes through the same cycle: pencil eraser sized dark red spot, blister, and then an ugly red spreading out. With one, the redness has spread half across my shin. It doesn’t help to know that these will heal, all on their own. I do know that this is the last time into the Missouri woods this summer, even woods as domesticated as those of the Shaw Nature center. Either I’ll walk groomed gardens, or I’ll walk on rocky paths — no trees, no bushes. There is obviously something inimical to me in the Missouri Green. 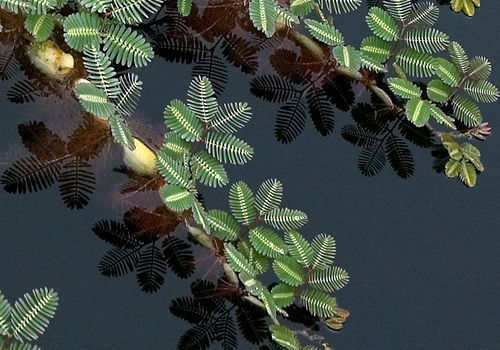 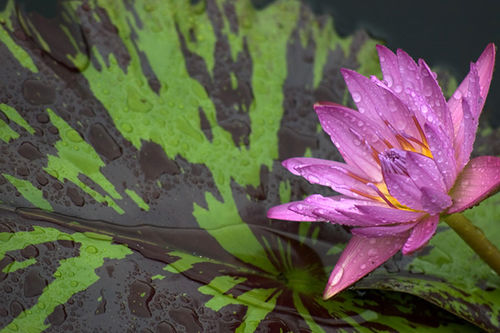 I had an amazing dream last night. The coloring was golden throughout–lighter than sepia, warmer than grays. All in gold, except for splashes of purple; bright splashes of purple here and there: glowing from a street light or reflected from a shiny lawn ornament.

In the dream, Michael Jackson was taking care of my Dad. Yes, that Michael Jackson: terror of tiny tots the world over. We’re in my Dad’s apartment, and Dad is sitting in a chair, with a white sheet wrapped around him like a toga. As I came in, he looked up and smiled at me, but didn’t say anything–just smiled. Michael enters the room, hair in his eyes and his movements are nervous. His hands are in his pockets, and he’s wearing a white dinner jacket and dark pants. He says something about my Dad, but I’m not happy with him, because my Dad does not look that well cared for. So here I am in the dream, lecturing the writer of Thriller on how to care for my father, all the while he’s responding in that soft, whiny voice of his.

But then the dream shifted, and I’m riding along on a motorcycle, through an odd, surreal town made of cement blocks, on a barren plain with thick stormy clouds overhead. The only color, other than the gold that persisted throughout the dream, was that bright, vivid purple, flashing from the stoplights. 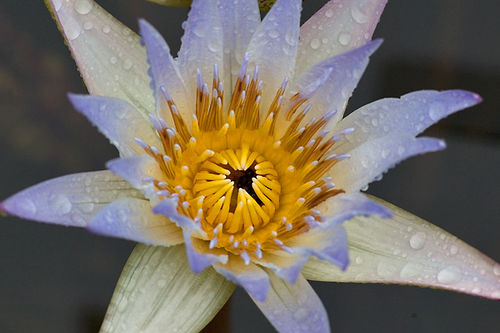 Someone was riding with me, but I don’t know who. The same person was with me all throughout the dream…but I don’t know who it was. They were nothing more than a pants clad leg with boot out of the corner of my eye, arms wrapped around my waist as we rode, hand on my shoulder as we looked at my father.

We ride through a city of faceless people who are wandering about the neon lit streets, bamboo forming a ceiling over the road. We drove straight until we come to a large structure — a parking garage, with walls open to the air. We entered the building and traveled around and up, and through the open walls we could see out over the plains as the storm worsened. I received an impression that the person with me wanted to turn back, but I wanted to continue.

Suddenly, with a flash of purple lightning, a tornado began to form in front of us. It was glorious, and I stopped the motorcycle and we–the leg and I–looked up into the dark column, at the movement of the air as it tore across the plains and toward the cement city we were in.

But then I woke up. 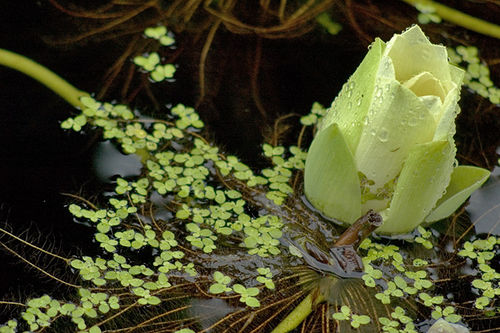 I laid there on the bed trying to relive the dream in my mind to preserve it as it passed from my fanciful self, my artistic self who has no speech into this, the aware and verbal me. But as happens, there are no anchors in a verbal world for such flights, and it began to fade and all I can remember is what I’ve told you.

What I want to know is: why purple? 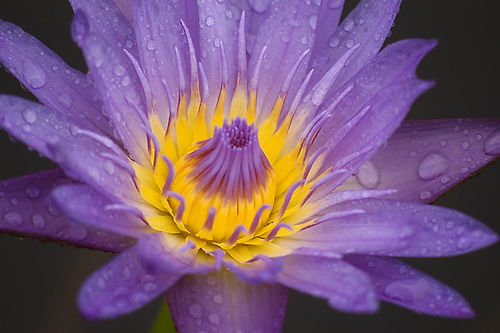