I am in the midst of travels, just completed one trip, about to head out on another. I hadn’t planned on writing to the weblog during these trips except that I heard from a friend who asked if I was on Blogger Strike. Since that was one of my more asinine ideas, I didn’t want to leave the impression that I was sulking at home, on strike, waiting for someone to notice that I wasn’t talking; there are enough voices raised in mockingbird song or magpie chatter to cover the silences that issue from all of us at one time or another. That’s just the way weblogging is.

If nature abhors a vacuum, nature also abhors silence and when silence happens from one direction, noise, living noise rushes in from other directions and fills the void. That’s just the way life is.

My trip last week was related to family, and ended up being a difficult time, circumstances of which I have no interest in relating, and you have none in hearing. Combined with other things, I have been in a melancholy mood (yes anther melancholy mood, and if I continue, I am destined to be a poet and live a short, angst-filled life), and another reason for not necessarily wanting to write. On the road, I was listening to one ‘life done me wrong’ song after another, drooping further and further down into the seat of the car until all of me still visible to other drivers was two hands on a steering wheel; the ghostly hands that terrify drivers the world over, and normally the hands of that small, old person too shrunken by the weight of time to see over the steering wheel. You know the type.

The weather on the road was not good and I kept getting buffeted about by the wind, sliding a bit on the slick roads. The interstate was filled with semis and I’m used to being the small bird among the elephants except that one was acting mighty peculiar. It was a dark blue older semi, hauling what looked like farm equipment on an open bed, speeding like mad to stay behind me in the fast lane. He kept turning on his brights and turning them off, honking his horn, until a break in the music let me hear him and I came of my funk long enough to see his brights in my rear view mirror.

When I pulled over into the right lane and slowed down, he pulled up beside me, frantically pointing down at my wheel. I hit my emergency light indicator and started to gradually slow down, pulling over on to the shoulder, as best I could because it was a very small shoulder, and the freeway was a very busy, fast freeway. Getting out of my car, I could see why the driver was so determined to catch me – my driver’s side rear tire was flat, and I had no idea, thinking that the problems I was having driving were due to the wearther, and frankly, not paying enough attention to what was going on around me.

Well this was a first for me and I pulled my manual out, and looked at the little tire wrench and the little temporary they give you, but soon realized that I had no interest in playing “Kiss my Butt” with all the semis driving past. I called 911 who sent a tow truck out to haul that selfsame butt to a tire place to get butt’s tire fixed. Seems I ran over a nail somewhere. Also seems that if I had continued as I was in the bad weather, according to the tire person, I might have run into considerable problems.

Thank you, Mr. Truck Driver, who ever and where ever you are.

Getting home yesterday later than expected and tired, I do what I usually do in the evenings and caught up with the weblogs I enjoy reading, including Loren Webster’s It was the Worst of Times, following from his earlier It was the Best of Times. In his first essay, Loren talks about Christmas past when he was a child and getting his first train one morning, and the joy he felt, and I felt tears in my eyes because I remember that same type of Christmas, but in my case it was a tricycle. I then read his second essay where he talks about Christmas spent in sadness and despair, in pain and in loss. He writes:

Unfortunately, I have even had some relatively sad Christmases after these two, Christmases without parents who had recently died, Christmases without children who were on the other side of the state. By now, Christmas has been permanently tinged with bittersweet memories that are now as much a part of the day as the magical moments I spent in the comfort of my parents’ home, untouched by divorce or tragedy for nearly twenty-two years.

Bittersweet memories. It was as if Loren had reached into the core of me and exposed the sadness and loneliness I was feeling as the holiday approached, bringing with it faint shadows of happier Christmases past; forcing me to face my increasingly dark mood.

Each year at this time, whether we will it or not, Christmas memories are exposed, laid out until the beginning of our time like the rings of a tree blasted down by lightening but never dying: this year was a good year, that year was not. But I didn’t want to look at Christmas this year, or to add another sad Christmas memory.

I sorrow with friends at their losses this year – Doug losing his father, Liz losing her brother-in-law – and I kick a bit because it doesn’t seem fair that these losses should happen now. However, as much as I felt sorrow for Doug and Liz, I felt pity for myself, more, and this is a darksome thing at any time of year, much less Christmas.

Isn’t there some kind of life guarantee, that Christmas is only supposed to be happy?

At times, life’s bitter threatens to overwhelm us with the sadness and the loss and the despair, but there is something within us, that echo of the child on Christmas morning, or the beginning of Chanukah, or the feasts of Eid al-Adha, or Dewali, or Kwanzaa, or the Lunar New Year, that brings with it the hope and the joy: the sweet that complements the sadness, as the sadness complements the sweet. Though joy is, as Loren writes so beautifully, fragile and ephemeral, it is enough. It must be enough.

No guarantees with life, you get what you’re given, including bitter events thrown our way, like the nail in my path on the road. But just as with my guardian angel warning me of my flat, or a train on Christmas morning, life also throws us joy and hope and goodness. We have no control over life’s losses or disappointments or gifts; the only control we have is how we live: whether we choose to embrace the bitter, or the sweet. Ultimately, that is the measure of all of us.

I will spend my Christmas on the road, alone, this year and this memory will form another ring and overall add to the texture of a life – and this is good and a gift. First, though, I have to get my tires checked and make sure they can handle a long journey – that the repair will hold, though I have no doubts it is good.

When my tire was repaired, the person who fixed it brought me the nail they found. He chuckled a bit when he pointed out the shape of the nail, which I decided to keep, as a memento. 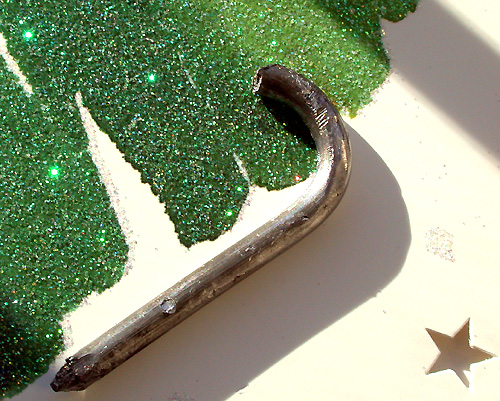