A two day trip to the Ozarks can seem like a week, and I mean that in a good way.

Sunday I drove down I44 to 63 and then eventually to a series of back country roads where the only company I had was the ubiquitous white pickups and motorcycle riders. The recent rains have saved the Ozarks and by the rich green color, I think we’ll have a good fall, at least in the hills. And I didn’t kill one creature as I covered the windy, hilly roads, which we can count a good thing.

Sunday ended up being hot and like other Missourians impacted by the high gas prices, I kept the windows down the the air conditioner off. I developed a habit of driving one handed, the other resting on my door, which I think makes me look rather wordly, especially when the wind is blowing through my curls and I’m wearing my Big Sunglasses. Of course I ended up with a truck driver tan–one arm burned a deep brick red, while the other is a pale honey color. Or dead fish, if you prefer.

Fish. Fish was the operative word this weekend, as everywhere I went I talked with people who told me stories or who fished. Can you imagine a better weekend?

I stopped first at Rockbridge Mill, arriving in the early afternoon under 90 degree sun. Few of the pictures came out but I got a couple: one of the mill, and one of a very lucky angler. 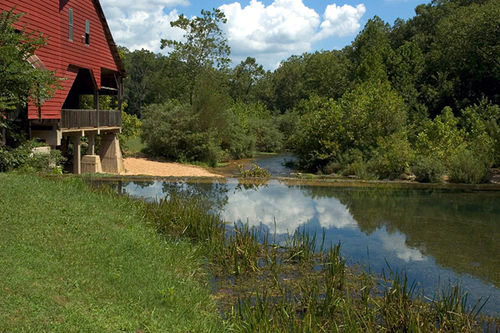 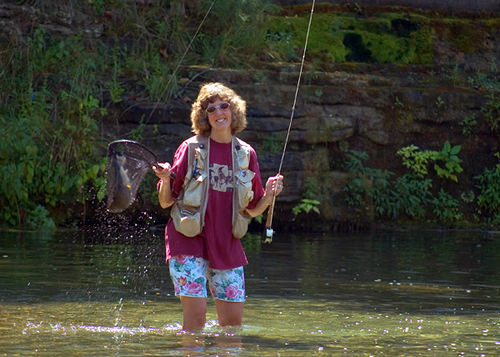 The water was low, which wasn’t surprising for this time of year and the drought we’ve had, but it was high enough for the trout to move, and as I got to the falls, a lady who was fishing had just pulled in what looked to be a monster fish. She was kind enough to pose for the picture, which was one of my favorite from the trip.

She said she’d gone out for a relaxing hour or two of fishing, but no sooner had she put her line in then a fish caught it, and she was finished in 10 minutes. She was pleased at catching the fish, but since the river is ‘catch and keep’, she had to stop at the point. I think she was disappointed at having success come too quickly. There are people who fish to catch fish; then there’s the lucky bastards.

From Rockbridge I followed more windy, hilly back country roads to Hodgson Mill. I had read it was under restoration, and was pleasantly surprised to see it fully restored. The sun, though, was just too bright and I really couldn’t get a good picture, and had to settle for a photo of the watercress growing along the spring. 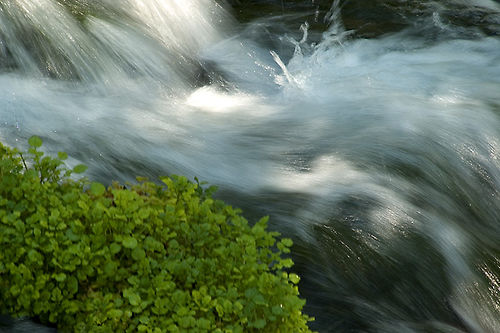 From Hodgson to Dawt, where the place was full of innertubers, but I had a monstrous headache by then, so I didn’t stay long, and headed to 160 to Branson.

I was lucky to have light traffic my entire trip, which was good because 160 is nothing but 35MPH corners, which can be fun to drive, but can also be exhausting at the same time. Happily Branson is odd enough and colorful enough to wake the dead, much less a tired driver.

What can I say about Branson? It is a town that is based on early tourism because of the nearby lakes, such as Table Rock lake. As it grew, though, it morphed into something really different: a town carved into the hillside above the lake, full of hotels and inns all decorated to a theme, full of shows. Each hotel, inn, store, has a videoscreen that displays bits of the shows currently playing. And neon lights, of course. It’s like Vegas, but without gambling.

I got lost twice, because I would be driving along, mouth open as I was blasted by all the videoscreens, and would miss a turn. When I finally got to the hotel where I was staying, Welk Resort, it was late afternoon and just starting to rain.

The hotel clerk was exceptionally nice, and when I told her I was out ‘milling’ she told me about the mill in use at the College of the Ozarks (more on this in a separate post sometime). As we talked, I could hear a tapping against the window and we were both surprised when we found ourselves in a monstrous storm. I quickly unpacked my car and in my room watched as we were hit with hail, and microbursts grabbed the poolside furniture and tossed them about. It was a really nice show.

I walked around downtown Branson for a little while, taking a few pictures. They don’t do the place justice. It is a one of kind place. I wish, though, I had grabbed a picture of the Peace Frogs Cafe. Next trip, it’s on my must see list. 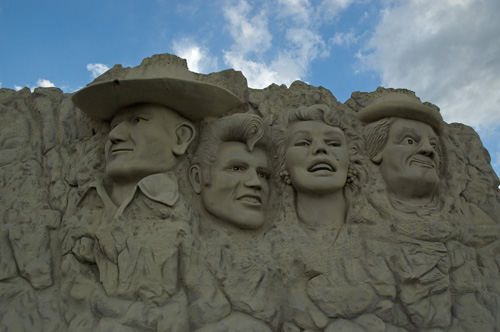 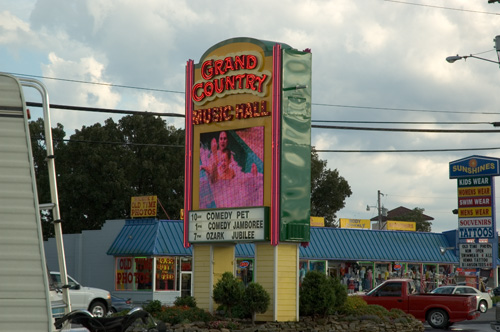 I’ll cover the next day in a separate post.