When working on a book, normally I can produce the chapters fairly consistently. However, with the RDF book, I’m having a bad case of writer’s block with one of the chapters. I can’t seem to sit down, sit still, and finish it. Tomorrow (well, today), no online time, no blogging, no googlewhacking, no cross-blogging, no Google Instant Messaging — finish the chapter. Do or Die. And if I don’t send out my W3s and W2s and other tax forms by end of day tomorrow, the revenue people will come and cart me away — for real.

I think one of my difficulties with the chapter is that I need a break from the city. I love this city, it’s so beautiful. And I love city life, though if I were rich, I would live half of my time in San Francisco or Boston or New York, and the other half in Vermont or Cannon Beach, Oregon. (So when my books publish this year, you’ll all have to buy at least two…of each. Call it the “Run the Bird out of town” fund.)

Still, regardless of how much I love San Fran – I – Need – A – Break – From – This – City! You can put that into a Google Instant Message and send it!

On the Australian home front: Jonathon — taking time off from swimming in the warm summer sun over the land of Oz — wonders if the next time I posted, it would be from Camp X-Ray in Cuba. I don’t know, there is a  resemblance. But the resemblance is only skin deep—I can walk away, anytime. Get in new car, head up the highway.

A tiny creature’s breath caused a tiny breeze that mixed with a drop of rain that bonded with other drops of rain that created a flood that re-sculpted a continent in a long ago time, eventually shaping the destiny of two peoples. And now members of one group of people sit behind razor wire and fencing in Cuba, held captive by the vanquisher of a war with no winners; and members from the other people, including yours truly, sit behind razor wire and fencing in San Francisco, held captive by fear of the vanquished.

‘Nuff! Any more of this “chaos” stuff, and I’ll lose my honorary membership in both the Meryl and the Australian Blogger web rings! 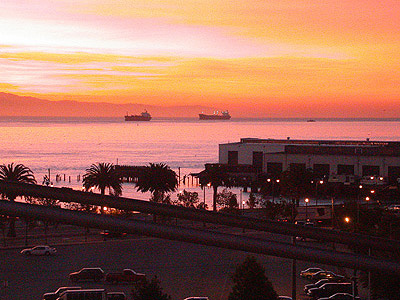