The weather was clear and hot during the trip, and the van had an air conditioner that either didn’t work well, or worked too well. The first day I wasn’t too tired and I thought about just driving straight through – 30+ hours – but I was concerned about hitting animals during the night.

The highlights of the trip were the ground squirrel colony, all of Wyoming, and my arrival in Missouri. The lowlights were the fact that I was allergic to the lotion the Park Hyatt provided, everything was at summer rates, and I passed too many accidents trying to make it through on I70 in Kansas City. And the spammers when I got home, of course.

I entered Wyoming at sunset, and the deep amber/red/purple light brought out all the nuances of the painted cliffs – astonishingly beautiful. I itched to stop and try to take a photo that captured the colors, but I remembered that supposedly I see myself as a writer, and perhaps it’s time to refocus more on writing, and a little less on photography. I was sorely tempted, though, when passing the plains, where literally the antelope were playing, just like in the song. Wyoming is at its most beautiful at times of great subtlety, at that first morning light, and that last evening ray.

Kansas was Kansas and hot and crowded with people heading home from the holidays. This combined with constuction delays slowed my travel and I didn’t enter Missouri until quite late. I really dislike driving I70 at night – the road’s bad and the truckers are worse – but last night was worth it because the car lights brought out the fireflies. The hills and the rocks and meadows by the side of the road were alive with fireflies, each adding their bit of glitter to countryside left gray and subdued.

If one wants to write fantasy, one should live in Missouri because I saw the dance of the pixies last night. Pixies, gnomes, and other creatures of the twilight live in these hills. I swear it.

When I got home I checked my email and when I saw that there were 15000+ emails, I knew we’d been hit by spammers. I thought at first it might have something to do with the hacker contest, because of the nature of the spam, but I think it’s your usual scum of the earth spammer. I was rather proud that I managed to handle the problem all by my little lonesome, including clean up the outgoing queue, my incoming email, and deal with the technology that led to this problem. Now, who said women can’t handle techie stuff?

Once I install new email software, the problem should be fixed, and I’ll be ready for the next server challenge.

I did do a lot of thinking on this trip, about some new things I want to do, about writing, Echo, RDF, and so on. I want to try something with RDF and Echo, but I’m not going to say what it is because if I do, someone with more time than me will do it first. I’m selfish enough to want to try this idea on my own, first, without someone else grabbing it before I have a chance. I guess this doesn’t make me a great team player.

I have an article of two for O’Reilly on RDF I need to finish, some legal paperwork to file and various other odds and ends. And I have a new domain – forpoets.org. I plan on dividing this into:

And so on. I’m hoping that if this works out, perhaps there will be a book or two in this concept. Or not, and I do it just for fun. I am really strongly motivated to get in and start the RDF for Poets articles – before someone else grabs these and does them first.

Writing and technology aside, I’ll always have time for photos, but I want to make them less of a focus. And I want to start expanding the types of photos I take – something besides “photos for picture postcards”. However, there was a rest area in Colorado that I did take a longer break at, and grabbed a few pictures. You know me and water and reflections. 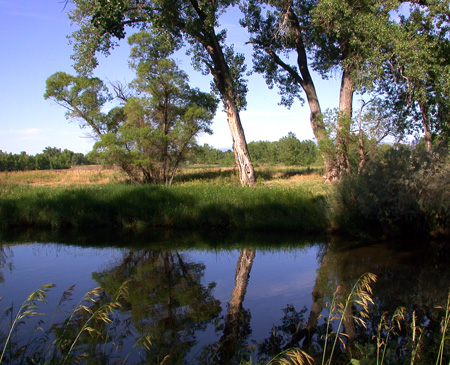