I visited the Butterfly House at Faust Park yesterday for the first time. I wasn’t expecting much when I arrived; I’ve been to other butterfly houses, and the number of visitors seemed to be disproportionately larger than the number of butterflies. However, when I entered the Butterfly House’s glass dome, within a few seconds a Dead Leaf butterfly landed on the shoulder of the man in front of me—a occurrence that would happen frequently to most visitors as you wonder the paths amid the seemingly thousands of delicate, flying creatures.

(I would have taken a photo but the hot and humid room had fogged all my lenses. It would take close to half an hour for the lenses to defog; just about the time when I was getting red faced and drenched in sweat, having foolishly dressed for winter. ) 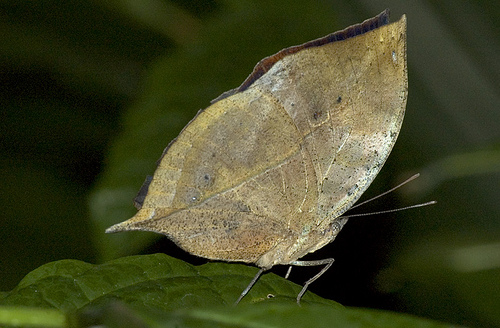 Even with the sunlight the conservatory was too dark to really get photos of the butterflies so I had to use my flash. This flattened many of the photos, washing out some of the color and detail. Still, the butterflies seemed to like the flash, and each time it went off, a few would fly toward me, and dance about my camera–too fast to photograph, barely slow enough for my limited senses.

I started wondering aimlessly around, being careful where to walk because the butterflies were on the ground as well as the camera bag, the trees, the flowers, the feeding dishes, the sides of the conservatory, and other people. It wasn’t crowded, which made photography easier. Two women had brought their two young children, and had some difficulty keeping them under control. The kids weren’t being destructive–just young and absolutely fascinated by the butterflies. The mothers apologized to me for the noise, and I said I didn’t mind at all. How can one get upset at the sound of such joy? 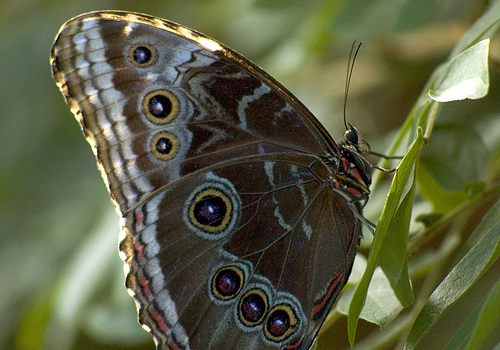 Still, when they left, and everyone else had left, I had the place to myself except for one of the workers pruning some of the bushes. I went through the place once more, and this time, perhaps because I was the only one there, I was surrounded by butterflies every where I went. Not just butterflies: exquisite moths, too. I had to use flash, and harshly, to be able to get photos of the Cobra Moths, but I didn’t care–I had to show you these creatures. The moths are larger than my hand, and beautifully colored, as well as camouflaged with the cobra ‘heads’ at each wing tip. 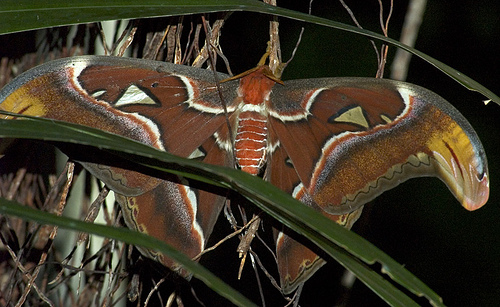 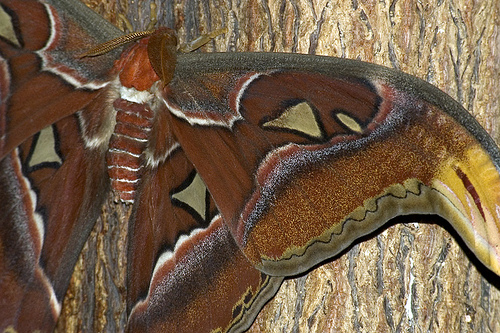 I forget at times that butterfly wing colors and patterns are a defense mechanism; orange and reds are the bright colors of poison; dots and swirls resemble owl eyes, or snakes; speckled greens and yellows allow the insects to blend into jungle greens, and meadow yellows. 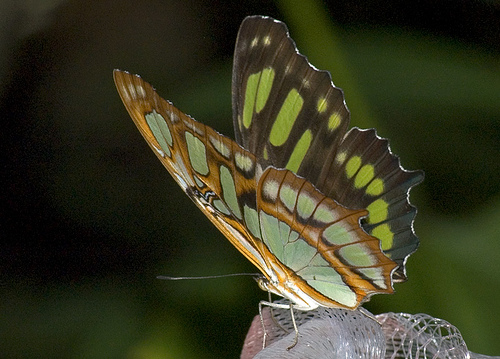 One of my favorite of the butterflies was the Owl Butterfly. I discovered its name from another photographer I chatted with earlier, when I had first arrived. He was a younger man, big, with blond hair, face pink from the heat. He had been there since early morning (wisely, I noticed, dressed in a light t-shirt). He was kind enough to give me some lens tissue to clean my lenses and then spent about an hour showing me butterflies, which he photographed with a film camera using a macro lens and natural light. He mentioned that the Butterfly House is a second home to him–that and the Botanical Gardens.

At first I took him to be a simple person; then I realized that he was, instead, a man of simple pleasures–not unlike the Butterfly Man in Sebald’s book, The Emigrants. I don’t have this book in my limited library, but a search returned the following:

The air was coming in from outside and we were looking over the almost motionless trees towards a meadow that reminded me of the Altach marsh when a middle-aged man appeared, holding a white net on a pole in front of him and occasionally taking curious jumps. Uncle Adelwarth stared straight ahead, but he registered my bewilderment all the same, and said: It’s the butterfly man, you know. He comes round here quite often. 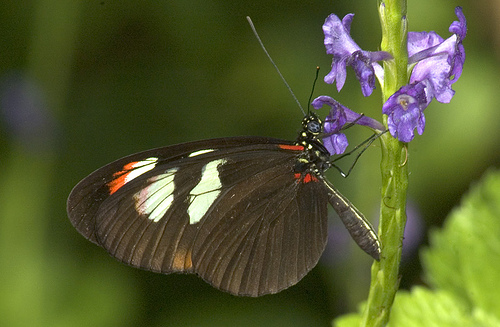 Further reading suggested that Sebald’s Butterfly Man is an allegorical reference to one of his favorite authors, Vladimir Nabokov, author of the acclaimed, albeit infamous, Lolita. Like Sebald, Nabokov was a man passionately in love with words. In a review of Lolita at Amazon, Simon Leake wrote: Nabokov once said, My pleasures are the most intense known to man: writing and butterfly hunting. It is this man, and this passion, which is threaded throughout Sebald’s Emigrants, as a review from a reader at Amazon describes:

Sebald is never without his playful, even absurd, side, and it is present in this book as well. Running through his narratives, and culminating in the memoir of Max Ferber’s mother, Luisa, are allusions to “the butterfly man.” In Ferber’s section, “the butterfly man” is a boy of about 10 who chases butterflies in the German resort town of Bad Kissingen. This man is clearly Vladimir Nabokov, for the scene described is exactly the same as one described in Nabokov’s own memoir, “Speak, Memory.” Whether muse or mentor, “the butterfly man” holds great significance for each of Sebald’s characters. And, who but Sebald would have had the imagination and creativity to braid, like a silken thread, the spirit of the most celebrated of all literary emigrees throughout this book?

As in all of Sebald’s books, photographs are an integral part of the work and, once again, rather than adding clarity, they seem to blur the boundaries between fact and fiction instead. What is real? What is not? With Sebald, we never really know. 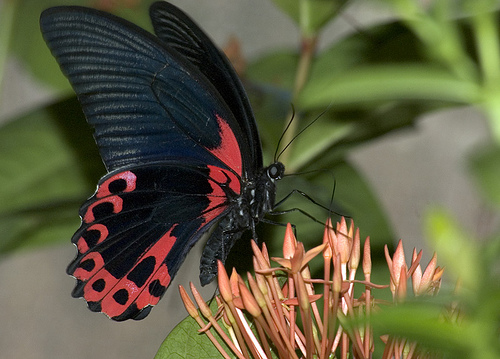 Just before the exit at the Butterfly House is the Miracle of Metamorphosis display. Here, chrysalids from throughout the world are carefully hung and nurtured. No matter what time of day, there is always at least one butterfly being born in this display. When I was there, several owl butterflies were getting ready to take wing. One could see the entire life of a butterfly, from larva to chrysalis to butterfly if one wanted to visit over a week at the Butterfly House. But not the death, though. I imagine that workers scour the plants nightly for butterflies that have died, removing them for mounting, study, or disposal. It wouldn’t do, you see, to have the walks littered with the fragile wings of desiccated butterflies; or corpses of moths hanging from the trees.

Before I left, a Blue Morpho butterfly I had been trying to photograph with its wings open, trailed by three Paper Kites and several Red Lacewings suddenly flew around me in a spiral that started at my knees, circling round and round until above my head–vanishing joyfully into the dark depths of the bushes above and around me. I didn’t get a photo of their flight. I didn’t even try. 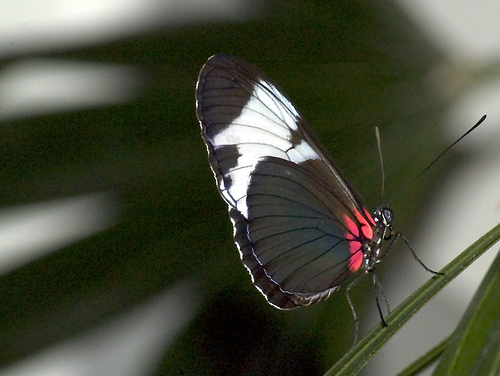