I have to return to Baldur’s posting, Death of the Blogger, and his discussions about the dangers of memes, those Thought-viruses, which have undermined the craft of academia (referencing, research, analysis and debate) and doomed most of academic practice into irrelevance. The same memes that Baldur sees threatening weblogging:

The meme-plague is the only thing which can destroy the weblogging revolution, murder it in its tracks.

However, it’s difficult to figure out how to proceed, because even a rejection of memes becomes a meme itself over time.

Last year we waged a battle to pull weblogging out from under the link-and-comment crowd, and breath fresh life into it by opening the doors to communication. I pushed comments and trackback as deligently as any dealer on the corner selling crack. I was joined by others just as interested in establishing a community online, and we have succeeded. Sticky Strands are here to stay.

I write, and Scott comments, and then Dan comments, and possibly Mark. Karl writes in response, and Liz, and Phil reply and various folks chime it, and it’s all Good. The community that grows up around the conversation isn’t exclusive, as anyone can trackback to the posts, anyone can comment. We are self-forming.

Power to the People. If we didn’t topple the empire built on the Link-and-Comment, we at least irritated it enough to be noticed. “Hiya! Just passing through. Don’t mind us. Continue doing whatever, hmm, it is, ah, that you’re doing. I’m sure it’s all very interesting…to someone.”

We dripped scorn as we enabled the technology to build the neighborhoods. We raised our lips everytime someone introduced a quiz. We lapped up the media spotlight. We googled and daypopped. We brought up ‘cat’ as our secret insider joke, and it was funny.

We asked each other questions and we debated on topics small and large, and with the same level of ernestness regardless of whether the topic was the new Movable Type release, Creative Commons licenses, sexism, Postmodernism, the beauty of ugliness, or the War in Iraq. And we are eloquent, and learned, and profound, and well written of that I have no doubt. I am surrounded by people who are, in a benevolent sense, scary-smart.

Still, too much of anything is not a good thing and it seems lately, as if we’re all stuck in the strands, caught in the web of our weaving. I look back on my recent posts and find that lately all I talk about is weblogging, and all I’ve done is link and comment.

Perhaps we laughed at the old school too soon. Perhaps the Original Meme of Weblogging, like the Original Sin of Man, still exists, but has gone underground.

Lately, when I stumble across a weblog posting that writes in-depth on something of personal interest to the author but completely unrelated to whatever is the ‘hot topics’ of the day, I just sit and savor it as an unexpected treat. Treat? It’s as if the more we communicate, the less original writing there is. We’ve become those people at parties, you know the type; the ones who in the interests of making sure someone isn’t left out, holler out to the person standing in the corner, “Hey, get your butt over here. Join the conversation!”

But what if the person in the corner prefers to be in the corner? What if they don’t want to join the conversation. What if I don’t want to respond in comments? What if you don’t want to join the cross-weblog conversation? Whatever happened to the tales of Korea, and the story of World War II? Whatever happened to the simple discussions about personal belief, and the stories from our youth? What if today, I want to write about a river flowing past a field and under a bridge in the dead of winter?

When did communication go from being something shared and warm and glorious to something dutiful and required, like sex between a couple after the love is gone?

But, but, there’s always the but…

I was never one for poetry because poems seemed so intellectual and my roots as a high school drop out are never very far. Yet through Loren’s gentle introduction to the poets he loves, I have found not only a new appreciation for poetry, but an actual liking for it; not one based on trying to impress anyone, but based on sheer joy in the music and artistry of the words. Without meaning to put Loren to the blush (but then, embarrassing people has never stopped me in the past), I can’t speak for his previous students, but he made an impact on a 40-ish unemployed computer consultant who writes technical books and hikes a bit.

No matter the skill and the introduction, I never would have looked at Loren’s writing and the poetry if I hadn’t ‘met’ Loren through comments and cross-blog discussions. I would have seen the poetry and tuned out, instantly. The same can be said on so many topics I’ve been exposed to, from movies, to books, to marketing, to religion, and yes, even postmodernism.

The Meme bring. The Meme taketh away.

Jeremy Zawodny recently wrote a posting called The 10 Habits of Highly Annoying Bloggers, which, as you can imagine quickly went from “posting” to “meme” status. As would be expected with this type of posting, much of the humor attached to it appears in the comments, which is as it should be. Other than wondering what a ‘FontBitch’ was, and deciding to use this as my ‘about me’ link, it was the survey that Eric’s Weblog posted about the 10 habits that truly fascinated me. This survey allows people to ‘vote’ on which of the habits is most significant to them.

According to this survey, people were vastly more annoyed by the mechancs of weblogging, such as comments, RSS, font size, and the about page, then they were about the person providing original content. Original writing lost out to FontBitch and comments, RSS and “about me”

I have seen the Meme, and it is us.

Which leads me back to Baldur’s posting and the discussion of memes and original writing. I wrote a great deal in this posting, much more than the …short volleys of 80 word meme brain-boils where the thought-virus biomass simmers under the thin skin of comments and trackbacks. However, I’ve only referenced Baldur’s writing at the very beginning and the very end. And this was supposed to be about Baldur’s posting. And it is. 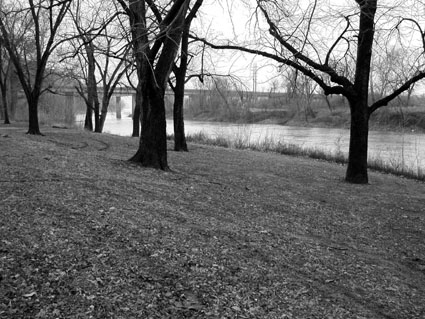