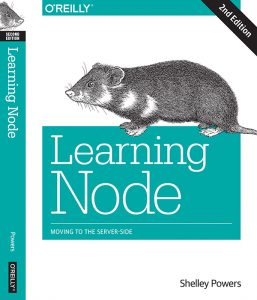 Learning Node, 2nd Edition is now in production and should be hitting the streets within a few weeks. We had a bit of excitement when Node 6.0 was rolled out, just as we entered production. However, this edition of the book was specifically designed to accommodate Node’s rather energetic release schedule, and the book survived with only minimal changes.

In this edition, I focused heavily on the Node core API, rather than third-party modules. I figured the book audience either consists of front-end developers working with JavaScript in the browser, or server-side developers who have worked with other tools. In either case, the audience wants to know how to work with Node…not this module or that. Node, itself.

My one trip into the fanciful was the chapter on Node in other environments. In this chapter, I had a chance to introduce the reader to Microsoft’s new ChakraCore for Node, as well as using Node with Arduino and Raspberry Pi, and with the Internet of Things (IoT). I figured by Chapter 12, we all deserved a special treat.

The book’s Table of Contents:

Preface
1. The Node Environment
2. Node Building Blocks: the Global Objects, Events, and Node’s Asynchronous Nature
3. Basics of Node Modules and Npm
4. Interactive Node with REPL and More on the Console
5. Node and the Web
6. Node and the Local System
7. Networking, Sockets, and Security
8. Child Processes
9. Node and ES6
10. Full-stack Node Development
11. Node in Development and Production
12. Node in New Environments

A more detailed TOC is available at O’Reilly.

I had a good crew at O’Reilly on the book, and an exceptionally good tech reviewer in Ethan Brown.