The photos in the last post were from a hike I took to Crane Lake on Sunday. I read in this new hiking book I bought, that it was an ‘easy/moderate’ hike, with a north loop of 3 miles around the lake; a southern loop 2 miles in length, with an end at the dam and around yet another shut-ins.

I had hoped to make both loops, it being easy and all, but ended up getting lost on the way. I ended up on a dirt and rock road leading into the interior of the Ozarks, past national forest land and small, old homes tucked into hills and hollows. The homes had signs posted on them–the usual with ‘Keep Out’, and ‘Private Property’. All except one that had a skull painted on a black board with ‘Keep out…or else’.

Finally I found the parking lot for the lake. It was cold Sunday, but a beautiful sunny day, so I was surprised not to see anyone else there. Still, I like having hikes to myself, so made no never mind to me. (That’s a genuine Ozarks expression — I’m adapting.) It was too late, though, for both loops and I’d have to settle for just the north one around the lake.

The hike started out easy, until reached the first hill to climb down. I found the ground covered with inches of dead leaves, and I couldn’t see the footing. I ended up sliding on the gravel and tripping over rocks. The little monkey in the back of my brain was wide awake, and though it wasn’t banging at my head, it was trying to make me aware that all journeys have an option: to go on, or turn back. I thought about turning around, but remembered that the hike was ‘easy’, and I wanted to see the shut-ins. 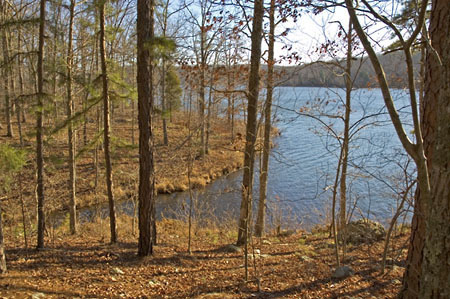 The rest of the trail worsened, obstacles buried under too many leaves to see, twisting my ankle, and constantly having to catch at the hiking stick to keep from falling. Again I thought about turning around, but figured it might be easier returning on the other side of the lake. Besides, I wanted to see the old dam, take some photos of it.

The trail turned into the forest away from the lake, and connected up with the Maple Creek section of the Ozarks Trail. It flattened, which was good. Unfortunately, while keeping my eyes down to avoid rocks, I also managed to miss the trail markers. Another aspect of hiking in the winter, just after the leaves fall, is that they can obliterate an already hard to see trail. 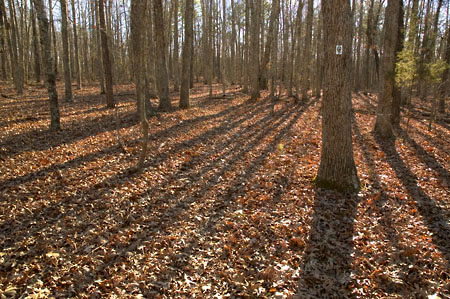 No worries, though — when you hike around water, you can always find the path again. It’s just that sometimes when you go off the path, the way isn’t always easy going. Still, I headed in towards the water, found the dam, struggled through the trees and branches and grabbed a picture of it from the side, turned around, and noticed a half torn off white diamond on a tree. I’d found the trail again.

Above the dam was the beginning boulders signaling the shut-ins, but I couldn’t see any indication of where the trail led. The sun was going down, a lot faster than I thought it should, and the path was further obscured by the long shadows of the white oaks I was walking through. Long shadows are not a day hiker’s friend. 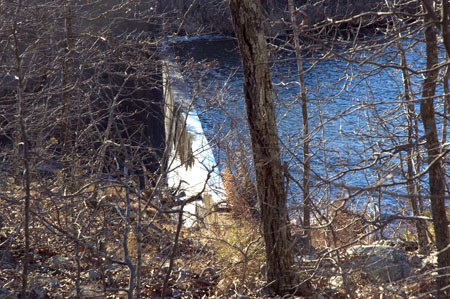 I didn’t need the monkey to tell me to turn back–my common sense had finally decided to make an appearance. However, while exploring around, I had again lost the trail. In fact, heading back to the car, I lost the trail a third time, and managed to get back to the car just as the sun started to set behind the hills.

I was a wreck, too — absolutely exhausted, badly overheated from the cold weather gear I was wearing, dehydrated because I hadn’t taken enough water, and barely able to walk after twisting about on the rocks. And I all I could think of was how hungry I was, and how I wanted some onion rings. Water, too. But I wanted onion rings. Yes, indeedy — deep fried, corn dipped onion rings, fresh out of the oil. I ended up stopping along the way, and bought some from a fast food place and wolfed them down. I then came home and promptly became sick.

After 24 hours of oranges and bananas and rest, I checked the hiking book again, actually reading the front matter this time, and found that though a hike in the book might be rated ‘easy’ this was the Sierra rating system, which is based on elevation and length of hike — not ground surface. You have to read the hike details to get a better idea of trail conditions. According to the details on Crane Lake, though the elevation change is slight, the trail itself is ‘rugged’ and often times, easy to lose because of the poor markings.

The author also mentioned in the front matter about avoiding hiking in conservation land during November and December, because of deer hunting season. I had totally forgotten that Missouri Conservation lands allow hunting, and sure enough, Sunday was right in the middle of hunting season. However, not Iron County, which was where I was hiking. No hunting was allowed at Crane Lake.

Well, no hunting, except for the feral hogs known to be in the area. Feral hogs. I’ll be damned.