I walked around my old San Fran home near the Bay Bridge this morning. In particular I wanted to see what they did with the park they were finishing along the Embarcadero by my place.

The park itself is rather nice, with simple green hills and flowers and nice chairs for people to sit on and watch the water. On some of the cement blocks bordering the green, bronze imitation octopus and shells were embedded in the cement, for those tourists who, I assume, were too dense to notice that they’re by the Bay. One or two embedded items might have been nice — several dozen repeating in a pattern, like tile on a kitchen floor isn’t. I’d have taken a picture, but I has to ask myself, Why?

Still, these were not the jewel of the park, the center of attraction. On no. That was reserved for a 60 foot tall bow and arrow embedded into ground.

I stood there for some time looking at the supposed feathers on the arrow, trying to figure out why San Francisco was using a Native American theme for what is a water-based parkway. I assumed that’s what the bow and arrow symbolized. Still, it didn’t make sense –after all, San Francisco has never had much identity with native American history, other than the tribe that took over Alcatraz that one time.

I also wondered if the statue had increased the traffic accident count on the Bay Bridge, with its full view of the, urh, artwork.

(When I came back to the hotel to rest in the early afternoon — still feeling the effects of the drive and the moving yesterday — I looked the statue up. It’s called “Cupid’s Span”, and symbolizes San Francisco as a romantic city. Oh. Good. God.)

After the bow incident, I explored the newly renovated Ferry building, and that was a real treat. Lovely restoration, and the use of the space for upscale dining combined with hometown food purveyors like Acme Bread (Yum! My favorite!) is a great use of space. Not to mention the Farmer’s Market. In fact, I’m heading back this evening for the Thursday night Farmer’s Market, where I hope to pick up dinner. Following, I’ll wonder down to Pier 39 and beyond, saying hi to the Pelicans and seals, and the guys painted silver.

I thought about walking down to the bow and arrow one more time, taking a photo of it in the sunset light, which could only help it (nothng can make it worse). But then I thought — Why? Hopefully I’ll have other pictures for you tonight. 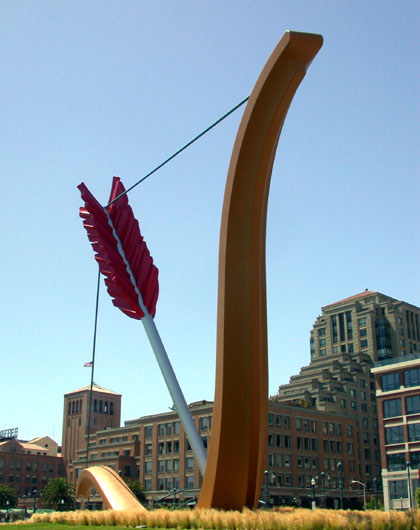