One of the boxes I brought back contained my t-shirt collection — a set of t-shirts that I’ve collected from various events over the last several years, but have never worn. If I had to put together a curriculum vitae, I would do so by taking photos of each of my shirts, putting them into a PDF album to be printed or attached to an email.

There’s the t-shirt I received for being one of the top 50 finalists for Microsoft’s Activate the Web contest. This contest, held in 1996, was used to launch Microsoft’s ActiveX web technologies. I and other contestants had to incorporate ActiveX technology into our web sites in some way. Mine was Hot Pink, using an ActiveX control to interactively tell the web page reader what technology was being used in the page. Coincidentally, Hot Pink was my first introduction of the “Flame of Knowledge” motif that I’ve used ever since, including Li’l YASD and eventually Burningbird.

There are t-shirts from several conferences where I gave presentations, including Internet Worlds and XML Dev-Cons, and even one from O’Reilly’s original P2P conference. Now that was a great conference — last of a kind, last of an era.

I have a Mozilla Hack t-shirt that the Mozilla team personally delivered to one hotel room where I was speaking because of my early promotion of Mozilla as a development tool and not just a browser. Back then Mozilla was getting a lot of flack for not delivering a browser right now

I have another t-shirt from Sybase to commemorate creating a sample application using Powerbuilder 5.0 that was included on the disk with the product. That application was a dynamic inventory control system that would allow a person to define their own categories of inventories items.

Groove gave me a t-shirt when I was meeting with the company about writing a possible book on the product. I also have a Microsoft Site Builder’s shirt, an Amazon Associate shirt, several from O’Reilly, and other shirts I’ve picked up for one reason or another.

My life as a t-shirt. Well, it could have been my life as a yo-yo or hacky sack. 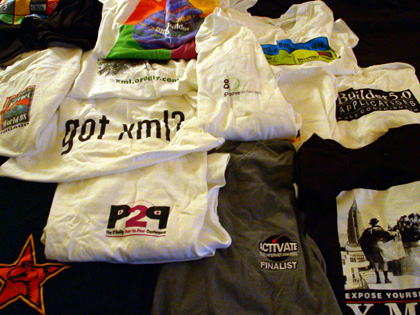