I’m at work on a longer essay for later today or tomorrow on another topic, but I wanted to make a comment about the gay marriages in San Francisco.

Watching the story online and on TV about Gavin Newsom’s carefully planned act of defiance against the State of California, the weekend of gay marriages in San Francisco, the ecstatic faces of the people married – among all the bad news lately, it is a true bright spot.

And it’s not just Newsom – city officials volunteered their three day weekend in order to grant marriage licenses and perform weddings. It was a pure delight to see it, and this is one of those few times I wish I had been back in San Francisco. I would have loved to throw confetti and rice over the newly married couples as they left City Hall.

And the weddings continue because judges have refused to issue immediate stays on the issuance of marriage licenses, even though two groups have tried to get them stopped.

And why are they stopping the marriages? What possible harm can it be to allow gays to marry? That isn’t going to encourage people to become homosexual. It isn’t going to undermine the concept of marriage for the straights. If anything, gays may bring a more stable element: some of the people who have been getting married have been together 30, 40, even 50 years. Fifty percent of straight marriages end in divorce. Exactly what have we done for the institution lately?

Look at this picture that I copied from the Chronicle – is this the photo of two criminals committing a crime against humanity? 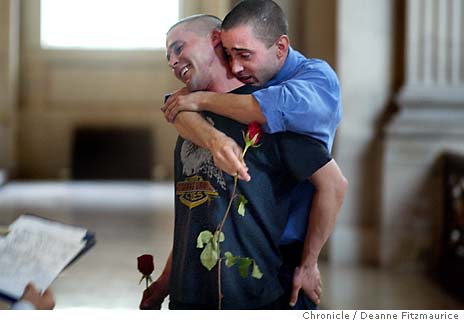 Only if your view of humanity is very narrow, and your sense of what is criminal is very wide.

And the stories. My favorite is the following, from the Chronicle:

Melinda McCallister, 25, and Jennifer Kemmet, 23, drove Tuesday from Los Angeles. As they got to the door of the clerk’s office at 4 p.m., they were told that they’d have to come back today because the office was closing for the day; the couple before them was to be the last one to get in.

They sat down and cried. The door reopened and a worker yelled, “Hey L.A.! ‘’ and let them in.

They emerged from City Hall an hour later with a marriage certificate in hand.

This news coming out of San Francisco, is the first news I’ve heard in a month, over a month, of the triumph of the human spirit, the fire of those who will not accept the dictates of a hypocritical society, and the goodness of people reaching out to other people.

How can it be so damn bad?

Governor Schwarzenegger, that poster boy for good heterosexual behavior, talks about how this is a violation of an act passed by the California voters.

“I support all of California’s existing laws that provide domestic partnership benefits and protections,’’ Schwarzenegger said. However, he said, “Californians spoke on the issue of same-sex-marriage’’ when voters approved of Proposition 22, the 2000 initiative that defines marriage as between a man and a woman. “I support that law and encourage San Francisco officials to obey that law,’’ he said.

The beauty of a country that’s a republic rather than a true democracy is that majority may rule, but minority have rights – and if California has decreed that gays may not be discriminated against, then this law is a violation of that basic right.

Fuck the majority who have nothing better to do then react in fear to change!

I have heard the most outrageous attacks against gay marriage:

“This will only serve to breed more homosexuality.”

“Marriage is a natural act, between a man and a woman.”

“Gays marrying will undermine the integrity of marriage.”

“Queers belong back in the closet instead of out in the open, kissing and things.”

That last is my own because most people won’t say this out loud, but you know that’s the true story behind the fear of gay marriage.

I remember one incident, walking home one night when I was in college, in Ellensburg a fairly conservative town in Washington. The Gay Students group had just broken up and I was following two guys who were holding hands. Just holding hands.

They heard my footsteps behind them and jerked their hands apart and hastily moved away from each other, both turning to look behind them in fear.

My god that people have to act this way in this country because others have such sad, pathetic lives that all they can do is interfere with the happiness, or needs, of others. My god, and that is the key isn’t it? My ‘god’. I bet it just burns you up when I use ‘god’ in lower case, as an average thing rather than a diety.

Why don’t you pass a law making this illegal?

No, the only reason I can think of for people to continue to get angry about gay marriage is that these same people are afraid of challenges to their sense of normalcy. They say:

Sex is between a man and a woman. A family consists of a mother and a father and kids. Marriage is for straight people only. Marriage is a holy state. God has willed this.

My world has been upset too much the last few years, and I can’t handle any more change in it. I want my normal life back. I want the terror to go away. I want the gays to fade back into the shadows. I want everyone to believe like I do so that my faith isn’t questioned and I don’t have to listen to anything that might make me doubt it.

Because if I once begin to doubt my faith, I may start to doubt every aspect of my life, and I can’t handle that.

But how do you keep them on the farm once they’ve seen Gay Pairee? 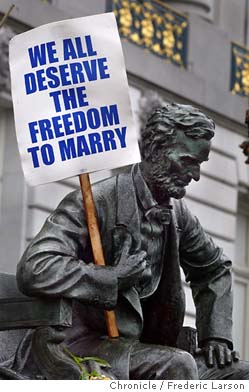 Too great not to pass on

From an SFGate.com story by David Kravets and Lisa Leff, AP writers:

The second judge told the plaintiffs that they would likely succeed on the merits eventually, but that for now, he couldn’t accept their proposed court order because of a punctuation error.

It all came down to a semicolon, the judge said.

“I am not trying to be petty here, but it is a big deal … That semicolon is a big deal,” said San Francisco Superior Court Judge James Warren.

The Proposition 22 Legal Defense and Education Fund had asked the judge to issue an order commanding the city to “cease and desist issuing marriage licenses to and/or solemnizing marriages of same-sex couples; to show cause before this court.”

“The way you’ve written this it has a semicolon where it should have the word ‘or’,” the judge told them. “I don’t have the authority to issue it under these circumstances.”…

Lawyers for both sides then spent hours arguing about punctuation and court procedures during the hearing, which was still continuing late Tuesday afternoon.