Recovered story. I no longer have the collection, but you can see photos of what once was.

I spent yesterday taking photos of my rocks for the auction, but I’m never going to get this job finished if I spend all day and only have a few photographs for my effort. I can’t help myself, though — I’m having too much fun.

I started using the traditional mineral photographing techniques, as outlined in Jeffrey Scovil’s excellent Photographing Minerals, Fossils, and Lapidary Materials. However, somewhere along the way, I began to improvise.

For instance, I found that my TiBook makes a great backdrop for some of the harder to photograph minerals such as Azurite and Dioptase. I don’t have my studio lights and am having to use natural light, which makes my job much more challenging. Both black and white backdrops desaturate these minerals extremely rich hues. However, the neutral gray color allows the colors of the samples to come through.

(Or at least, that’s the excuse I’m using for such blatant disregard of mineral photography rules.)

As a backdrop for this yellow crystal, I used the paper the rock was originally wrapped in before I decided to use soft foam, instead (better for shipping). 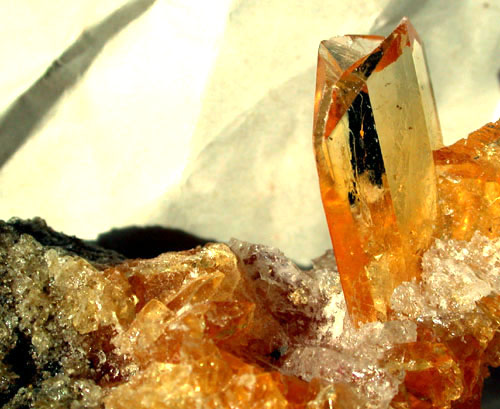 Notice that I called this mineral ‘yellow crystal’ rather than giving it a name? Well, I have to confess that I have no idea of what this crystal is. In fact, I have two minerals I can’t classify in my collection, and a third that I can’t tell is a fake or not.

This might surprise you: that a mineral collector can’t identify all the minerals in their collection. However, I purchased the mystery rocks at the Tucson mineral show early in 2001 and carried them home with their little labeling tags. When I got home, I found the dot-com I worked at had died while I was gone. I was distracted and didn’t record the purchases in my mineral ledger. Then I ended up getting divorced a few months later, and moving to California soon after that. During the move, I wrapped the rocks and stored them, losing their little tags.

Only now, going on three years later, am I looking at the rocks and I haven’t the foggiest what the yellow crystal is. Or the identity of a beautiful green crystal I haven’t photographed yet. I think the yellow is calcite, but the specific gravity is all wrong, and the luster doesn’t feel right. And its rare for calcite to form bladed crystals, though calcite will form into pretty much any crystal form.

I don’t have the materials to make a streak test, nor do I have the acids to see if the mineral behaves appropriately when exposed to this substance. I suppose I could hit it with a hammer to test its hardness, but that seems a bit extreme.

There’s the old taste test, and I remember when I took geology in college that we had to use taste during our mineral identification exam (boy, those were the innocent days.) However, there’s drawbacks to using taste on an unknown mineral. For instance, another crystal I photographed yesterday is this nice piece of Chalcanthite: 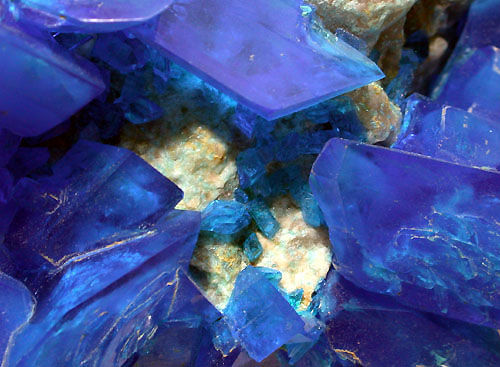 Pretty, isn’t it? It’s also toxic. In fact, if you bend your minds back to chemistry class, you might recognize this crystal if your class ever left a solution of cupper sulfate to evaporate over a few days. Crystals of Chalcanthite will form, which is one of the three reasons why people hesitate to have this mineral in their collection. First, it’s water soluble, and fine examples have been known to reduce to dust eventually. Then there’s that toxic thing. Finally, how can you tell the difference between lab grown crystals and naturally occurring ones?

This sample is one that grew naturally, but it was instigated by humans — it formed in a copper mine as a result of the mining actions.

While I photograph the minerals, I find myself just looking at them and this accounts for much of the delay. I hold them to light, move them around to watch the glitter on the surfaces; look into their depths to see the fractures and inclusions. Gloat in the rich and subtle colors. I like to feel the surface because the stones each have a different tactile feel to them. My favorite is the apophyllite, which has a soapy feel to it, and an iridescence that reminds me of those bubbles we used to blow as a kids.

Some of my samples were hot glued into little boxes and stands when I purchased them, and the first thing I did was remove these. I dislike having any form of container around my rocks. How can I feel the rock, or look more closely at it with all that protective gear in the way? Mineral collectors would be appalled to hear what I’m saying — crystals can be impacted by the oils on our fingers, the light or the even the air around us. Holding a crystal increases the chances of it being damaged. What am I thinking?

But look at this opal from Oregon. It’s like a bit of the river from which it came, but petrified and preserved for all time. The feel of it is wonderful, and I wish there was a way I could attach that feel to this page so you can experience the texture — like candle wax dripped on velvet. It’s a very sensuous stone, and the colors become so real when you hold it up to the light. 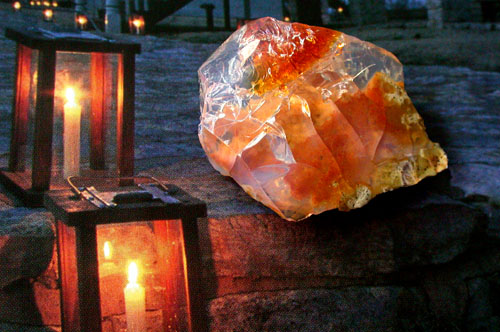