In addition to all of the tribal dancing, singing, and story telling, the Pow Wow also featured a Fire Dancer from Mexico. Fire Dancing is a re-awakened Aztec dance that involves, among other things, putting parts of one’s body into a fire.

I thought it was interesting that before this dancer started, he kneeled on the ground, prayed for a minute, and then crossed himself. The irony of this, as you’ve probably already guessed, is that the Aztecs were basically destroyed by the Spanish, as they embarked on a mission as conquistadors to spread their Catholic religion; stopping along the way for a souvenir. Or two. 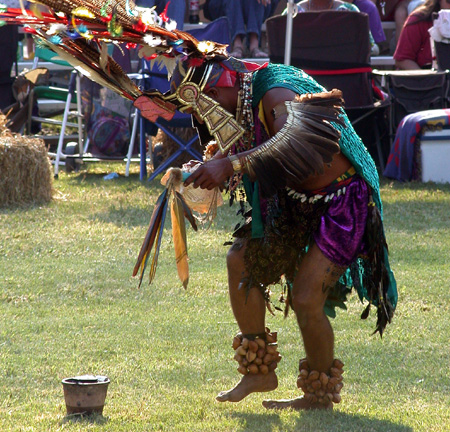 Speaking of religion, I wanted to extend AKMA congratulations on attending and presenting at BloggerCon, in a session titled Weblogs and their Spiritual Context. I still don’t care for BloggerCon and its associated focus on the illuminati, but I’m not going to rag on anyone for going. If people can afford it or can get sponsored, and they obtain some good from it, then I say more power to them. However, I still reserve my right to continue to rag on the conference itself.

As to the conference, I have to wonder about the following, included in the description of AKMA’s session:

Not only do bloggers have souls… — that’s an interesting statement to begin a description of a session on spiritual contexts and weblogs, especially after the discussions this last week. To be honest, I don’t see AKMA’s hand in this write-up, but regardless of who wrote it, well, all I can say tactfully in my tired state (Kentucky’s a bit of a jaunt from St. Louis) is hmmm.

More on the Trail of Tears, the Pow Wow, and additional photos later. 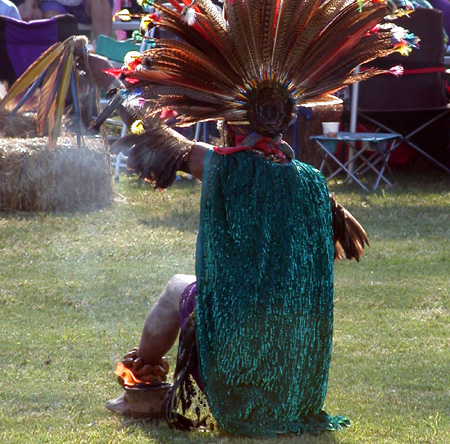 The new group weblog Open Source Politics had its first week, and one can’t help but applaud the quality of much of the writing that’s come out of this effort. Of course, I know two of the people contributing, Mike Golby and Loren Webster, and have enjoyed their writing for some time so this isn’t surprising.

As much as I applaud any effort that gets Mike and Loren the readership they both deserve, I’m still not fond of these group weblogs. Rather than expose important issues to a new audience, the decidedly liberal nature of this weblog will either attract those who are liberal in the first place and likely to agree; or attract those from the opposite viewpoint, looking for cannon fodder. I think those who are more neutral are going to be pushed away by the tone and focus of the weblog.

Speaking of politics, yesterday was the first of the Democratic candidates debate and though I know that people wanted fireworks, I thought all of the candidates were very responsible in focusing on Bush rather than each other. No candidate is perfect, but there were some good points raised. As for my political leanings, it’s no surprise I’m voting Democrat, but which specific candidate is between me and the button. I make no apologies that my focus is on removing Bush from office, rather than promoting any one of the Dems. I can say I don’t support Lieberman because of his hawkish outlook, and I don’t care for Gephardt because I think he sold us out when he stood behind Bush in the invasion of Iraq. Other than that, I’ll support whoever has the best chance to defeat Bush.

In line with recent discussion about politics and religion, the Pew Forum just released survey results relating religion and politics and voting in this country. Extremely interesting reading.

For instance, from what I can see from these results I would more likely to be voted president if I were Muslim than aetheist. In this country, we’re willing to concede a shared heritage from Abraham – reluctantly – but the non-religous, and one has to assume the polytheist and animist and other outsiders, need not apply.

In fact, unless there’s a drastic change in culture and attitudes about religion, it will be a cold day in hell before an aetheist is voted President in the United States.

I returned to the Missouri Botanical Gardens today to explore the sections I missed from this weekend. This time there weren’t many people about since the Japanese Festival was over. The sun also came up after a week of rain and a nice walk appealed. I forgot about the humidity that can follow a heavy rain.

The Garden is very beautiful, probably one of the best I’ve seen. I like the mix of modern but simple art work incorporated among the various gardens. I also like the nooks all over the park where one can get off the main path, sit a while and listen to the birds, look at the plants. The children’s garden has walks that only a child could go down, which I thought was a great idea. Parents could sit by the fountain and relax, and the kids could walk about in relative safety. Clever.

The rose gardens were on their last leg, which means the scent was terrific. That’s the way of roses, elegant to the end.

I took several pictures, but early afternoon bright sunshine is lousy light for photographs. Especially of flowers, which can have subtle coloring. I was framing a photo of the bridge that leads to the island that holds the sacred tea house when a couple walked on. I waited, they talked, I waited, they continued to talk. Finally the man got down on his knee, and I thought, “Why is he getting down on his kn… Oh!” I think she said yes because when he got to his feet, she threw her arms around him. No photos, though – that would have been rude.

It was a blah, blah day and it showed in my photos. I trashed them all. I think I need a long weekend, to see if I can rediscover my energy and weblogging zing.

Uh oh. I used the W word. I’m going to get spammed.