I have been lax with the next essay in the RDF Poetry Finder series, The Technician Sleeps while the Poet Speaks. However, I have not been lax in the effort.

For instance, there’s a good discussion on this at Renaissance Web, where I’ve been wrestling with some fairly tough questions. (Also other many good conversations going on including a one-button weblog publishing approach — stop by, listen, participate if you’re so moved.)

However, most of my time has been taken up with research. In particular, I’m finding it very difficult to find poems to demonstrate points I want to make, primarily because I need something like RDF Poetry Finder in order to find them. My repertoire of known poetry is very limited, and I hesitate to put the poets and poetry enthusiasts in the audience on the spot asking for poems where, for example, an owl symbolizes the soul.

So, as I wrestle away with this, please join us at the forum. Your interest and input would be more than welcome.

If any of you have experience with tick bites, particularly in the midwest, Missouri would be ideal, could you email me? I have a couple of questions.

Part of a massive ant colony in the woods near St. Louis. 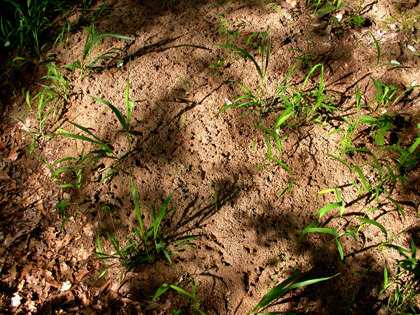 I’m not sure why, but the very mention of RSS tends to bring me out of my quiet corner, where I sit filing my nails while Burningbird does her thing. So, while she’s off cleaning house and trying to get the next episode of that RDF Poetry Finder finished, I thought I would just sneak in here, and add a new post. Just for fun.

There’s been considerable discussion about RSS for Weblogs, and RSS profiles, and XHTML in RSS and RSS and FOAF, and so on lately. In fact, if RSS were chum, you could walk on water, there are so many sharks circling about. Sam’s is a good place to track most of the discussion, so start here, then here and here.

Much good input, lots of great ideas from smart people. However, it struck me as I leisurely meandered through all of the juicier bon mots, that what the discussion needed was a little perspective.

I got to thinking about the possible impacts that could occur if the same level of energy applied to the discussions of RSS were applied to other areas of human interest such as science and the humanities. Based on this, I came up with the following, my list of things we’d be doing now, if only RSS energy was universal.

1. Next vacation I’d just hang about in the next neighborhood. Andromeda.

2. We would have a cure for the common cold. Unfortunately, 1 out of 20 people who take the cure die.

3. Men will finally understand why they’re from Mars and women are from Venus.

4. We’ll be using cold fusion devices to chill our cans of beer.

5. We find Schrödinger’s Cat. His name is Bob.

6. The next blogging get together will have 200,000 people attending, all teleporting in. The remaining 300,000 will just pick up the details from their minds.

7. Virtual sex would no longer be so virtual. No, I’m not giving details.

10. Lie-detecting glasses will enable voters to see when politicians are lying.

11. New political laws will be created to allow governments to exist without politicians.

12. Computers will be smaller than a speck of dust, and hard wired directly into our brains. We think, we blog.

13. Weblogging tools will incorporate a new feature called the “Oh Shit! I didn’t want to print that” quick erase.

14. Someone invents a penis stretcher that really works, and a pill that melts fat. Not long after, Vogue begins to feature plump, voluptuous women as the new sex symbol, and men start wearing dresses. Loose dresses.

15. Time travel exists. I have seen the future. I know how RSS ends. I’m not telling.