Arrr, me beauties! Cast your eyes on the beauty of the flag we be sailing today, for Talk Like a Pirate Day. Some seek to cast our maidenly efforts into shadow with their offerings but soon find themselves cast adrift, the scallywags. 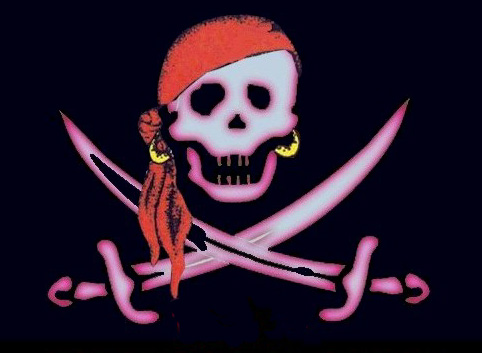 I know that today is Talk Like a Pirate Day, rather than just plain Pirate Day, but a history buff such as myself can’t go through the day without imparting a few nuggets of piratical lore. For instance, the flag that I started and that Elaine beautifully modified was actually an adaption of the flag that the pirate John Rackham used to fly. Rather than the traditional skull and crossbones, Rackham showed crossed swords beneath the skull’s head because, rumor has it, he was always up for a good fight.

As for the skull and crossbones, known as the Jolly Roger, rather than being flown to strike terror in the hearts of those about to be attacked, it was, in some ways, a reassurance – a promise that if the prey gave in without a fight, their lives would be spared. Maybe.

However, if a pirate flew a flag that was red in color, this was a signal that no quarter would be given, the pirates were out for blood. In fact, it’s been hypothesized that the name “Jolly Roger” was from the French joli rouge – pretty red.

So, what does our flag say? The crossed swords could signify that the women who fly it are up for a fight, but this message is somewhat softened by the gentle coloring and delicate detail, the tasteful bandana, and the elegant and stylish beaten gold earrings.

Perhaps what the flag is saying is that the women who fly it are up for a fight, but we’d rather not, thanks all the same. Or perhaps all it says is that though we may be deadly, we haven’t lost our keen fashion sense.

Of course, if a ship was carrying webloggers, there would be only one possible flag…