As I was wandering about the River Walk in San Antonio, I would pass restaurants along the way, glancing down at the happy groups of friends and family as they enjoyed the pleasant weather and each other’s companies. The sight made me feel lonely.

Normally my love of travel would overcome these intermittent feelings of loneliness, but during this trip it seemed more persistent than in previous journeys. I thought about packing it in, heading for the hotel for a Margarita and dinner in my room and a movie on the tube, and started taking some pictures randomly, just to finish the roll.

I had the camera pointed at the river when one of the boats full of happy tourists was going past. I’m used to being ignored when taking photos, so was surprised when the boat driver started waving madly at me, and then called out to his customers, “Hey! Say Hello to the nice lady with the camera!”

I was even more surprised when the riders, obviously primed by an enjoyable ride with this particular guide, one and all starting waving madly at me, calling out hello. People around me stopped to look, most laughing and waving back, and I was startled into a smile, and starting waving with unencumbered hand as hard as I could. It was only when the boat was almost past that I remembered to take some photos, and this was the only one that came out halfway decent. 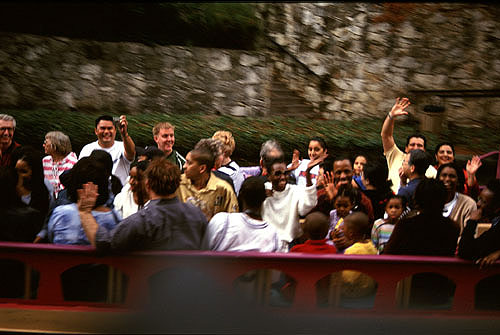 Odd how a simple connection between strangers can change your view of the world. Rather than head back to the hotel I kept exploring until my feet were too sore from unaccustomed walking on cement, and then had a nice dinner at a Mexican food place by the water, chatting with the waitress about the football game coming up the next week.

I look at this photo now, though, in light of the news in recent weeks, and I find myself picking out those in the boat most impacted by the events and decisions.

The older couple to the left, do you see them? There’s a new Medicare bill that will pay for half of their prescription drugs if they have them, but hopefully they don’t, because prescriptions in this country can run into the hundreds of dollars on pills you have to take monthly. Half of costs too much, still costs too much.

Luckily though, they have social security to help them. For the younger people in the boat, like the two young guys next to them, Social Security will most likely be broke by the time they need it, with money diverted to ‘investments’ or eaten away by a huge deficit.

Those kids in the front of the boat, close to me — cute aren’t they? Chances are they have inadequate health care coverage, go to schools that will close in the next few years, and be tested like prime beef and judged solely by the results. Actually, come to think of it, even prime beef isn’t tested as much as these kids.

Most of the smiling folks will suffer some effects of general pollution before they die. Those youngest may never have a chance to walk in undeveloped wilderness when they’re adult.

A few of these people are most likely unemployed and there’s a good chance their jobs are gone, permanently. Others will work longer hours for less money and not say anything because they have families to care for and can’t afford to get fired.

One might die in a war about greed and religion, interchangeable parts. Another might take their own life, in despair.

Where is that boat going so fast, and what will it find when it gets there?

When I look at the people sitting next to each other, and into their faces, and at the smiles, I see something beautiful. Look at the picture again: do you see what I see?