Zoë has a new place to sleep, against a pillow covered in flannel underneath the heat vent in my room. She snuggles in between the wall and the humidifier, under the table which holds my television, stereo, internet router, and various speakers. She’s out of the way but still near me, and warm against the wall. 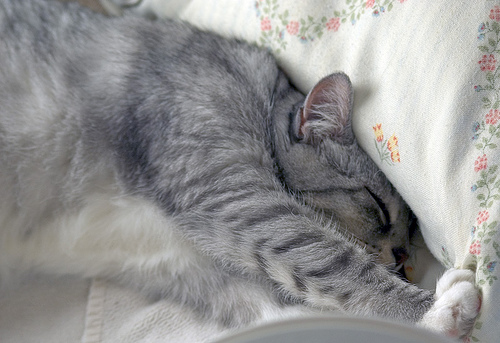 She looked so sweet and trusting that I had to grab the camera and take pictures of her. I woke her up, but she forgave me.

Or did she? Can a cat ‘forgive’? Some people say that animals aren’t capable of sophisticated emotions, such as love or sorrow or, in this case, forgiveness. They believe that what we perceive to be ‘love’ is really an animal’s instinctive deference paid to us as both pack leader and source of shelter, nourishment, and tactile contact.

Can Zoë love me? According to Sarah Hartwell at the MessyBeast site the answer is yes and no:

According to many pet owners, the answer is “yes”. Cats display a range of feelings including pleasure, frustration and affection. Other feline behavior is attributed to jealousy, frustration and even vengefulness. Owners base their answer on observation of feline behavior, but without an understanding of what makes a cat tick, they risk crediting a cat with emotions it does not feel as well as recognizing genuine feline emotions. Owners who veer too far into the “Did my ickle-wickle fluffy-wuffikins miss his mummy then?” approach may not understand (or not want to accept) that a cat’s emotions evolved to suit very different situations to our own.
…
According to many scientists, however, the answer is “no”. They argue that humans like to anthropomorphize (attribute human qualities to non-human animals) and regard pets as surrogate children. We interpret their instinctive behaviors according to our own wide range of emotions. We credit them with feelings they do not have. Some scientists deny that animals, including cats and dogs, are anything more than flesh-and-blood “machines” programmed for survival and reproduction. Others, such as pet behaviorists, credit animals with some degree of emotional response and a limited range of emotions (limited in comparison to humans, that is).

In other words, many scientists believe all animals (including us) share the same set of simple emotions, such as hunger, contentment, and fear. As for the others, what we perceive to be a complex emotion may, in reality, be a combination of simpler emotions or even a survival mechanism.

A cat which clumsily falls off a shelf and acts differently according to whether the owner is watching or whether the owner is believed to be out of sight is thought to be showing embarrassment.. Embarrassment in humans is associated with potential loss of face, loss of status or loss of respect (these are all related, but modified by culture and circumstances). The loss of status may be permanent or temporary.

A cat is not only a predator, it is also prey for larger animals. In addition it is programmed to fight other cats for its territory and for mates. If it shows any indication of weakness, it may be challenged by a younger or fitter rival and ousted from its territory. For this reason, many cats hide signs of illness, injury and pain.

A cat which has fallen off a shelf in plain sight will pretend the event has not happened i.e. that it has not shown any weakness. A human may make excuses for why a similar human mishap happened (the ledge was icy or slippery); this is simply a human way of saving face. Cats speak with their bodies and an “embarrassed” cat will most often sit down and wash nonchalantly – cat speak for “nothing has happened”!

Ah, but I know many people who act in the exact same manner. Oh, they won’t sit on their butt and wash their privates with their tongue, but they will act as if nothing at all is wrong or out of the ordinary when they make a mistake. Most likely for the same reasons as the cat: to not show weakness; to survive. 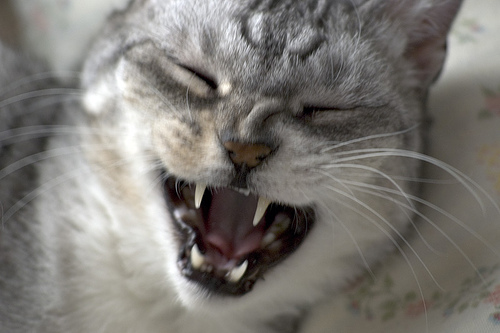 If embarrassment can be explained away as actions necessary for survival, what about a more tender emotion, such as love? We pet owners insist that our pets love us. After all, they greet us with joy when we come home, and they sit and look out the window when we’re gone. They sleep next to us even if the weather is warm, and will follow us outside when it’s bitter cold. Doesn’t this mean they love us? Or again, can this behavior be explained away as a set of simple behaviors?

We can’t specifically ask our pets if they love us, and they can’t let us know by sending us chocolates at Valentine’s day; nor sit in a bar with us until late hours of the night as we cry over some recent hurt. Do we only assume they love us because we love them? Do we need to read love in how they act toward us?

Rather than search for this answer in Hartwell’s general essay on emotions, I searched for the answer in her essay on cats and grief. In this she writes of her own experiences of cat behavior, observed during her animal rescue work:

I have personal experience of a pair of cats whose owner had died. The cats refused to eat while in the shelter. To reduce stress, they were fostered in a household and the vet prescribed appetite stimulants. One cat recovered but remained withdrawn for a long period of time. The other continued to pine and became critically ill until it had to be euthanized (prolonged fasting results in liver damage). Its behavior was so severely affected that the foster carer considered force-feeding unsuitable; the cat had no interest in life …

Cats may express grief through nightmares (quite possibly a dream of the missing person has been replaced by wakefulness and the abrupt realization that the person has gone). One of my rescue cats, Sappho, had repeated nightmares after the traumatic death of the owner in the cat’s presence. Sappho woke up whimpering and fearful from sleep and required physical reassurance from me. If this happened at night, she actually climbed into bed and hid as far down the bed as possible, crying out (initially at a rate of one vocalization per second) until her fear and grief subsided. As well as being clingy, she often woke me from sleep as though afraid that I had also died.

I don’t particularly want to die to test whether Zoë loves me. Does she love me? Of course she does. Look at all the photos I’ve published of her: how could there be any doubt that she loves me? 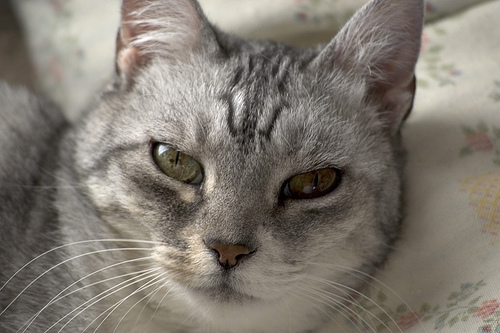 Sometimes, though, when she looks me closely in the face, I can see myself reflected in her eyes. The figure I see there is vague and indistinct, oddly alien. It is a reminder that we are not so very alike, her and I, though we happily share a life together.

In these moments I am aware of the cat within my friend. Aware, and respectful. 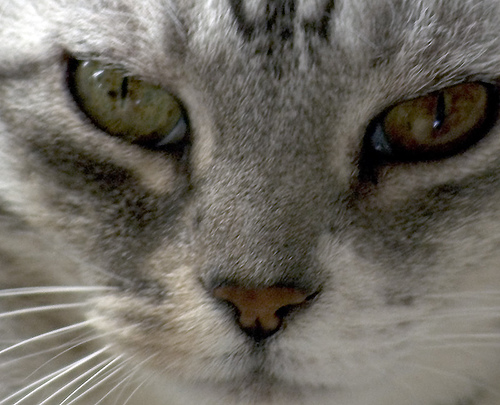