The weather is lovely lately, so much so that I’ve attempted twice to go out and get photos of the wintering bald eagles in our area. Both times I’ve gone to locations some form of Eagle Days was happening, and either I arrived too late or I couldn’t get in because I wasn’t a school kid.

When I went to Chain of Rocks Bridge on Monday, the bridge was closed because of a school program. I decided to visit a park not far from the bridge to see if I could get down to the banks of the Mississippi and walk back to the bridge.

There was a boat launch to the water, and the river was low enough to expose ‘beach’ along the side. However, a beach in Mississippi terms is a relatively flat area of mud of differing thickness, scattered about with various forms of debris (not to mention garbage left by some of those who frequent the area in the nights). I didn’t have my hiking boots but thought I would be able to manage with just my tennis shoes–bringing truth to that old saw that there’s no fool quite like an old fool.

After slipping and sliding along for about 1/2 a mile, I could see the bridge, as well as the rapids, in addition to a rusted out old hulk I’d never noticed before. I passed two fishermen along the way, bundled up against the cold and this sudden incursion of tennis shoe clad tourists, one of whom was hauling an expensive camera to what is the absolute worst neighborhood in St. Louis. Whatever their thoughts, they were locked tight behind stony faces, and eyes fixed on lines in the water.

A family was exploring by the hulk, so I thought if they had no problems getting to the area, I would not either. I then proceeded to step on top of what I thought was firm sand, only to sink into the thickest, muckiest mud you ever did see–sinking up to my ankles and held fast. 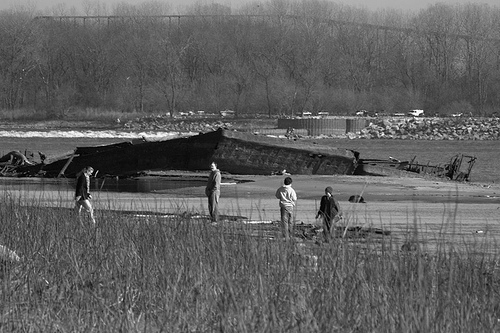 While I was standing there, the family walked past me, up the hill among the scrub, which explains why I didn’t see other footprints along the path I was taking. We called out to each other, chatting about the eagles, and how it was too bad the Bridge was closed. The mother said the kids liked walking along the beach. I said kids would. Too bad we didn’t think to wear hiking boots. Yes, she replied, laughing. I thought of asking them for help pulling me out, but suddenly felt shy of exposing my predicament; feeling a little foolish.

I noticed a bird up above one of the trees and thought at first it was an eagle. I whipped my camera out and took a couple of hasty, blurry shots, but it was only a hawk. Only a hawk–normally getting even a bad photo of a hawk is a good day of shooting.

I also noticed that the mud was full of animal prints, and would have gotten some shots of them and my feet stuck in the mud, but all I had was my 400mm and both were too close. I could have changed lenses, but I thought all that fussing around would probably send my butt into the mud and if my feet were stuck so deep, my god, what would happen to my butt?

I couldn’t see them, but I did wonder if the fishermen down the beach could see me, stuck in the mud. Or did they keep their eyes fixed on their fishing lines?

I think I stood there looking around for close to 20 minutes or so. During that time, I kept moving my feet side to side, trying to break the suction. Finally, with a decided *thwopt*, I could pull out first my left foot, then my right. Still with tennis shoes, though my feet were covered with the thick, persistent brown muck.

On my way home, I noticed people leaving by the Bridge and stopped by the gate to ask if it might be opening. I talked to the guy at the gate and he said as soon as the tents were folded up, they’d be leaving. He looked in and saw all my camera equipment and said whatever I did, to not leave it in the car. Even with guards, they’d had windows smashed in and items grabbed from cars. I mentioned that I leave my extra items in the trunk, and he said make sure I put them in before parking, because the thieves will wait in the bushes (and here he pointed at some bushes by the bridge) to see who puts something valuable in their trunks, and they’ll pry them open as soon as I’m out of sight.

He then looked at me and my 400mm and said whatever I did, make sure others were on the bridge before I walked. While he was talking to me, other cars pulled up to check to see if the bridge was open. It’s a popular place to walk in the neighborhood. There weren’t many parks that close to the river. 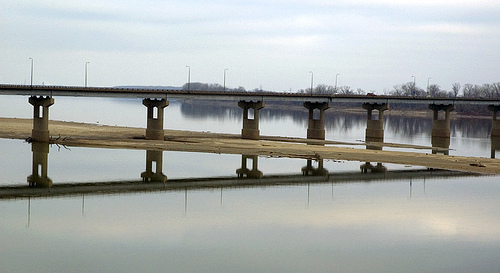 Today, I went down again, this time later in the afternoon, hoping I would catch the eagles. When I pulled into the lot, a large, older black car was driving back and forth between the cars–windows tinted dark. It eventually moved off and I parked, in the center of the lot in a place with no other cars around and easy view from both the road and the bridge.

There weren’t any eagles, but there were doves, seagulls, and heron so I enjoyed the walk and took a few photos. To be safe, I waited until a man walking with his dog and his two kids started heading back to the cars and followed them. When I got to the lot, I noticed, to the side, the large black car I’d seen earlier. It was sitting there, with its engine running, and lights on.

The man and his kids stopped at a SUV a distance from me, and I passed him (still holding that same damn 400mm lens) and hurried to my car. As I approached it, the black car started heading toward me. When I was about 6 feet away from my car, a small, bright yellow SUV pulled into the lot, and then slowed near my car. I signaled the doors unlocked, opened the passenger side, and threw my camera and gear into the car.

The black car turned away, sped up, and pulled out of the lot. The yellow SUV then continued on to park.

When I told my roommate what happened when I got home, he agreed with me that the people in the car were most likely going to try and grab my gear. Chances are the people in the yellow SUV guessed this, too, and stopped near me to keep them away. He also said, and I agreed, I won’t be able to go back to the bridge by myself to go walking again. This hurts, physically hurts, because it’s one of my favorite places to walk. And since I can’t handle the hikes I normally go on at this time, my places to walk are becoming more limited. 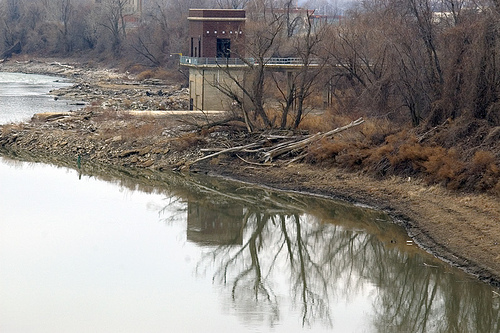 Between one moment and the next, Missouri had stopped feeling like home.

Come down to the banks of Old Man River.

Come down to the banks, and step into the mean muds of the Mississippi.

Sink down until they hold you tight.

Because Old Muddy, he don’t want to let none of you go.

No sir, he don’t want let none of you go.