Today I tackled the ontology sections of the RDF book, which left me feeling a little bit as if ants are crawling up my spine. Time for a little break, and a little weblogging.

I’ve been in an email chit-chat with Clay Shirky about online debates and weblogging. As with others in the past, I’m also trying to entice Clay into starting a weblog so he can be as vulner…accessible as the rest of us. One of the things I talked about in my last email to him is my belief that we’re heading into a new generation of weblog usage, one that will have impacts beyond the border of the traditional blog.

We’re starting to see a little of this already with the concept of LazyWeb. Considering that weblogging brings together both client and technologists, we have unique opportunities to explore new and innovative development approaches.

Someone mentions that they would like technology that does A. I think, wow that’s a great idea and I take a shot at creating a first draft of A. Someone else comes along and they like the concept and the first draft, but they have some improvements in the technology, resulting in A+. A fourth person comes along and says “But wouldn’t it be better if it did this also?” and the whole cycle starts again. Pure de-centralized, distributed, open source, open input development in action. If this isn’t “social software”, I don’t know what is.

And weblogging is maturing in ways other than just technologically. Consider the the first generation of the weblogging, based on discovering what weblogs are and how they work. This is analogous to a child learning what its legs are and how they can be used. Following the early exploration stage, there was the second weblogging generation, much of it based on links and popularity. This is so reminiscent of our teen years, and our desire to fit in, to be popular, that the analogy to human behavior is nothing less than astonishing.

I’m hoping that we’re heading into a third generation of weblogging, young adulthood if you will.

My fondest wish for this next year is to see a diminishment in the novelty of popularity; then we can get down to some serious communication. In 2002 our conversations were too dominated by Google, page hits, page rank, Blogdex, Daypop, and a host of new popularity indicators such as Blogging Ecosystem, Technorati, and Blogstreet. We applaud these technologies because we say they help us discover each other, but I’ve not once discovered another weblogger because of these tools. I usually discover them in the comments, here and elsewhere. And that’s as it should be.

Last year, all throughout weblogging, we had some intense cross-blog and cross-comment conversations, covering topics as diverse as terrorism, the war against Iraq, SFSU protests, technology, and even the recent one on girlism. I found these multi-threaded, engaged discussions to be far more exciting than the fact that hundreds or even thousands of faceless people have trooped through my pages. Yet most of these fascinating discussions — many stretching across dozens or even hundreds of weblogs in some form or another — barely made a blip on either Daypop or Blogdex.

Seriously, our value system is as wrongfully skewed to ‘hits’ as Google is. 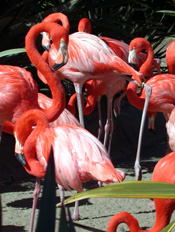 I started the Threadneedle project to capture this cross-conversation capability. In its first incarnation I discovered that my original concept was infeasible because of the space requirements and the forced centralization. Now, with trackback and increasing uses of other technologies, we’re starting to see ‘threadneedle’ take form, and we’re finding that what was wrong with my original concept is that it was based on one technology — threadneedle is not one single technology, it’s dozens created by as many or more people, all focusing in one way or another on Conversation — not hits.

How would you like to have a conversation with a thousand people all throughout the world? How long will it take a question to be answered when posed to 10,000 people? What kind of events can be influenced when you can collect 100,000 into one single voice?

Now, I ask you, how can anyone possibly resist all of this?