Paper wasps are quite common here in Missouri. Unlike other types of wasps, they’re not very aggressive, except around their nests. If you threaten a wasp’s nest, or agitate them in some way, they can sting and like other wasps, they can string repeatedly. Their stings are very painful (3 on the Schmidt Sting Pain index, or “Like spilling a beaker of Hydrochloric acid on a paper cut”), and if you’re allergic to stings, as I am, can be quite serious.

When the paper wasp started buzzing around behind the screens up in the corner of the french doors out to the deck, we didn’t think much of it. It wasn’t until we saw her starting her nest that we knew we had to get rid of it and quick. You can’t have a paper wasp nest next to a door; not if you want to use the door.

However, you can’t knock the nest down when they’re building it. The old, “Busy as a bee. Angry as a wasp” thing. The day before yesterday, when she took off to get more material, I quickly went out with the broom and knocked the nest down and as quickly ran back inside, shutting the door behind me. She returned with the material, long gray streamer behind her, and buzzed all over looking for the nest. For over an hour she flew around in front of the door and around the corner. Eventually she landed, and sat for a couple of hours where her nest was. When she made motions of starting to re-build, I pounded on the door to disturb her and eventually she took off.

Yesterday, she returned to the same corner and again, and sat there for a couple of hours. With today’s storm, she hasn’t been back.

When she was building her nest, I did grab a couple of careful photos using my telephoto lens. It wasn’t until I processed the photo today that I noticed her nest had one tiny egg in it. 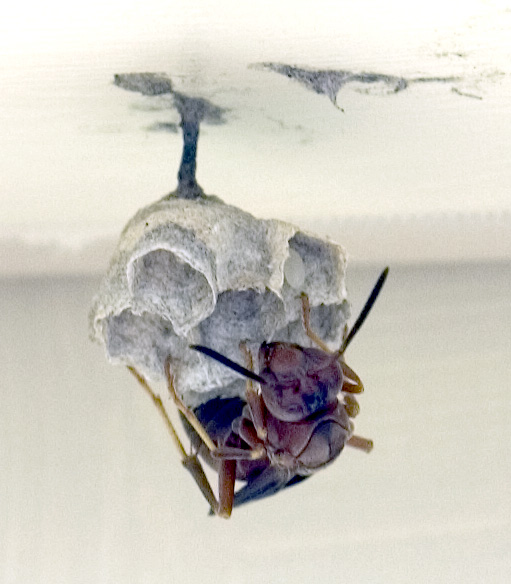