Trip was only a few days so decided to squish into a weblog posting. .

I took Interstate 8 from San Diego to Arizona, and stopped at a rest area outside El Centro while still in California. As I got out of the car, I heard this jet sound. Looking up, I saw four jets in close formation directly overhead — the rest area was right next to the base where the Blue Angels practice their show. So I grabbed my water and my crackers and cheese and watched the entire show from the best seats a person could have. Serendipity.

I stayed my first night outside Flagstaff, and the next day went hiking around the Cathedral rocks in the Red Rock country in Sedona. If you’ve ever been in Sedona, you know how incredibly beautiful the countryside is. I took several photos but they don’t even capture the “rightness” of this area. Rust red rocks, dark green scrub, and blue skies, though the sky that day was overcast.

There wasn’t anyone at the park when I got there, which just blew me away. I walked along the stream when I came upon this field of piled rocks. People who visited would take river stones and pile them just as the rock artists in San Francisco. A novel way of marking your visit, without any harm to the area. Eventually the weather and critters will knock the little pyramids down and the stones become fodder for the next artist. Can you see my little pyramid in the photos? Free trip to Arizona for anyone that spots the correct one — one guess to a customer.

On the way back I decided to detour through the Navajo Indian Nation. I thought I could take Highway 160 to 64 and make Santa Fe by evening. What a lousy judge of distance I am.

The Navajo Indian Nation is probably the most inspiring land I’ve seen. It changes constantly from desert to plains to cliffs to hills to rocks to farms. You can’t get bored, but you can get overwhelmed. On thing I had read is that you don’t want to be on the Reservation at night because livestock and wild animals are frequently on the road and it can be very dangerous.

As the afternoon wore on and I saw no end in sight of Arizona, much less getting close to Santa Fe, I started inching my speed up on the car. Well, that was a mistake. The Navajo police are meticulous about the letter of the law. Sure enough, here come the lights. Driver’s license less than 8 months and I get a speeding ticket.

The officer was very nice and asked me the usual, including did I know I was going 71 in a 65 MPH zone. I answered truthfully, that yes, I knew it but I had badly misjudged the length of time to cross the reservation and was concerned about being on the road at night. He checked me out, and maybe because I was honest, and probably because he was a very decent person, he just gave me a warning — saving me I don’t know how much money in insurance rates.

He also told me I would be out of the Res in about an hour, but still in the back country.

At that point I checked the map and decided to cut directly down to the freeway on another road. I started out at dusk and drove for much longer than expected. I’m almost out of gas, it’s dark, the highway isn’t that well traveled and I haven’t seen a sign about what highway I’m on, and when I’ll hit something. Well, something friendly.

I did NOT want to run out of gas in the back country. Sure, I’d be safe enough, though cold. Still — I’m a coward, and I have a real thing about being out in the country all by my lonesome without any preparation, late at night.

Luckily, cars became more frequent, I found a gas station, I got gas, I got on the freeway.

Point to make — having an adventure because you plan it, or deliberately grabbing an opportunity is great; having one happen because you keep making stupid mistakes is a completely different thing.

Next day, I was tired and wanted to just get to my friend’s in St. Louis. I drove through the rest of New Mexico, Texas, most of Oklahoma, and most of Missouri. I drove 18 hours with little break.

Crossing Missouri was a nightmare. It was night, I was exhausted, and there were so many semi-trucks out that I thought I had stumbled on to a trucker’s convention. I spent three solid hours playing dodge car with trucks that could make a smear out of Golden Girl. Worse, I was having real problems seeing at night. In fact, I found that my night vision for driving was extremely poor — is this normal?

By the time I got to St. Louis, I was so tired that I was driving 45 MPH in a 65MPH zone, weaving all over the road. At one point, I was actually confused about the lines on the road and the exit I was to take. Once off the freeway, I had to call my friend on my cell and have him give me step by step instructions to get to his place.

That’s the stupidest thing I’ve ever done! I will never ever drive that long again, and to that point of exhaustion. I could have killed myself or worse, someone else! And playing games with semi-trucks? Rocks for brains.

All in all, though, I had an enlightening first long distance trip. And I’m already planning my next visit to Arizona — where I will obey the traffic signals to a letter, as well as stay for much longer than a few days.

Still preparing photos and road trip report. One thing about being on modem is you become more aware of download times — and I need to add size information to my photos to make sure my text loads first before the photos are finished. Not using size information with your photos and using tables for layout design (I know, evil Bird), slows any of the content from showing until enough information is generated about the photos to start the table layout.

That and too many posts on the main page is why you see orange for what seems a long time.

(Still, the orange is kind of a warning…ware, here be birds that burn.)

I used a new low-tech version of wireless weblogging the last few days. It’s called “paper” and you use a “pen” to upload the information. Remarkable what people come up with, isn’t it? I found the process to be very satisfying and plan on continuing the use of this new technology.

Tidbits from the Journal:

Do you have an ice scrapper? No, I have patience and no particular place to go. If there’s frost on the windshield in the morning, the car and I’ll just sit in the sun until we’re both ready to go.

There’s something peaceful and seductive about the Arizona desert. The blue of the sky, the rust of the hills, scrub brush and hearty cacti, 18-wheelers air braking in the distance.

I’m like Tom Hanks in Castaway, standing at the cross roads wondering which way to take. This way opens up canyons and vistas; that way gets me closer to a working internet connection. Decisions, decisions. Today, the decision is canyons.

“May I see your driver’s license and registration, please.”

“Ma’am, are you aware of the speed limit here on the reservation?”

Three days and close to 1800 miles later, I’m in St. Louis — after an 18 hour drive from an hour west of Albuquerque. I spent the first two days wondering Arizona back roads and the Navajo Nation. Good things and bad. And definitely lessons filed under “I’ll never do that again.”

I don’t think a vacation is truly complete if you don’t have at least one incidence of “I’ll never do that again”, do you?

Trip photos, including Cathedral Rocks, getting lost in the desert, and top it off with the Blue Angels. 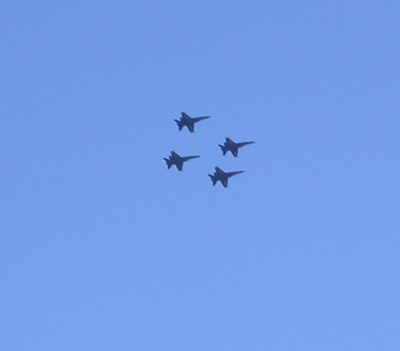 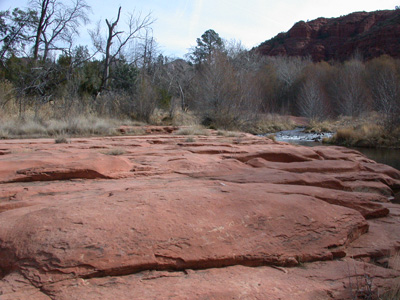 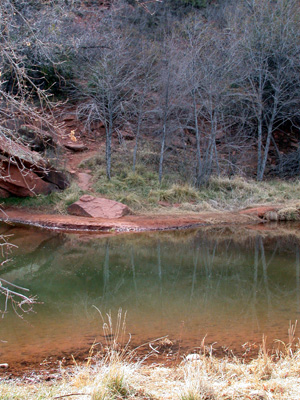 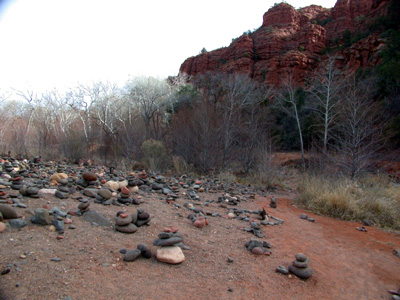 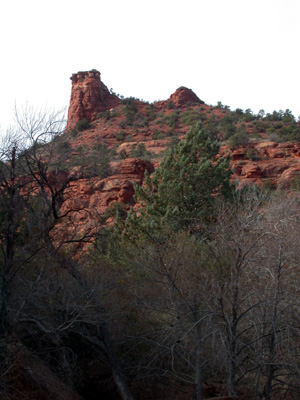 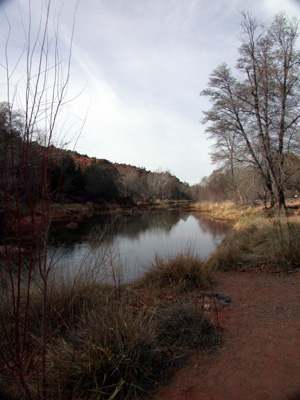 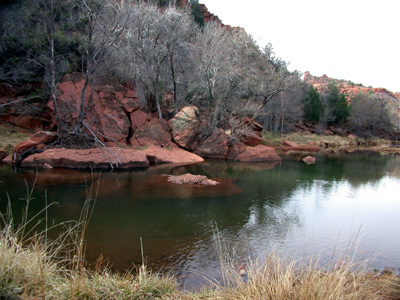 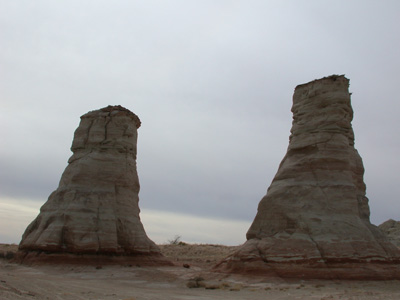 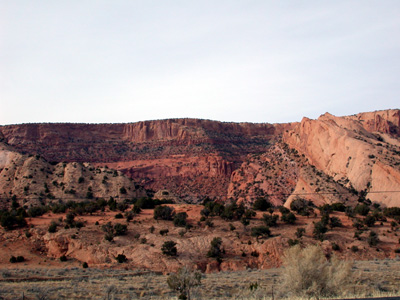 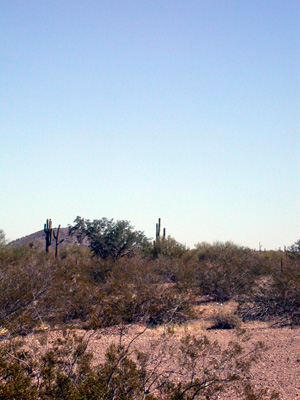 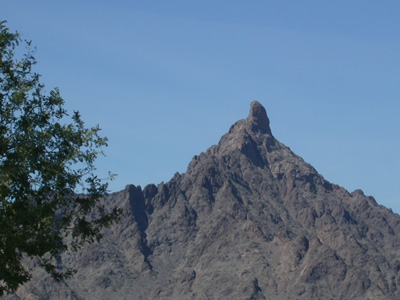 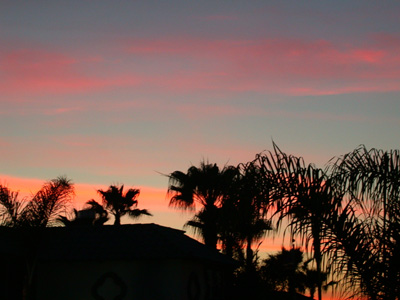