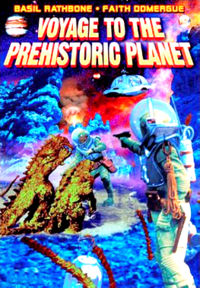 I watched Voyage to the Prehistoric Planet and it took three starts before I discovered that it and Voyage to the Planet of Prehistoric Women shared much of the same footage and I wasn’t clicking the wrong movie on the disc. Both movies are a rather amazing blend of barely related scenes added together into one not so cohesive whole.

According to Scifilm, the original movie was Planeta Burg (Planet of Storms) produced by the Leningrad Studio of Popular Science Films. It was then bought by the infamous Roger Corman, grandfather of B sci-fi flicks, and hacked as background footage to be combined with two more familiar faces: Basil Rathbone as lead scientists back on the moon, and Faith Domergue from the more acclaimed science fiction class, It Came from Beneath the Sea.

The story is about three rocket ships traveling to Venus for exploration, when one is blown up by an asteroid. This figures little in the movie and the only reason I’m assuming they added this to the story was to heighten the dangers of space exploration (and be able to add a ‘ship blowing up in space’ scene, which looks in the trailers). The other two ships decided to move on to Venus: one holding two men and a robot named John; the other carrying three men.

The ship with John crash lands and the second ship sets down to look for and rescue their comrades. The movie then segues between both groups as they encounter all sorts of Venusian wildlife, interspersed with shots of Basil on the moon, and Faith, in some form of Venusian orbiter.

What follows is classified as bad to very bad, but I found it to be rather fascinating and even a little endearing. The ‘dangerous animals’ were so funny that I stopped the movie a couple of times to go back over their scenes. However, all of these were shot against a backdrop that was both stunning and surreal–made more so by the juxtoposition between the very good and the very bad. The film deserves more respect than it has been given, if only for the stage settings and scenes of the planet.

Returning to the characters, our first exposure to John the Robot is when he’s ‘awakened’ in ship one, by an actor who can’t quite decide if he’s in a science fiction film or one of the old horror pictures. Waken, John he murmers in sepulcher tones again and again, as the camera moves in on his intense and slightly demonic stare. John wakens, and though he is shown whole when on the ship, he’s shown without his head when the crew first lands. 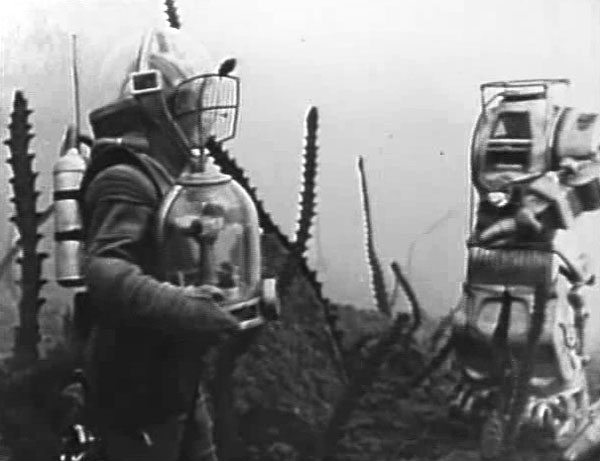 One advantage of having John headless at first is it does allow the two astronauts to be attacked by men dressed as dinosaurs who hop around like kids in a potato sack race at a picnic. I will say no more, because these creatures antics must be seen to be fully appreciated.

The other crew has a young man in it, Andre, who defies authority with brainless frequency, usually getting himself entangled in situations without any dire threat. This crew hears the haunting siren call that Andre believes to be a woman (and a beautiful woman at that), and he wants to go off searching for this damsel, but is restrained by older, wiser heads.

Andre’s actions and the others of the second crew are those that demonstrate this to be a Russian movie, rather than American. One crew member continually reacts with pessimissm to any event, and all three act as if authority is to be give lip service, and then ignored. They are minimalistic heros, and refreshing for all of the bigger than life antics of their western compatriots.

The second crew also meets most of the wild life on the planet including big but unscary dinosaurs, man eating plants, and the oddest underwater octopus you’ve ever seen. I want one as a pet.

I don’t want to give an impression that this is kiddy fare. There is suspense in this film, and a hint of danger. It doesn’t, however, come from the man eating plant, the hopping dinosaur men, or the brontosaurus. 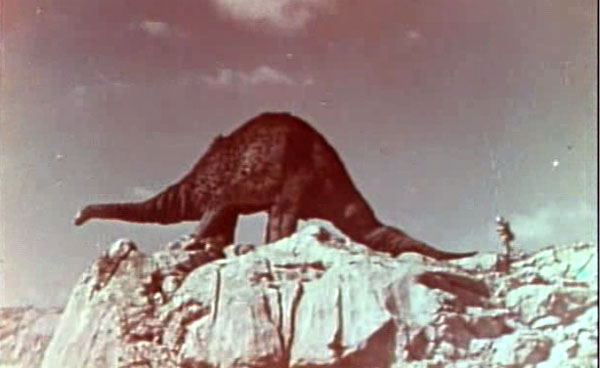 Nor the flying pterodactyl or the octopus underwater. 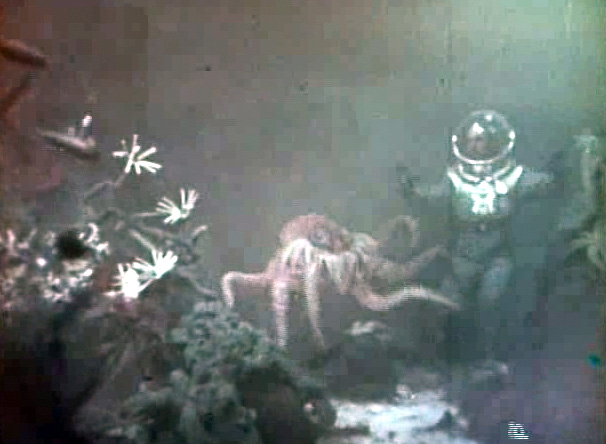 No, it comes from Marsha, the single female in the show, left in the orbiting platform and who served as conduit between the command center on the moon and the men on the planet. When she’s cut off without communication with either party she’s forced to consider making a decision on her own; potentially committing, the planet commander solemnly tells the other men, the worst mistake made by any of them. 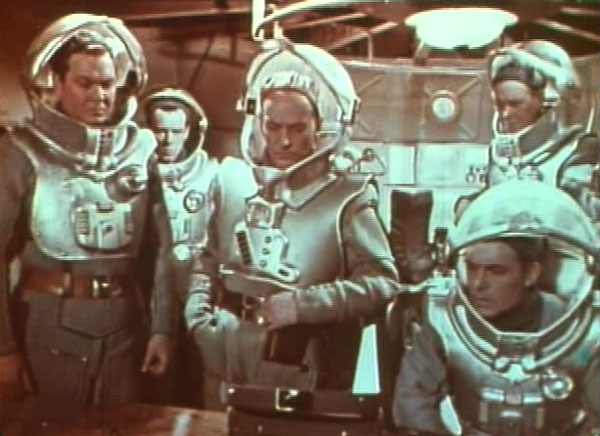 Thankfully though, she connects with the lunar base before moving beyond her role of black haired buxom beauty without a brain, and the crew is spared such horror.

Which is as good a time to introduce Voyage to the Planet of Prehistoric Women, as any. 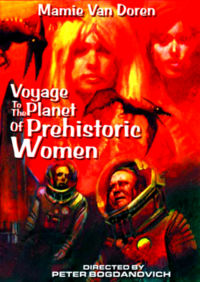 In Voyage to the Planet of Prehistoric Women the story line is exactly the same, but this time we see the women of Venus. They are primitive (but beautiful) and superstitious and they invoke the gods of their planet to send the volcano’s molten lava and rains that threaten the crew throughout both movies. There’s never any interaction between the two because the second movie’s scenes with the women were knitted into the original movie, which is itself, knitted together from Russian film and American parts.

What might surprise you when you see this film, and especially the scenes with the women, is to realize that the new bits were directed by none other than Peter Bogdanovich in what is probably his first solo directing debute (and one that I’m sure he’d like to forget). Yes, the man who did The Sopranos originally did babes on Venus. 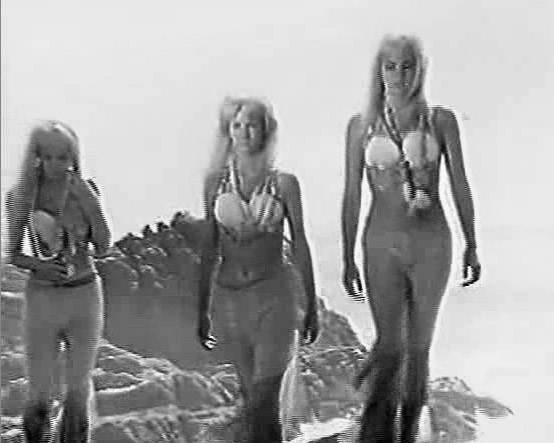 Why the second film? Because science fiction and sex were big in Hollywood at the time, and the original movie didn’t feature any women, and adding one women (and dark haired at that) was deemed not quite enough–not to mention that she didn’t really show much skin. Besides, what better opportunity to feature blonde beauties in tight, torn pants, wearning bras made of clam shells? This must have been standard ‘women from another planet’ garb at the time, because the women resembled many of the alien women in the original Star Trek shows. 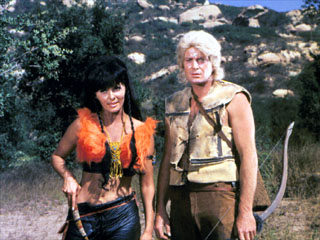 There’s also an interesting bit at the end of the movie that differed from the original, but I wouldn’t want to spoil your fun.

You can get both movies via Internet Archive (and here) and Bittorrent (and here).

These are classic ‘bad’ science fiction, with acting that’s either wooden or overly dramatic, and special effect monsters that will make you giggle and guffaw. The quality ranges from blurry to scratchy, with either no color or bad color. However, the shows are worth watching for three reasons:

The first is that the very nature of the piecemeal effort on these movies is rather interesting to watch, with its very Russian components intermixed with the very American additions. Considering this all was done during the coldest of the Cold war, it makes for an intellectual exercise viewing the Soviet propaganda as compared to Hollywood marketing.

The second reason is the film’s monsters are wonderfully delightful. None are menacing, all are funny, and how could you resist that octopus? I would have liked to seen the original Russian film, as I have a feeling much of the ‘suspense’ (as well as other ‘monster’ scenes) was hacked out to make way for the Basil/Faith moments.

The last reason is the backdrops and some of the better directed and constructed scenes. Seriously in a movie with better (or no) monsters, not to mention acting–without the American hacks–this movie could easily win awards for the background and some of the stand alone scenes.

You could easily forgo the second movie with the addition of the ladies, but why deny yourself the treat? Go for both.