Time was slipping by to catch the wintering eagles. I haven’t spotted a one on any trip, and the season will be ending in a few weeks. Today, then, I headed to the Lock & Dam 24 in Clarksville at sunrise–supposedly one of the most popular eagle fishing areas.

Clarksville is a very charming little town located directly on the Mississippi. It’s celebrating its Eagle Days this weekend, but today I was the only person looking for the birds in the viewing stand built above the locks. It was a beautiful day: sunny and clear skies and the Mississippi looked deep sapphire blue located just above the confluence of both the Ohio and Missouri. But cold! The winds were so cold and dry, and my eyes teared up so much, when I got back into the car, I had rings of salt around them–something that’s never happened before.

There were flocks of seagulls and other birds, but no eagles. 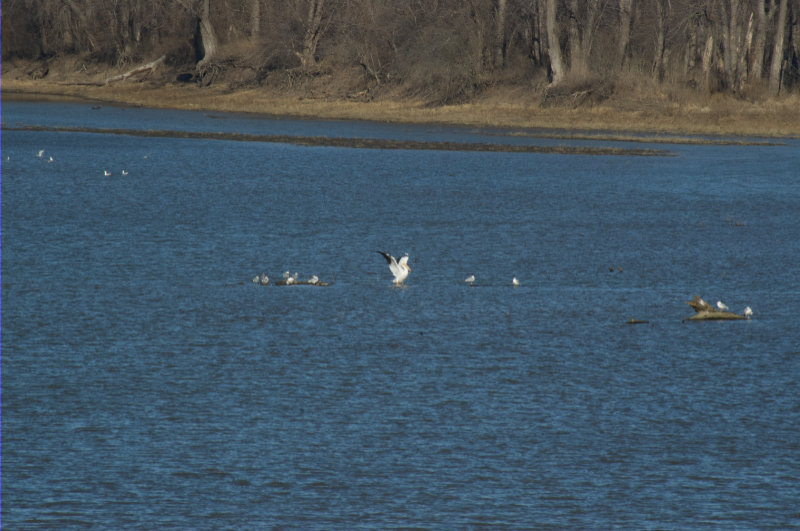 I was disappointed, but the rest of the view was so nice that the trip was more than worthwhile. I love funky small town, and Clarksville is that. It’s not very big, but many of the buildings have all the gingerbread of their Victorian beginnings, and there’s plenty of places to explore. 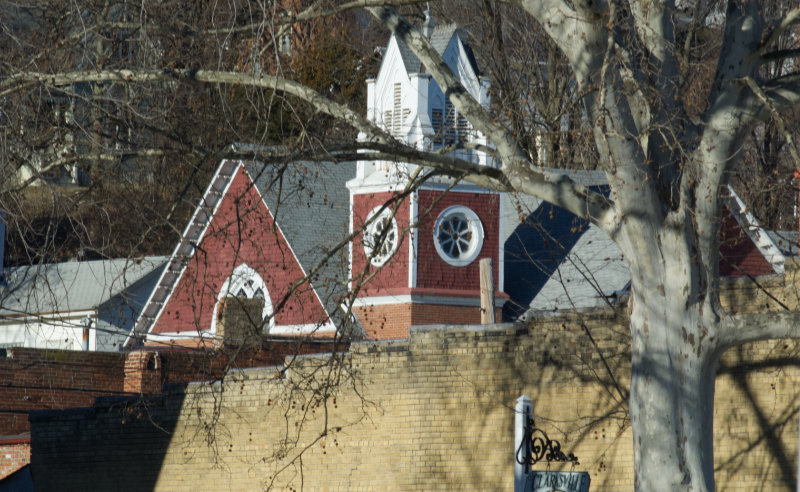 Still, I was after eagles, so I stopped by at the Lock & Dam 25 near Winfield, on the way home.

This Lock & Dam has a park near it, and a slough that parallels the Mississippi river, but the actual locks themselves are behind barbed wire and fairly stringent security. 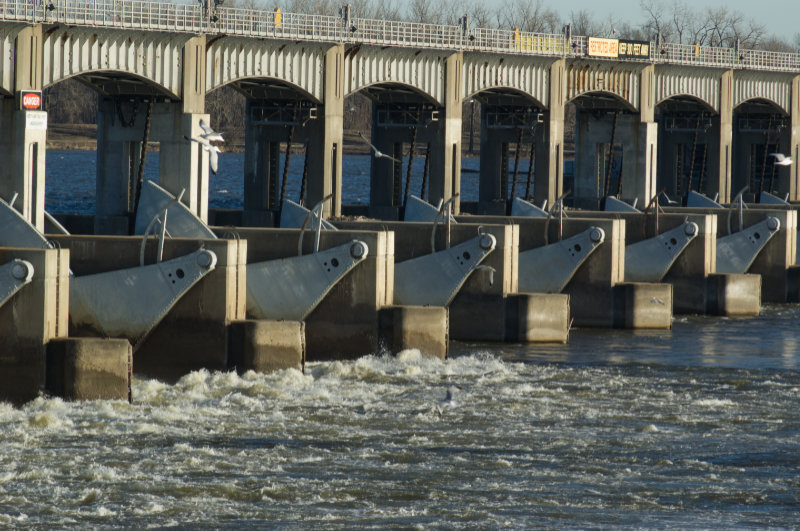 I couldn’t see any eagles at first, though I did see white pelicans, the ubiquitous seagulls, and other birds. Finally, after walking around about an hour, off in the distance, I saw one eagle. One, and too far to photograph.

And cold! It was so bloody cold! As nice as it was to be by the river, I was becoming numb. I was getting ready to leave when I noticed a man standing by the bridge over the slough, camera pointed to the trees near my car. I hadn’t even noticed–the eagles were in the trees. 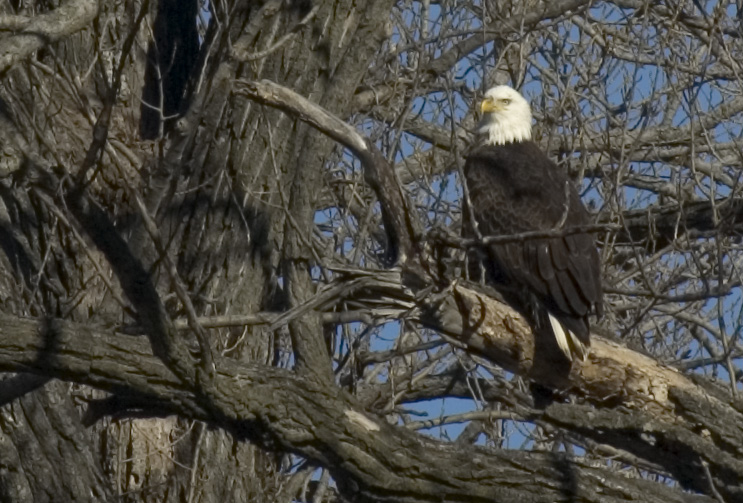 There were six adults and one juvenile. They would take off every once in while, circle about and fish, though I didn’t manage a photo of any of the birds catching a fish. Actually, I didn’t have a chance to get any really great photos of the eagles. I’m not used to bird photography, and my inexpensive 400mm doesn’t take the best of photos. Add this to the bright light of midday and fast moving birds, and an elegant blur is the most one can hope. 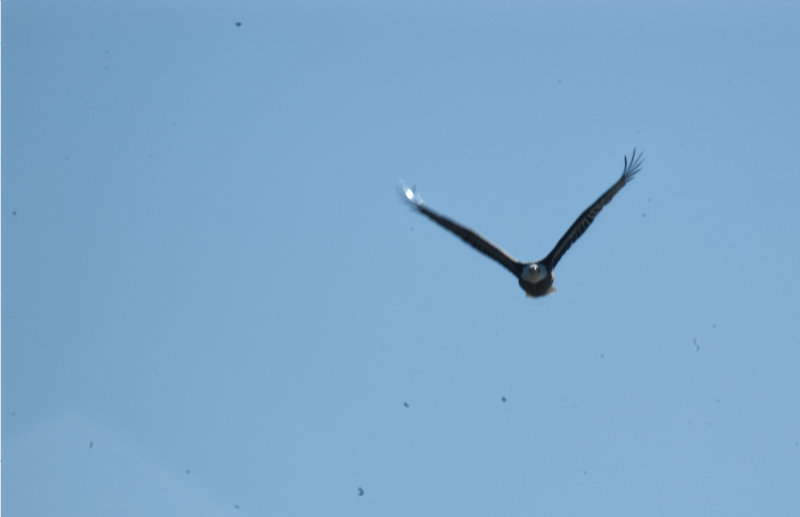 I am inspired, though, to get better at bird photography, including buying a better 400mm lens someday–maybe even a 600mm (yeah, dream on).

I had a wonderful time taking pictures of the birds. Especially when one headed straight over me, with me frantically trying to adjust the exposure, focus, and take pictures. The following is my favorite of the eagles, even though it’s not that sharp. To me, it shows the essence of eagle. I call it, “I am the fish”. 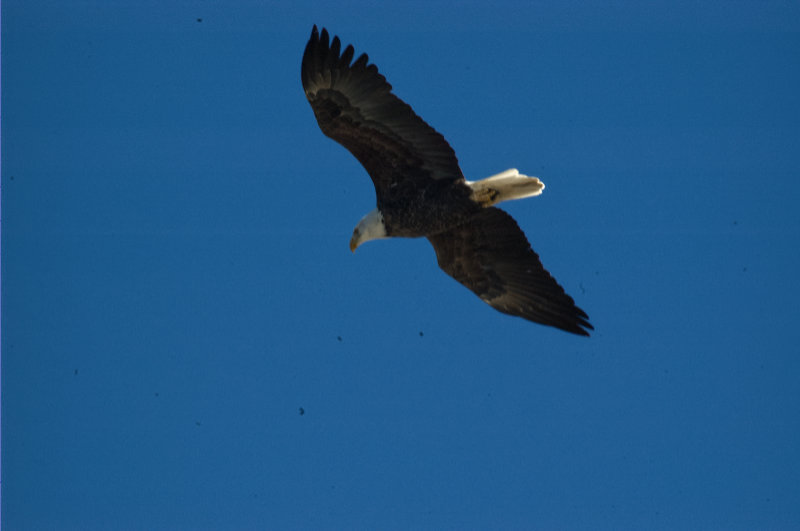 My three favorite photos from the day were not of eagles, though. I like the one I took of the VFW Hall in Clarksville. I am thinking of starting a collection of photos of VFW halls in the various places I visit, because each represents the community in some way. They are the true Americana of America. The day the VFW halls disappear is the day when our country will have lost much of its heritage. 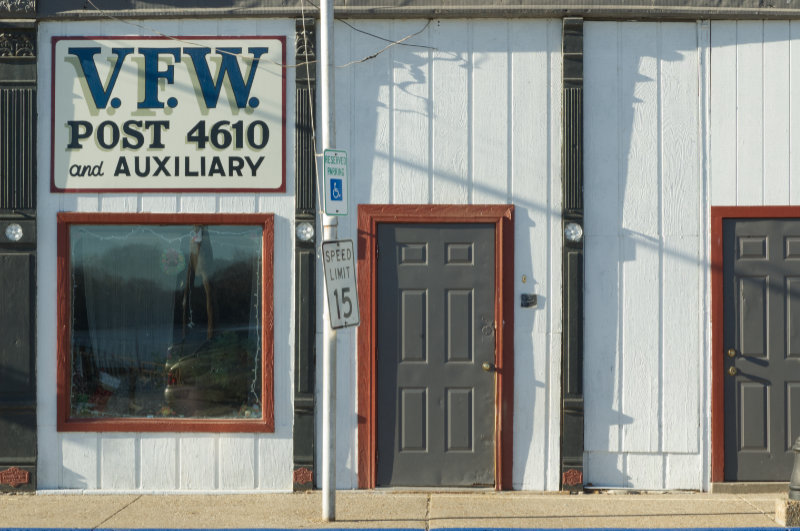 I also liked two photos I took of seagulls. One was at Clarksville, and features a boat full of fishermen in front of a flock of gulls taking off. 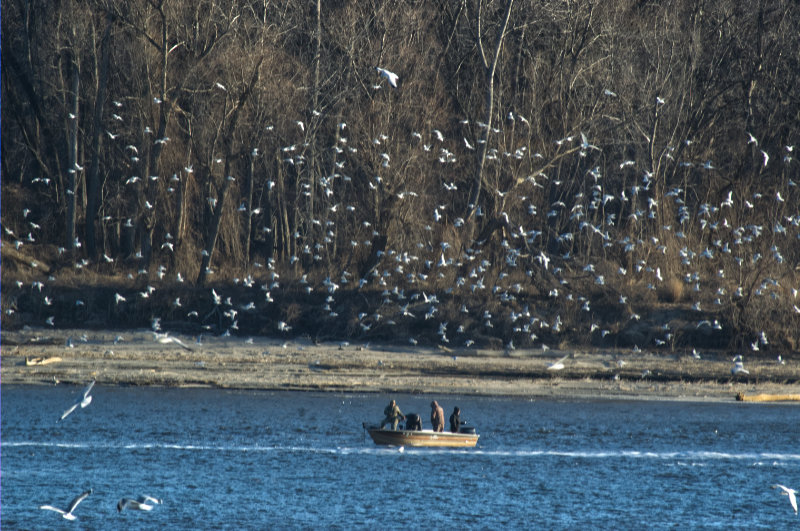 The second was at Winfield, and again showed a flock of gulls taking off–backed by a dark and tangled wood. If the eagle represents pride, nothing represents joy of flight more than seagulls. 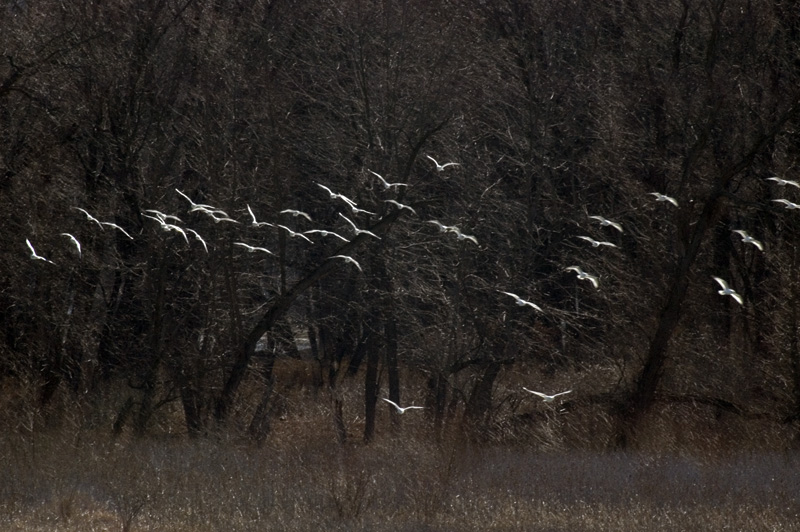