Being a Beatles fan, I must admit to being intrigued about the new Beatles box set that will be available in September. I have several Beatles albums, but not all. None of the CDs I own have been re-mastered or re-mixed, including one of my favorite songs, from Abby Road: Maxwell’s Silver Hammer:

I love the chorus, Bang! Bang! Maxwell’s silver hammer came down upon her head…

Speaking of Bang! Bang! Jeni Tennison returned from vacation, surveyed the ongoing, and seemingly unending, discussion on RDFa as compared to HTML5’s Microdata, and wrote HTML5/RDFa Arguments. It’s a well-written look at some of the issues, primarily from the viewpoint of a heavy RDFa user, working to understand the perspective of an HTML5 advocate.

Jeni lists all of the pushback against RDFa that I’m aware of, including the reluctance to use namespacing, because of copy and paste issues, as well as the use of prefixes, such as FOAF, rather than just spelling out the FOAF URI. Jeni also mentions the issue of namespaces being handled differently in the DOM (Document Object Model) when the document is served as HTML, rather than XHTML.

The whole namespace issue goes beyond just RDFa, and touches on the broader issue of distributed extensibility, which will, in my opinion, probably push back the Last Call date for HTML5. It may seem like accessibility issues are the real kicker, but that’s primarily because no one wants to look at the elephant in the corner that is extensibility. Right now, Microsoft is tasked to provide a proposal for this issue—yes, you read that right, Microsoft. When that happens, an interesting discussion will ensue. And unlike other issues, whatever happens will take more than a few hours to integrate into HTML5.

I digress, though. At the end of her writing, Jeni summarizes her opinion of the RDFa/namespace/HtmL5/Microdata situation with the following:

Really I’m just trying to draw attention to the fact that the HTML5 community has very reasonable concerns about things much more fundamental than using prefix bindings. After redrafting this concluding section many times, the things that I want to say are:

My own opinion is that I don’t care that RDFa is not integrated into HTML5. In fact, I don’t think RDFa belongs in HTML5. I think a separate document detailing how to integrate RDFa into HTML5, as happened with XHTML, is the better approach.

The problem with the Microdata section is that it is a competing semantic web approach to RDFa. Unlike competition in the marketplace, competition in standards will actually slow down adoption of the standards, as people take a sit-back and see what happens, approach. Now, when we’re finally are seeing RDFa incorporated into Google, into a large CMS like Drupal 7, and other uses, now is not the time to send a message to people that “Oops, the W3C really doesn’t know what the fuck it wants. Better wait until it gets its act together. ” Because that is the message being sent.

“RDFa and Microdata” is not the same as “RDFa and Microformats”. RDFa, or I should say, RDF, has co-existed peacefully with microformats for years because the two are really complementary, not competitive, specifications. Both can be used at a site. Because Microformat development is centralized, it will never have the extensibility that RDF/RDFa provides, and the number of vocabularies will always, by necessity, be limited. Microformats, on the other hand, are easier to use than RDFa, though parsing Microdata is another thing. They both have their strengths and weaknesses. Regardless, there’s no harm to using both, and no confusion, either. Microformats are managed by one organization, RDFa by the W3C.

Microdata, though, is meant to be used in place of RDFa. But Microdata is not implemented in any production capable tool, has not been thoroughly checked out or tested, has not had any real-world implementation that I know of, has no support from any browser or vendor, and isn’t even particularly liked by the HTML WG membership, including the author. It provides only a subset of the functionality that RDFa provides, and necessitates the introduction of several predefined vocabularies, all of which could, and most likely will, end up out of sync with the organizations responsible for the extra-HTML5 vocabulary specification. And let’s not forget that Microdata makes use of the reversed DNS identifier that sprang up, like a plague of locusts, in HTML5, based on the seeming assumption that people will find the following:

Easier to understand and use then the following:

Which, heaven knows, is not something any of us are familiar with these last 15-20 years.

RDFa and HTML5/Microdata, otherwise known as Issue 76 in the HTML 5 Tracker database. I understand where Jeni is coming from when she writes about finding a common ground. Finding common ground, though, presupposes that all participants come to the party on equal footing. That both sides will need to listen, to compromise, to give a little, to get a little. This doesn’t exist with the HTML5 effort.

Where the RDFa in XHTML specification was a group effort, Microdata is the product of one person’s imagination. One single person. However, that one single person has complete authorship control over the HTML 5 document, and so what he wants is what gets added: not what reflects common usage, not what reflects the W3C guidelines, and certainly not what exists in the world, today.

While this uneven footing exists, I can’t see how we can find common ground. So then we look at Jeni’s next set of suggestions, which basically boil down to: because of the HTML WG charter, nothing is going to happen with HTML5, so perhaps we should stop beating our heads against the wall, and focus, instead, on just using RDFa, and to hell with HTML5 and microdata.

I am very close to this. I had started my book on the issues I have with HTML5, and how I would change the specification, but after a while, a person gets tired of being shut out or shut down. I’m less interested in continuing to “bang my head against the wall”, as Jeni so eloquently put it.

But then I get an email this week, addressed to several folks, asking about the introduction of Microdata: so what does the W3C recommend, then? What should people use? Where should they focus their time?

Confusion. Confusion because the HTML5 specification is being drafted specifically to counter several initiatives that the W3C has been nurturing over the last decade: Microdata over RDF/RDFa; HTML over XHTML; Reverse DNS identifiers over namespaces, and URIs; the elimination of non-visual cues, not only for metadata, but also for the visually challenged. And respect. There is no respect for the W3C among many in the HTML Working Group. And I know I lose more respect for the organization the closer we get to HTML5 Last Call.

In fact, HTML Working Group is a bit of a misnomer. We don’t have HTML anymore, we have a Web OS.

We don’t have a simple HTML document, we have a document that contains the DOM, garbage collection, the Canvas object and a 2D API, a definition for web browser objects, interactive elements, drag and drop, cross-document communication, channel messaging, Microdata, several pre-defined vocabularies, probably more JavaScript than the ECMAScript standard, and before they were split off, client-side SQL, web worker threads, and storage. I’m sure there’s a partridge in a pear tree somewhere in there, but I still haven’t made it completely through the document. It’s probably in Section 10. I know there’s talk of extending to the document to include a 3D API, and who knows what else.

There’s a lot of stuff in HTML5. What isn’t in the HTML5 document is a clean, straightforward description of the HTML or XHTML syntax, and a clearly defined path for people to move to HTML5 from other specifications, as well as a way of being able to cleanly extend the specification—something that has been the cornerstone of both HTML and XHTML in the past. There’s no room for the syntax, in HTML5. It got shoved down by Microdata and the 2D API. There’s no room for the past, the old concepts of deprecated and obsolete have been replaced by such clear terms as “Conforming but obsolete”. And there’s certainly no room for future extensibility. After all, there’s always HTML6, and HTML7, …, HTMLN—all based on the same open, encompassing attitude that has guided HTML5 to where it is today.

If we don’t like what we see, we do have options. We can create our own HTML5 documents, and submit “spec text” for a vote. But what if it’s the whole document that needs work? That many of the pieces are good, but don’t belong in the parent document, or even in the HTML WG?

The DOM should be split out into its own section and should take all of the DOM/interactive, and browser object stuff with it. The document should be re-focused on HTML, without this mash-up of HTML syntax, scripting references, and API calls that exists now. The XHTML section should be fleshed out and separated out into its own section, too, if no other reason to perhaps reassure people that no, XHTML is not going away. We should also be reminded that XHTML is not just for browsers—in fact, the eBook industry is dependent on XHTML. And it doesn’t need Canvas, browser objects, or drag and drop.

Canvas should also be split out, to a completely separate group whose interest is graphics, not markup. As for Microdata, at this point, I don’t care if Microdata is continued or not, but it has no place in HTML5. If it’s good, split it out, and let it prove itself against RDFa, directly.

The document needs cleaning up. There are dangling and orphaned references to objects from Web Workers and Storage still littering the specification. It hops around between HTML syntax and API call, with nothing providing any clarity as to the rhyme or reason for such jumping about. Sure there’s a lot of good stuff in the document, but it needs organization, clean up, and a good healthy dose of fresh air, and even a fresher perspective.

Accessibility shouldn’t be added begrudgingly, woodenly, resentfully. It should be integrated into the HTML, not just pasted on in order to quiet folks because LC is coming up.

The concepts of deprecated and obsolete should be returned, to ensure a sense of continuity with HTML 4. And no, these did not originate with HTML. In fact, the use of deprecated and obsolete have been fairly common with many different technologies. I can guarantee nothing but the HTML5 document has a term like “conforming but obsolete”. I know, I searched high and low in Google for it.

And we need extensibility, and no, I don’t mean Microdata and reverse DNS identifiers. If extensibility was part of the system, folks who want to use RDFa could use RDFa, and not have to beg, hat in hand, to be allowed to sit at the HTML 5 table. This endless debate wouldn’t be happening, and everyone could win. Extensibility is good that way. Extensibility has brought us RDFa, SVG, MathML, and, in past specifications, will continue to bring whatever the future may bring.

whatever the future may bring…

I asked Wolfram Alpha: what is RDF? 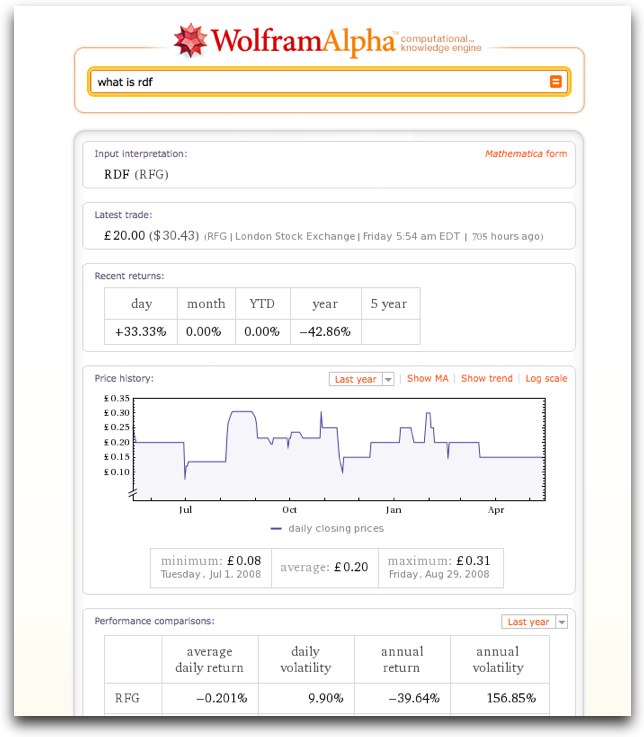 I would have been more impressed by Wolfram Alpha if at the end of its interpretation of my request, it asked me, “Was this answer correct? Was this answer complete? If not correct or complete, what do you consider RDF to be?”

I then asked the same question of Google. 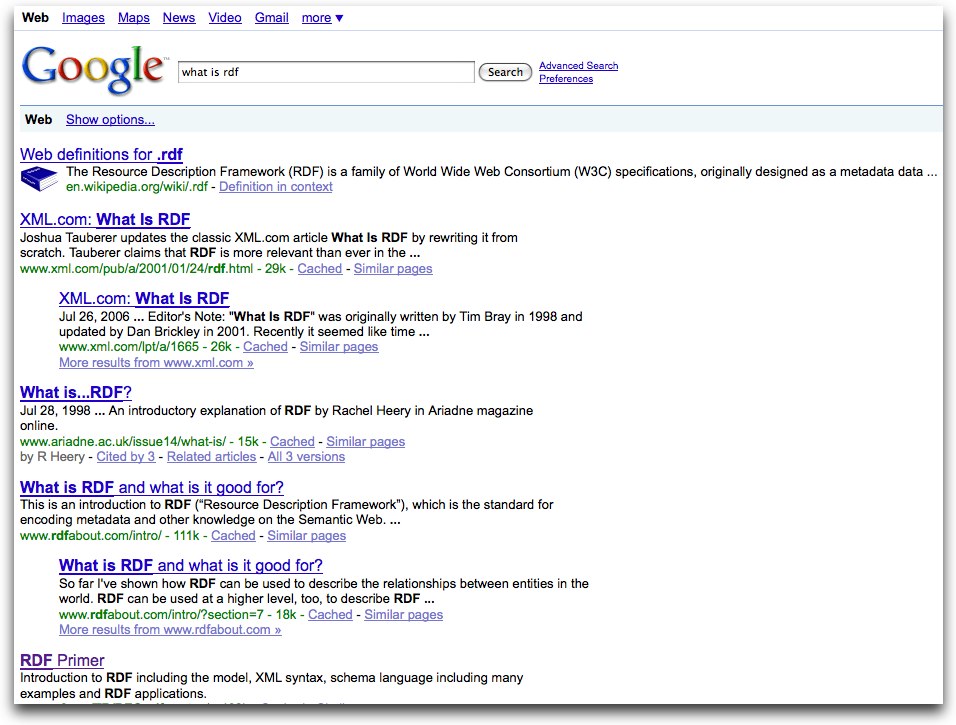 Google is currently having a live presentation on changes the company is making to search. The changes are quite significant, and very impressive.

The one that caught my attention, though, is rich snippets. Google will now read and incorporate two open standards, microformats and RDFa, in its search results.