Dug out from a storm this week and the winds are still blowing, and the lighting still lighting up the sky and none of this has anything to do with the weather. Well, there was a storm earlier, which blew down the tree across from us. Lots of trees down online, too.

I emerged from various uninteresting things and went online this morning and found all these moods today. For instance, there’s an anti-intellectual/postmodern thing going on, links pulled together by AKMA, who attaches his own take on discussion.

I don’t know enough about postmodernism to be hostile about it, one way or another. I used to be insecure about this – now I’m glad. Ignorance really is bliss.

One more person writes “What’s a weblog” and I’m going to loose my cookies.

I found out I can’t use Plesk to manage accounts on the new co-op server because it’s dependent on MySQL 3.23, and we’ll be using MySQL 4.x. That’s okay, though, because we should use open source solutions like Webmin instead. Speaking of open source, from Ken’s posting today, sounds like there’s been a few trees down out in the Apache world.

Tom Shugart doesn’t think much of the heartland, or people with weight problems:

Each time I find myself back in the heartland, it seems to get worse. The food seems to get more and more tasteless and toxic, and the inhabitants more and more rotund. How can the food be so bad—and so bad for you, I wonder, in the middle of one of the richest agricultural areas in the world?

True, the small towns don’t always have the fancy cuisine, though you look about a bit and you might be surprised; and the people are just plain folks – many of them making little money because of unemployment, so they fill their diet with potatoes and pasta and Big Macs – cheap food but starchy and fattening. As Tom noted.

But one thing I’ll say about the midwest, which also include my beautiful new home, Missouri: I’ve never noticed a lack of courtesy in the people – something I found in short supply in California. Generosity, too, as several of us prepare for this weekend’s Race for the Cure, thinking how best to waddle around the 5K course.

I just had an exchange of emails with News is Free about linking directly to my photographs – that whirring sound you hear is my bandwidth being sucked dry.

Me: Don’t scrape my pages.
Them: Your RSS feed is hard to find.
Me: Autodiscovery.
Them: Human beings and handy little orange XML button.
Me: Your personal requirement does not make my courtesy into an imperative. Don’t like little orange button.

So, who is not in a pissy mood? Speak up.

At least nature always comes through: the fireflies made their debut last night. No photos – they’re camera shy. I’d send you all a bouquet of fireflies to cheer you up, but they don’t like the tiny little leashes and keep tearing off the bows. And FedEx said no way. 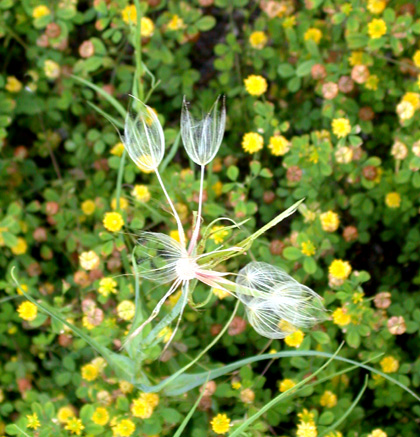