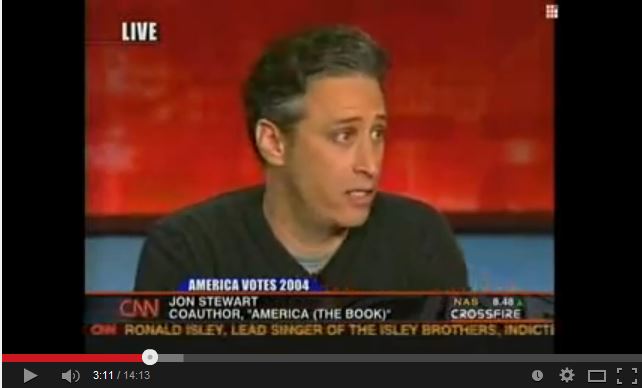 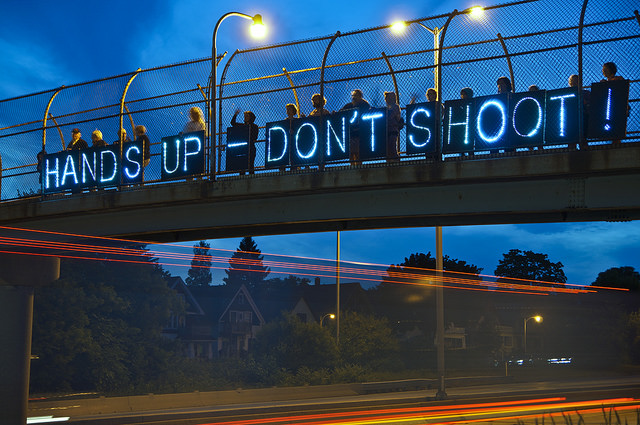 Our Governor Jay Nixon has decided to roll out the troops by declaring a state of emergency before the Ferguson Grand Jury decision. As LOLGOP tweeted:

Nothing says you trust your institutions and constituents like preemptively declaring a state of emergency.

The St. Louis County police have been put in charge of a unified force. This is the same police force that decided armored trucks and men with high powered rifles pointed at peaceful demonstrators was an appropriate action. The same police force that spent over $170,000 stocking up on tear gas and rubber bullets. Oh, I’m sorry, make that sting balls.

Nixon and the rest of the leadership in this area are going to do everything in their power to ensure demonstrators act ‘peacefully’, which translates into ‘sit down, and shut up’. No one wants to hear angry voices. No one in the power structure wants to see anything interfere with the upcoming Christmas spending season. Many of the white people in this area are tired of hearing about Ferguson; tired of being on national TV. They want things to go back to normal.

It doesn’t matter if what’s normal in St. Louis is morally wrong. It doesn’t matter that since Mike Brown was shot, other black men have also been gunned down by St. Louis area police. It doesn’t matter that we’ve heard a lot of words about things improving, all the while actions reflect the opposite—including spending thousands of dollars on tear gas, while doing nothing about the unequal justice system that still saturates the communities surrounding St. Louis. The leaders can’t even keep that idiot in Ferguson from shooting off his mouth, seemingly in a deliberate attempt to further inflame emotions.

In the last few weeks, every time we’ve been told that our Constitutionally protected rights would not be infringed, the statements have been followed up with a “But…”

Sorry, Mr. Nixon, but the protestors aren’t the ones who spent $170,000+ on weapons and incendiary devices. Who exactly is the party threatening violence?

Governor Nixon is telling us we’re all welcome to exercise our freedom of speech, as long as we don’t speak above a whisper. We can assemble, as long as we do so politely. We can express our anger and our hurt, but we should do so tastefully, and minimize our impact on the upcoming Rams game.

Bull. I think we should yell as loud as we can for as long as we can, and meet in the streets and dance a rejection of the status quo. No one pays attention to the group quietly sitting to the side in peaceful protest, and we need that attention. We won’t get meaningful change without that attention. We don’t have to burn the place down, but we should light a fire under Nixon’s butt and tell him to do something more useful than declare a state of emergency and call out the Guard on the people who put said butt in the Governor’s office. 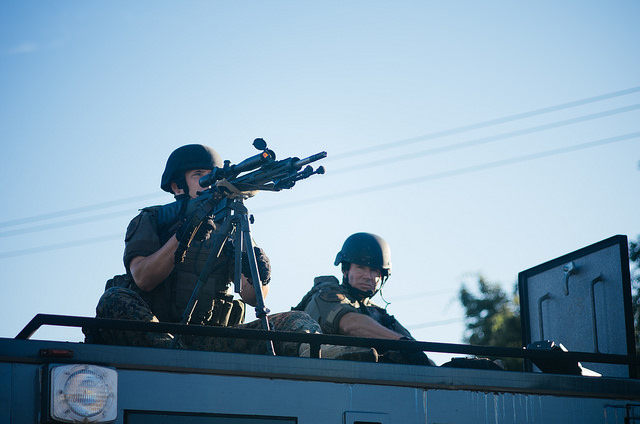 My father was a cop. A Washington state patrolman. I like to think he was a good cop, and have never received any indication otherwise.

When Mike Brown was shot in Ferguson, less than 25 minutes from where I live, I wanted to give the policeman who shot him the benefit of the doubt. Even when I heard that Mike Brown was not armed. Even when I heard they left his body in the street for close to five hours. After all, my Dad was a cop, and if it had been my father who did the shooting, I’d like everyone to give him the benefit of the doubt.

And leaving his body lying there, in the heat, in the street—the exact middle of the street; face down, blood everywhere, with distraught and shocked people all around. We were told on TV that the delay to recover Mike Brown’s body was because the Ferguson police wanted the County police to take over the investigation, and it took time to manage the transfer of authority. But then we were told a large crowd threatened, and the coroner’s van couldn’t get in. And then we were told that shots were fired, the same nebulous shots fired that seemed to happen whenever it is oddly convenient for the police.

Surely, Brown must have been involved in some heinous deed when he was shot. Perhaps kidnapping a child? Beating up on an elderly person? Biting the heads off of kittens?

Confusion turned to anger in the city and I watched the events unfold on TV and read about them in the Post-Dispatch online site. I still held tightly on to that benefit of a doubt, even when the police brought the dogs in to manage the growing crowds. I watched the cops with the dogs and the crowds of black people, and shook with the recognition of old black and white photos of cops and dogs and black people. I wanted to slap the face of the idiot who thought bringing out dogs was a good idea, but then the police brought in the armored trucks and mounted rifles, and I wanted to kiss the idiot because the dogs were actually the good part.

There’s something about seeing a cop in camouflage and bullet proof vest, on top of an armored truck with a rifle pointed at unarmed protesters, that shakes your faith in the police promise to protect and serve.

At the end of the week, my hold on that benefit of the doubt was more a matter of habit than belief, which means when the Ferguson police chief came out with the Mike Brown video just before giving the name of the cop who shot Mike Brown, the doubt vanished instantly, poof! Yeah, just like that.

I watched that man, sweating in the sun, stumble through the words about releasing the video because people asked for it when no one asked for the video. Chief Jackson knew exactly what he was doing by releasing that video, and his actions were not those of a man secure in the belief that his officer was in the right.

At that moment, the exact moment Jackson came out with the video, I knew without a doubt that the shooting was not righteous.

Photo by Jamell Bouie CC BY 2.0