The excitement about Google and Blogger continues, though I wonder if we’re not drifting to the extreme goodness end of the spectrum in our view about what this will mean in the long term.

Noone can ignore the increasing space weblogs take in search results on Google. Weblogs are becoming Google’s primary content source. What if Blogger had built it’s own search engine? With direct access to the data it could have yielded search results on content as soon as the content was posted rather than waiting 1 to 2 days for a Google spider. Why wait for Google when you can get the information you want now from somewhere else? In the first 6 hours of any new story people can’t go to Google for relevant content. Google is too slow.

Tom Matrullo follows this same belief when he writes:

The linking of Google and Pyra fired a teensy synapse felt around the world: The advent of the blog as where events happen and are reported, and travel through the network nervous system that Bill Gates could never quite imagine but once dreamed he could own

A one-stop-shop for voice? Maybe. Weighing search results in favor of the common-voice news and opinion and entertainment offered by us bloggers (as opposed to big media)? I hope so! Google already does this–they’ve been doing it for at least a year. God bless them.

She also writes in my comments in the Cut the Ribbon post:

I will be busy fighting the anti-greed war over in my neck of the woods for the near future. I figure it’s the least I can do to help change the world. With the Google/Prya deal, we have a real opportunity–if they enable us, and I believe that’s the whole point–to flip the power structure globally. Dislodge the greed model and be surprised what else follows. I’m not insane. I think it could work.

Others have also spoken eloquently about the impact Blogger can have on ensuring that the news Google News reports is more timely; Through Blogger, Google will now have direct access to the data in the weblog posts of a couple of hundred thousand webloggers, as soon as they are published. Heady stuff.

Ignoring the fact that this still precludes the majority of webloggers, now is a good time to remember the incident between Google and the Church of Scientology before we become so sanguine about Google buying Blogger and other centralized weblogging tools. Rather than censorship at the server, after material has been posted, there is the potential of censorship at the source. Rather than wait for content to be published and ask for it to be pulled, don’t allow it’s publication in the first place. And if you control the tool, then it doesn’t matter where the content will be published — the source is controlled, not the destination.

I can’t help thinking the Scientologist are already preparing briefs to force Google into searching for so-called copyrighted material about the church in weblog posts before they’re published, and preventing such posts. And before you call me alarmist, look in the news at what’s happening to the country, to the US. Anything’s possible now.

This is, of course, the view at the extreme badness end of the spectrum, and this vulnerability exists for all centralized tools; however, it’s important to be aware that centralization can close doors as much as it can open them.

Reality check time: Perhaps we webloggers also need to remember that though it seems crowded out here on the boards, we are but a speck in the world. We are growing, our numbers are increasing by leaps and bounds, and we are having an impact, but we’re still a speck. Or, for a more visual demonstration:

This is your world 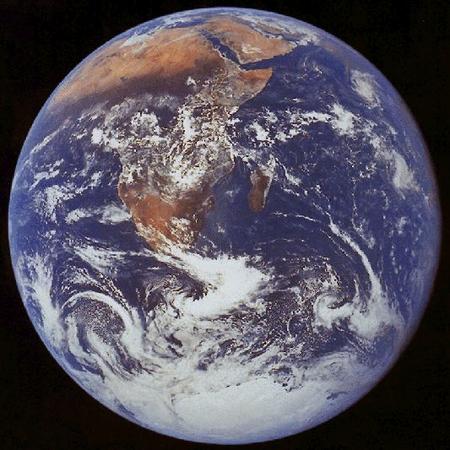 And this is your world, on weblogs