Recovered from the Wayback Machine, orange color and all.

I like my new weblog color. Orange. Burnt orange to be exact. Bitter-sweet.

The color suits because I’ve found weblogging to be both bitter as well as sweet, luckily more of the latter than the former. But you can’t taste the sweet without the bitter, and sometimes a little of the downside creeps in to keep things in balance. Yin and Yang. Bitter and Sweet.

In my comments this morning I found a note from someone who says I lack credibility because in the last week I’ve pulled three postings regarding Dave Winer. The person has a point. We’ve tweaked Dave on this, and here I am doing the same thing.

I don’t particularly care that the person making the comment, “D” as he styles himself, doesn’t return. My readers must, at a minimum have a sense of humor. However, for those lonely few that remain, you are owed an explanation.

I pulled one posting to put into my technology experimental weblog because it had to do purely with technology, and I’m using this Alter Ego weblog for pure technology from this point. You can still see it there. It’s very civil, no burn, no rants and raves. I should have left a forwarding blurb — and the concept of that sounds both interesting and twisted.

I pulled a posting earlier in the week because it made reference to a posting Dave had also pulled, which was the result of an earlier posting I made which Dave took exception to. Did you follow that? You have to be able to follow some twisted threads within weblogging. It’s a requirement.

I pulled this posting for two reasons:

One reason is because it was flamebait and I’ve just not been in a mood to deal with flames this week. Yes, I can burn and bite with the best of them; but not all the time, and not this week.

The second reason was irony. I soundlessly pull a posting whose content was about Dave soundlessly pulling a posting. Try putting that on your scales and see if you don’t get jello. Call it weblogging’s first performance art and title it “Silence of the Postings”.

Finally, I pulled yesterday’s posting about the whole ugly Winerlog/Dave Winer thing. I was concerned that Winerlog was killed summarily, only to find out it was a web server performance thing. (And folks, if you haven’t noticed by now, all the editthispage.com web sites have lousy preformance — the server is maxed out.)

But I am wasting blogspace today because D was right, I am lacking credibility for pulling the postings without note or notice, at least for two of them. And though we kiss the elusive D good-bye, I do care that those of you that remain are given an explanation. Whether you want it or not.

One last related note — Dave, no matter how ugly Winerlog gets, at least give him one week on your server to allow him to re-direct to his new weblog. And Winerlog, can’t you shut up one moment, long enough to get moved?

(Rogi, I hope you don’t mind me showing your comments out of context; I have the old comments, but not the old posting.)

I like the concept of peers being able to link and serve as each other’s cloud. To me this is true distributed computing. However, a “peer” that’s guaranteed to be up 24 hours a day isn’t a true peer — it becomes a server.

For a P2P cloud, you’re going to have to a mechanism that can distribute services among a group of peers so that a request on the service can match to whatever is the closest peer that’s accessible. If you push the services out to one statically defined machine, you have client/server — even if you want to call the server a “full peer”. 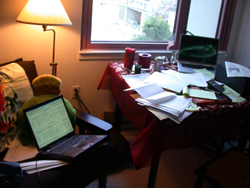 I finally found the kernel of the writer’s block I’ve had, as well as much of my restlessness in the last month — it was the end of year tax filings.

Really, you would have laughed if you had seen me. I literally couldn’t approach the table with all my records and paperwork and forms. Once I finally forced myself into the chair, the slightest thing would distract me.

I must finish this form — oh, look there’s the guardsman. Wave at the nice man with the big gun.

Stop it! I must finish this fo — oh, look at the pretty ship. I wonder where it’s from?

I MUST FINISH THI – Is that a ripple in the bay there? I bet it is.

I even grabbed the camera and started taking pictures of the paperwork at one point. Please agree with me that this is not normal behavior. 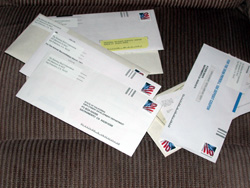 In previous years my ex-husband did all the filings and paperwork. In the last year I’ve ignored the fact that I had a company to run, and this neglect hit me square in the face yesterday and today. I knew my paperwork was a mess. I knew I had missed critical filings. Yup and yup.

But I’m done. Facing some fines, but I’m done. And in the process, I found that I’ve been ignoring other aspects of my life in addition to the necessary work to keep my company going. Who would have thought that tax work would force a person to look at how they’re living their life — in effect, kicking one in the butt when one needs it.

I consider myself kicked.