I hadn’t noticed before, but I sometimes favor a zig-zag pattern to my photographs, shooting across the plane of the picture and using natural formations and shadows to complete the effect. I wonder if this is a normal tendency on the part of all photographers?

I do know that it tends to draw the eye into the picture, at least from my perspective. But then, I took the picture. From another’s perspective, it might be an annoying tendency of mine, one in which they hope I’ll soon outgrow as I learn to take photos with the grain of the shot rather than across it. Somewhat like petting a cat with the fur rather than against the fur. 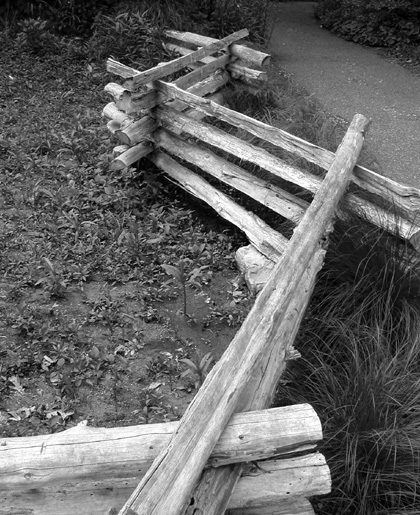 I saw this fence and thought to myself, “Of course I have to take this picture”, but people kept coming up the path next to the fence. I didn’t want them to think I was trying to take the picture, and force them to cut short their enjoyment of the flowers along the way, so I’d look anywhere but at the fence.

I must have looked like an idiot, standing next to the fence, swiviling my head around and not looking at anything. 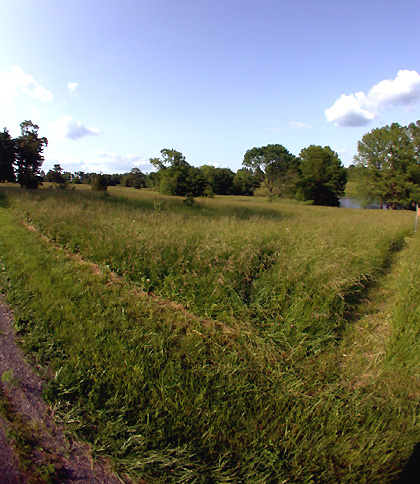 I took this with my fisheye lens because I wanted to accentuate the “V” formation in the field. The problem with the fisheye though is that my shadow kept ending up in the shot. I had to hold the camera just so and far away from my body. Again, I must have looked an idiot. I like the shot, but I’m not happy with the lighting. 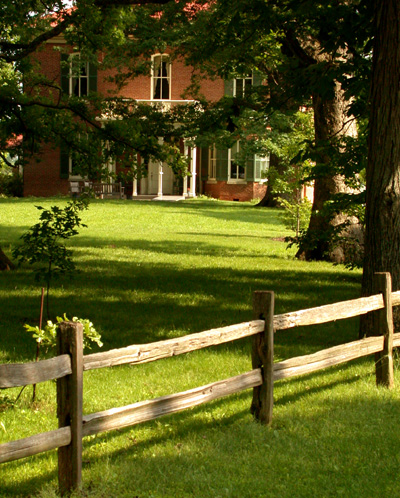 This is a case where the shadows of the tree formed the ‘zag’ part of the zig-zag, breaking up the ground between the house and the fence. It’s an okay shot, but nothing to write home about.

Of course, this is a weblog — one can always write in a weblog. 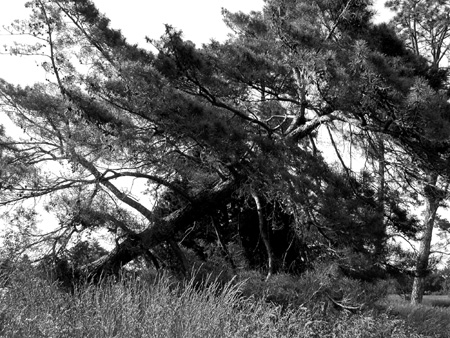 This tree was literally growing sideways. I’m not sure I captured it at the right angle — forgive the pun! — but I’ll be back, and will try other shots. It might be better as a color shot, but the sky was too white and too bland. Next time I’ll try with bright blue sky, see what happens.

In these three photographs, there were a couple of patterns that emerged — the reflections of the water and the vertical nature of the plants surrounding the water. Both aspects added to the shots and these were some of my favorite photos from the day. 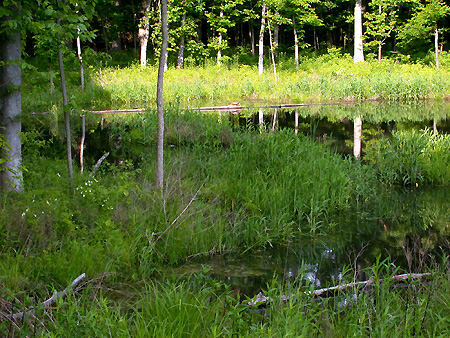 I really liked this photo. I liked the vertical trees on both sides of the pond, which seem to blend one into each other. I like the lighting — very dark in the forest, very bright on the pond, creating a sense of mystery.

If I don’t like anything about the picture, it’s the darkness of the foreground. 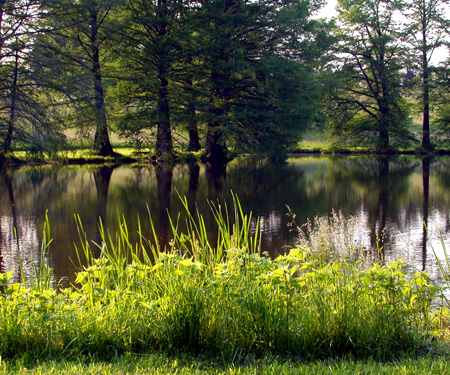 I liked the foreground/background effect of the weeds in the front and the trees on the other side of the lake. This just accentuated the reflection of the trees in the water, which is something I’ll never tire of.

You’ll probably tire of it though. If I do too many reflection pictures, please feel free to make a note of it. I’ll ignore the note, but you’ll feel better having made it. 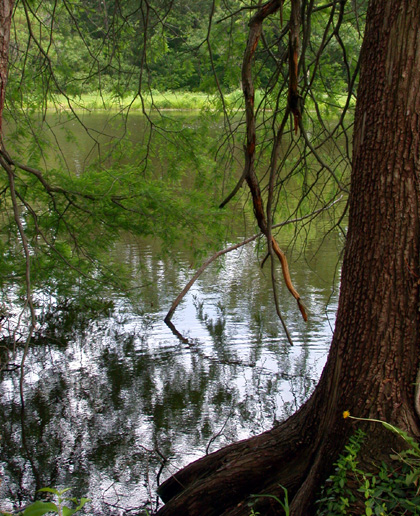 Not the best of photos, as the overhanding branches make the picture ‘messy’ in my opinion. but I liked the base of the tree being wrapped in water. I would have taken more photos, but I was disturbing a nesting goose.

I walked down by the lake to take some reflection shots and almost stepped on a nest with three large eggs in it. Just as I was about to take a photo of the eggs, I heard a sound in the water next to the tree, the mother and father goose.

I backed away to the table nearby and stopped. The mother and father hissed at me a bit but evidently decided I wasn’t a threat because they didn’t chase me — something geese will do.

Then, the two lived up to gender stereotypes the world over: the mother settled down with the kiddies, preening her feathers, while the father took off across the lake. 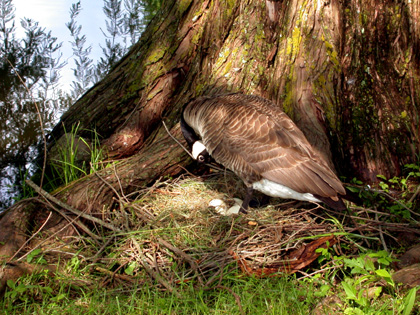 I had a difficult time getting a shot of mom as she kept snaking her head around to work on her feathers. I also wanted a shot of the eggs, and this ended up being the best of both. 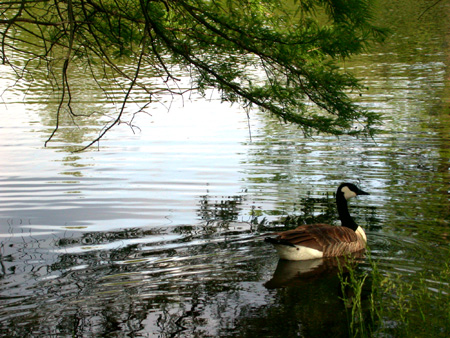 The shot is a bit dark, but I like it Of course I like it — lots of reflective water, one of my obsessions.