I was very psyched about the hikes today so you can imagine that I was a bit disappointed to get to the park and find all the trails closed. More than closed – one of the trails I’d planned on taking today was totally gone. The good weather today lured me into forgetting that riverside hikes should be traversed in the dead of winter, when the cold freezes the ground and stabilizes it. One should definitely avoid riverside hikes after record levels of rain.

However, the trip wasn’t a waste. The drive was nice and I kicked around the trail heads a bit. On the way back I finally stopped by a covered bridge I’d seen a sign for before. It was a pretty solid piece of wood, and I wasn’t that impressed with it – until I read the plaque that it had been built in 1872.

I’d do a color photo, but the bridge looks too much like a highway department’s maintenance shed. I’m sorry, I know I lack romance, but I’m not one for covered bridges. It’s a bridge, it’s a building, and I’m incapable of conjuring up the sounds of horse hooves ringing on hard wood, or to visualize lasses in white crinoline on their way to market day. I looked for a poem that would invoke a deeper appreciation of covered bridges, but all the ones I found were as insipid as that foolish book and movie, The Bridges of Madison County.

Leave it to B & W that if it can’t improve the shot, will at least bring out the age of the subject. 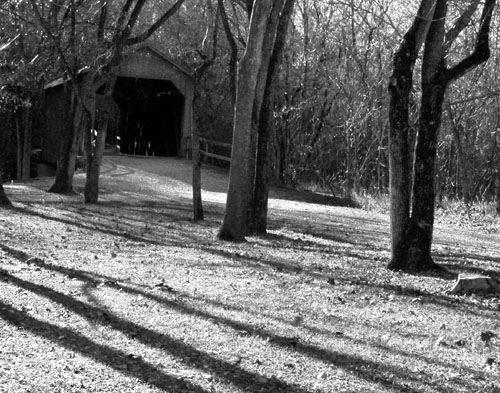 As I drove back, I could see that the rivers were high, higher than I’d seen before. On a hunch I stopped by my favorite Meramec River location to find that the water was actually up to the top of the cliff I normally climb down. It was running fast, too, with much larger debris than normal, including several trees.

Today the temperature rose to 75F, sunny with a warm wind. We’ll have snow on Monday. Welcome to St. Louis. 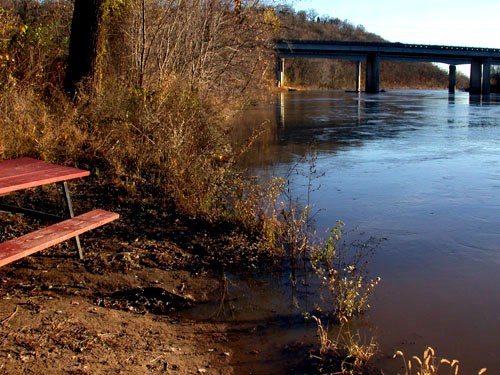 I’m off to walk two trails today that have been long-time nemesis. But today, today, the relationship between us will fall, or rise might be a better word, from animosity to amicability.

We shall part by day’s end, these trails and I, as friends.

Before I go, I did want to point out two stories from friends that are worth reading, following links and more reading, thinking, and then re-reading.

Netwoman did an interview of Jeneane Sessum, focusing primarily on women, writing, and community. The whole interview is quintessential Jeneane, every last bit of community, self, and soul.

When asked about the perceived focus on male webloggers, Jeneane wrote:

Again, to me it’s about what you come to blogging (reading or writing) for. If it’s to replicate the offline world, you’ll seek out the blogland versions of Hanity and Combs and Rush Limbaugh and Bill O’Riley who garner the same interest and same attention as those types do in mainstream media. If you’re coming here to connect with others who are interested in what you’re interested in, who have kids that don’t sleep at night like yours, who are exploring what love is, what loss is, what joy is, what grieving is, and maybe all of that at the same time, then you’re NOT replicating big media broadcast bullshit, and you won’t be spending a lot of time on Instapundit and Glenn Reynolds’ blogs. Because you won’t get those things there.

Women do write on politics as much or perhaps even more than men, but I do think we do so somewhat differently than the head cheese at the top of the lists. As Jeneane says, we tend to write more rather than link; focusing on political events’ effects us, personally, as compared to the world globally. We don’t link just to link, throwing in a few quippy, biting words, just shy of slander.

I’m finding this same quality in all the webloggers I read – men and women. They’re all thoughtful people, and thinking writers.

Which leads me to my second “link” today, to Jonathon Delacour’s Preaching to the Converted, which skillfully weaves together topics as diverse as introversion to Bush and his comparison to Hitler. He quotes Jeff Ward, who wrote:

Within a few months Benjamin was dead. I cried when I read the letter, so full of ideas that were never completed. I thought about these fragments, and hoped that I might someday connect them. I get up each day and work, and hope that the Bush nazis will be deposed and my work will continue without interruption. There is a problem with projecting yourself onto tragic figures. It makes you no fun at parties at all.

For those who doubt the similarities between the Bush administration and the totalitarian forces that came to power during the Thirties in Germany, Italy, Russia, and Japan, I can only say “Come back after you’ve read Piers Brendon’s The Dark Valley: A Panorama of the 30s from cover to cover. Then we can talk some more.” A few weeks ago I sent a copy to a friend. This morning he emailed me, saying: “I’m on the penultimate chapter, ‘Nippon in China’  and I keep noticing echoes all around me.”

(Actually, after Jonathon’s original mention of the book I ordered The Dark Valley through my library and just picked it up a couple of days ago – one of the many advantages of one’s local library system having an online catalog system. )

But Bush has neither advocated nor enabled the slaughter of 30 million people, nor arranged for the systematic murder of 6 million of them because of their religion or ethnic origin.

There are lousy politicians, there are bad leaders, there are tyrants, and there are psychopathic monsters. These distinctions are meaningful.

The comparison to Hitler is irresponsible, in my view.

I understand where Pascale is coming from, and there is danger in applying a label such as ‘nazi’ to Bush in this country. Rather than push people away from him, it might push people towards him because they do not equate Bush and Hitler, and the comparison could make them deaf to those actions they can see and deplore. Such is the danger of rhetoric. However, I can also see where Jeff and Jonathon arrived at their comparison because of my own studies of pre-war history. When it comes to masterful manipulation of propaganda, few were as talented as Hitler, until we see the breathless efforts of the current Bush administration.

Jonathon had held back from discussing these issues because, as he wrote:

I’ve been working for a long time on a couple of related entries: about George W. Bush’s aircraft carrier stunt and the Private Jessica Lynch debacle. Obviously I’m convinced that I have something interesting to say about these subjects-despite the fact that both topics have been covered exhaustively by mainstream journalists and webloggers alike. What has held me back is a strong aversion to preaching to the converted…

But I don’t think that in this year to come, this dangerous year to come, that we will be speaking to the converted, and all words written passionately, feeling, and eloquently, will spark new recognition and thought.

There are no simple issues today. Blind following of rhetoric will cause more harm then good, no matter how nobel the impetus. We look at the war in Iraq and we compare it to Vietnam because rhetorically we hope to generate the same response, but this would be disastrous, as Joe Duemer wrote about recently, and which I discussed, briefly. We read the story of the Massachusetts’s decision regarding gay marriage, and the liberal among us see only the good, while the cautious see the potential dangers of this becoming the issue in the upcoming election (regardless of our own personal delight at this news).

There truly are no globally converted on any one subject among the ranks of thinking people, which is why I was so glad to read Jonathon’s essay, and Jeneane’s interview, and Jeff’s and Joe’s writings, and Pascale’s comment.

Now is not the time to be quiet and to think to oneself that “people have heard this before”, because within each of us are the words, and the passion, and the brilliance and humor and elegance, capable of touching that one person no one else could touch – and this can make all the difference in these troubled times.

I was so moved by all this writing that I was sorely tempted to stay home and write and write and write, but the sun is shining and the weather fine, and I have a trail to touch today, which hopefully will only touch gently back.

Japanese whale researchers recently discovered a new species of baleen whale, which they have named Balaenoptera omurai. It’s not unusual to discover new species of animals, but not ones this large – about 12 meters long. Big as a bus, in other words.

Rumor has it that George Bush heralded the news of this large discovery with relief. Sources close to the President reported him as saying, “See? It took scientists two hundred years to find this whale, and its as big as a bus. A bus! And if the Japanese hadn’t been allowed to kill all those whales, we’d never have known this species exists.”

“Now you know why we haven’t found any WMD. We need to kill more Iraqi.”