Yesterday was an absolutely beautiful day, almost 70 degrees. There was a breeze, but it was warm and gentle and one could go about with a light jacket and feel just right.

I hadn’t been up to Shaw in a long time because of the road construction on I-44. The state is adding an extra lane all the way to Gray Summit, and in the process the lanes are narrow and the road surface uneven. The speed limit is supposed to be 50, but I’ve yet to see anyone follow this. Well, other than myself. A Ford Focus handles beautifully on country roads, gravel, in the city and what not, but it does not do well on uneven roads.

At Shaw I debated on taking the forest path to the wet land, or the country road behind the back. I had my iPod in its new heavy duty Belkin leather case, and it was fun just walking along the road, listening to Bond; taking the ear buds out from time to time to listen to the wind through the trees and the birds singing.

I also took along my camera because, though Shaw is in the middle of its dormant stage, you never know when something will pop up that might be fun to photograph. Such was the case yesterday when I came across piles of cut Eastern redcedar. 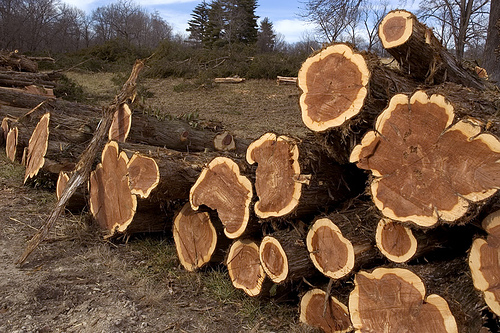 Eastern redcedar is really a juniper tree, but it still has a beautiful grain and smell. The photography gave me an excuse to get close to the wood and breath in the scent. I noticed that the trees must have been fresh cut, as they were still ‘bleeding’ from the cuts. 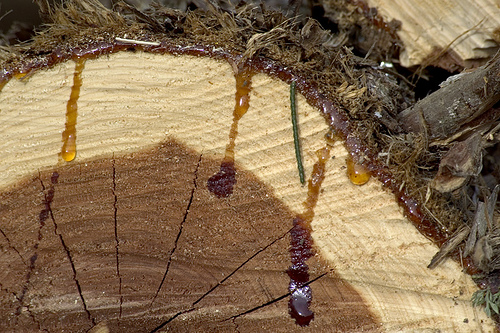 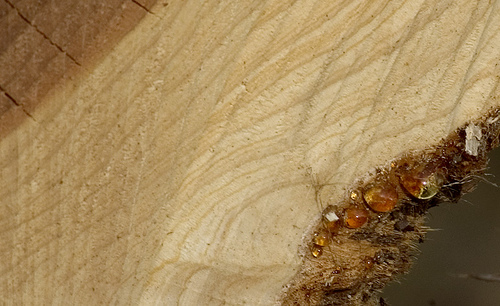 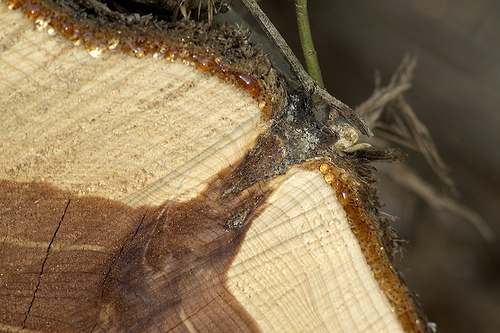 A couple of folks came along and seemed dismayed to see what looked like healthy young trees cut down. After all, this is a Nature Center, what could be more natural than trees? Especially when the Center replaces the stands of trees with what looked like fields of weed. However, this effort is part of the the ongoing effort to remove invasive species all across the park; restoring native wetland and prairie, as well as stands of hickory and oak, which are more natural for this area.

Environments are delicate, and the health of a particular environment is not necessarily obvious in the eye of the beholder. Though a vast empty prairie may look like ruin, and a forest of cedar look richly healthy, the opposite can be and often is in true–prairies are alive with many species of plants and animals that may be difficult to spot, while eastern redcedar forests may contain just that: big redcedar trees and nothing else.

At one time, Shaw was prairie and wetland, but people came along and plowed it under into farmland. When the farms were abandoned and the ground lay fallow, rather than be reclaimed by what was natural wildflowers and grasses, seeds contained in berries eaten by birds made their way to the fertile ground and honeysuckle and eastern redcedar thrived. Unfortunately, redcedar needles contain a high level of acidity, unpalatable to other plants. Both species choke out others by overrunning the ground as well as providing a canopy preventing young plants from getting enough sun. 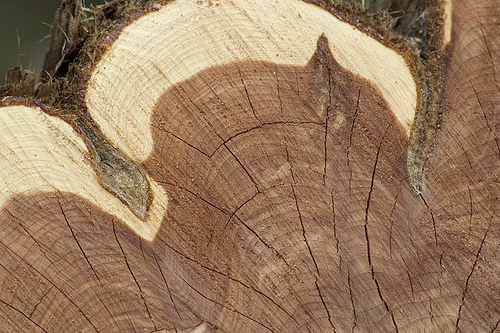 Like many other areas in the Midwest, work is underway to pull up these invasive plants, and replant native species in their place. Until this is finished, every winter the park is a mass of pulled and destroyed honeysuckle vine and redcedar trees in addition to the marks of controlled burns.

I left the road half way around to take the forest path past the prairie. The park had added a new bench overlooking the hills in a nice place to sit and enjoy the view of the grassland and the sod house on the hill. 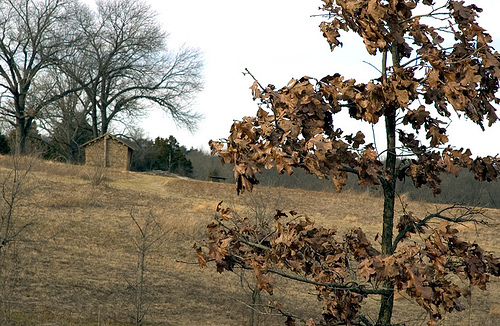 I liked the inscription on the bench: He was in love with this world. 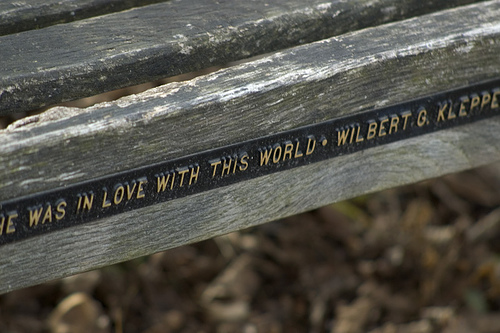 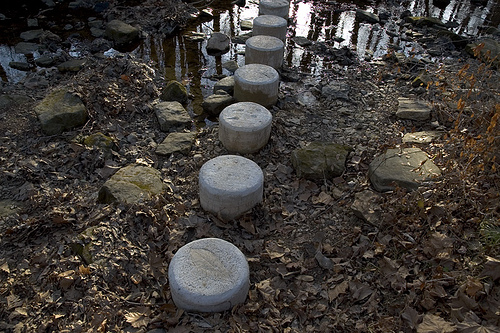 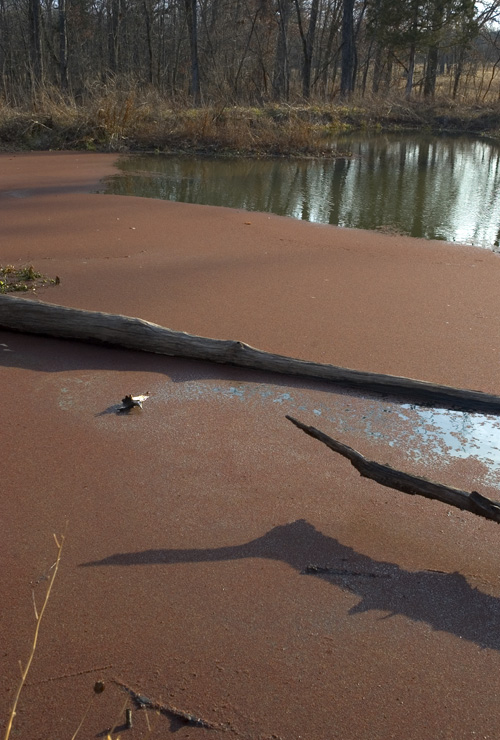 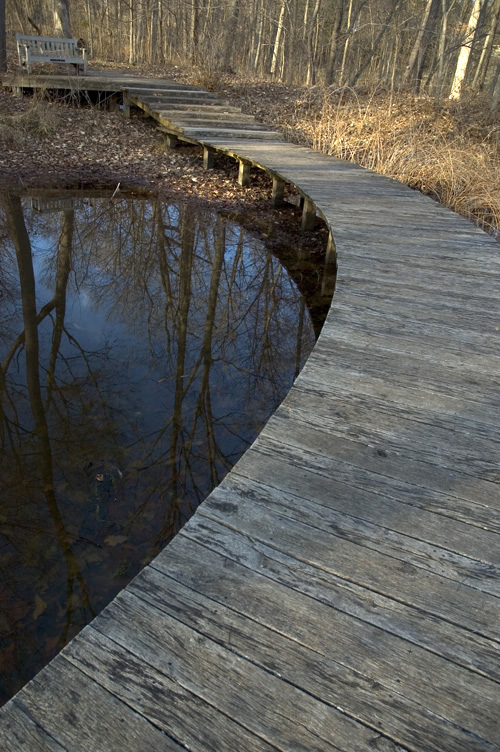 The robins were by yesterday, in their annual migration. I grabbed a few photos, which I’ll scatter about this writing.

We were hit, or I should say, sideswiped by a tornado Sunday night. It wasn’t a surprise: we had tornado watches all night, and you could see the storm coming toward us on the radar. Still, we’ve had warnings before and not much has happened, so I went to bed about ten on Sunday after taking two nighttime Tylenol to help me sleep. 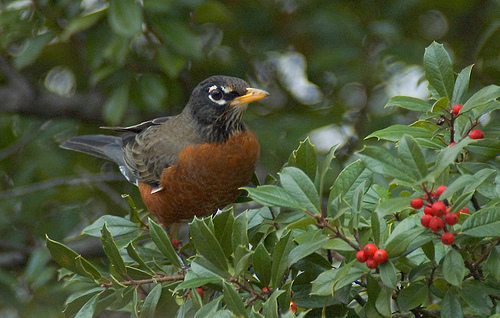 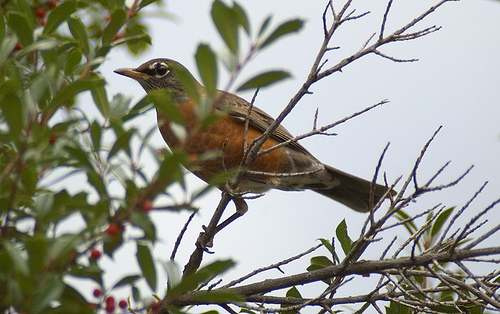 I lay in bed, half asleep listening to the wind and rain, when I noticed that the sound was getting louder and more steady. People have said that tornadoes sound like trains, but I didn’t get that impression. The sound was unlike anything I’ve ever heard, and as it got closer, I grew more alarmed until I jumped out of bed and opened the curtain. Outside was rain and hail and wind whipping all about in a chaotic fashion. When one of the lamp posts fell over, I grabbed my robe and called out to my roommate that we were getting hit by a tornado. 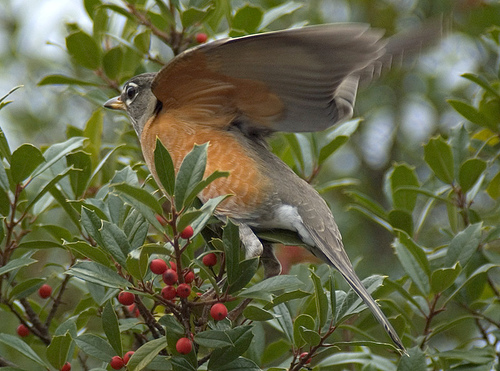 He was still up, watching weather on television and assured me that this wasn’t a tornado — they had turned off the tornado warning just a few minutes before. It was just a strong wind is all. I stood in the hall, robe clutched around me and listened, and as suddenly as the wind had started, it was gone. He went back to bed; I went back to bed. 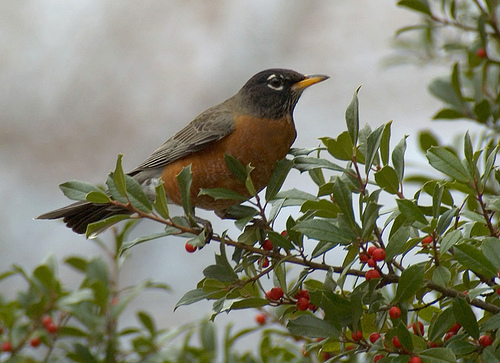 Strong wind my butt. The next morning I took my roomie into work, and we passed the Wal-Mart near our home and saw large signs tossed about, one half driven into a dirt bank; steel fences twisted into pretzels; electric poles snapped like toothpicks. It was an F0 tornado, with winds of 70 miles per hour. It had skipped about, snapping large trees into pieces and damaging several houses, as well as creating the damage to the shopping area. It was just a baby twister, and luckily no one was hurt.

The unseasonable warm weather is gone now–swept away by this last storm of too long a year of storms–and it’s very cold. I don’t mind so much when I get a visit from my robins. 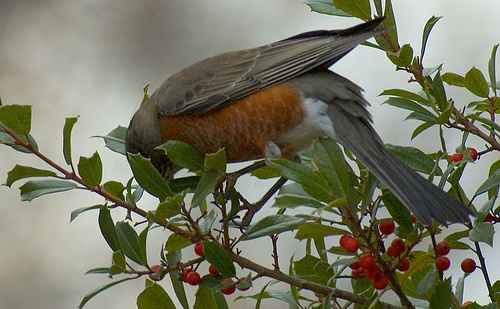 My mother is anxious for me to see all of the beautiful places she’s discovered. By the time I return home, I’ll be ready for a good long rest, tweaking the A-listers and writing code.

Today I headed the opposite direction and drove just out to Clark Folk about 29 miles away. Unfortunately, the day was so beautiful that I ended up following dirt roads hither and yon. What’s the good of having a rental car if one doesn’t make full use of it? 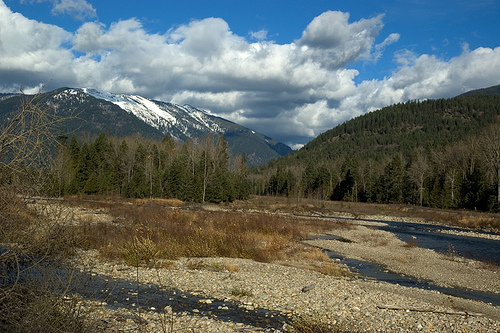 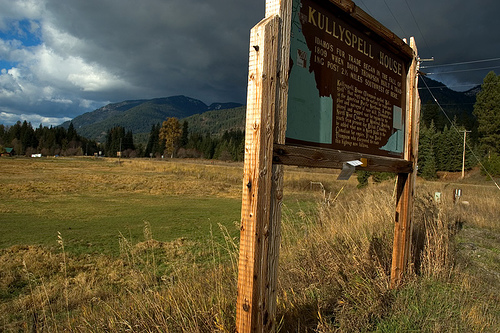 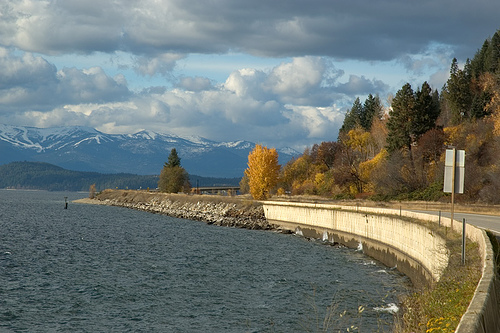 In the town of Clark Fork, I passed a little gift shop and didn’t pay it much attention until I noticed that the sign that said they sold marbles. Marbles? I pulled in and spent a wonderful hour looking through the shop at all the odds and ends, including marbles and antique bikes, and talking with the owner. I took photos of her store, and she gave me several sample marbles, imprinted with logos with cute little wood stands. I asked about the hand crafted marbles, and she picked out one of her favorite marbles and brought it and me out into the sun so I could see it. It was called “Fire and Ice”. 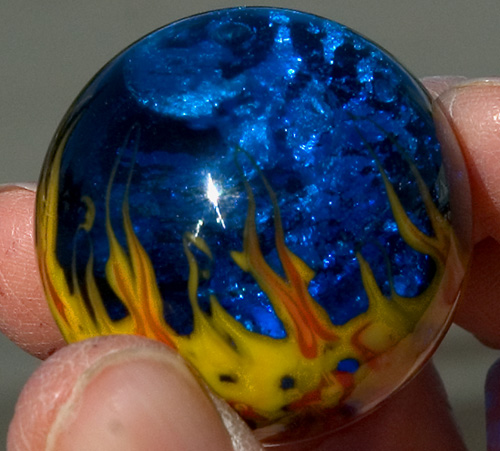 Did I buy it, of course I bought it. Fire and Ice, how could I not buy it. My excuse is that it’s my birthday next week, but I needed the color; I would have bought it even if I didn’t have a handy excuse. And no, my plane ticket is purchased, so I won’t be forced to hitchhike home.