The latest round of discussions related to longdesc (yes, still) was triggered by a revert request from Laura Carlson:

The change redefined the meaning for the hidden attribute, from:

It would similarly be incorrect to use the ARIA aria-describedby attribute to refer to descriptions that are themselves hidden. Hiding a section means that it is not applicable or relevant to anyone at the current time, so clearly it cannot be a valid description of content the user can interact with.

Elements and scripts may, however, refer to elements that are hidden in other contexts.
…
It would be fine, however, to use the ARIA aria-describedby attribute to refer to descriptions that are themselves hidden. While hiding the descriptions implies that they are not useful alone, they could be written in such a way that they are useful in the specific context of being referenced from the images that they describe.

Similarly, a canvas element with the hidden attribute could be used by a scripted graphics engine as an off-screen buffer, and a form control could refer to a hidden form element using its form attribute.

This triggered two separate discussions—one related to making an edit to HTML5 specifically in favor of a change proposal currently under rather contentious debate; the second related to redefining hidden in such a way that aria-describedby would be allowed to point to it.

The revert request was successful, which now leaves the discussion about allowing aria-describedby to point to content marked with the hidden attribute, and this change’s impact, or not, on the decision to deprecate longdesc. I’m not going to get into the longdesc deprecate debate—my views on this are widely known and I’ve long been in support of keeping this attribute in the HTML spec. Instead, I want to focus on the change to hidden.

A recent post to the HTML-WG mentioned separating the aria-describedby/hidden issue into a separate survey (and there’s now an issue for it). However, I wanted to remind the HTML-WG co-chairs that they already decided this issue back in 2010.

In 2010 I made a request to remove the hidden attribute from HTML5. In the change proposal to support the request, I wrote:

Is the content truly irrelevant, though? Consider the definition for the attribute:

Elements in a section hidden by the hidden attribute are still active, e.g. scripts and form controls in such sections still execute and submit respectively. Only their presentation to the user changes.

“An irrelevant element is not one that is active, receiving events, participating in the web page, or form submission. The only truly irrelevant page component is one that doesn’t exist. If people want a truly irrelevant page section, they should use the DOM to create and remove the element, as needed. There is nothing about the behavior associated with removing an element from user agent rendering that is made more meaningful using a single-purposed HTML attribute, rather than using a simple combination of CSS property and ARIA attribute. Both have to do with the presentation of the element.”

Presentation with the hidden attribute isn’t an incidental purpose, it is the primary purpose of the attribute. Rather than separate presentation and structure, it firmly welds the two.

My request to remove hidden wasn’t successful, based on the strength of arguments in favor. What were these arguments? The following is the primary one, from the counter-proposal:

Authors of web documents and applications often need to temporarily hide certain content from readers and users. Via a combination of script and CSS, such functionality is possible to build today, and there are hundreds of such implementations extant on the web. It’s clear that hidden=”” Solves Real Problems. Attempting to implement such functionality with JavaScript and CSS is fundamentally more difficult and error-prone than hidden=””. hidden=”” is literally the simplest thing that could possibly work, and thus we Avoid Needless Complexity in its design. By making it as easy as possible to author, and by defining uniform UA behavior (unlike bolt-on scripts which emulate this functionality), we preserve our Priority of Constituencies. Bolt-on emulations of hidden=”” can fail to correctly hide content in a media-independent way, resulting in a degraded experience for users of aural browsers and other AT tools. hidden=”” thus promotes Accessibility more than bolt-on alternatives.

The existing mechanisms all miss one case or another, and it is complicated to understand when to use one over another. The new hidden attribute covers all the cases in a way that will make it much simpler to include markup on a page that is intended as input to a script rather than output to a user.

a native solution which provides the means of marking content as not yet or no longer relevant, is highly desireable; while such a feature, of course, needs to be harmonized with what ARIA offers, it MUST be remembered that aria-hidden is part of a bridging vocabulary, which provides semantics and functionalities which native markup does not provide; the hiding and exposition of content that is not yet, or is no longer, relevant should not be left to scripting or an overlay such as ARIA, but should be an organic part of HTML5.

I object to removing the hidden attribute as it would result in missing out of the positive effects listed in http://www.w3.org/html/wg/wiki/ChangeProposals/KeepNewElements#Positive_…

My experience working with web authors for several years is that they tend to do what is easy, whereas accessibility often ends up coming second due to time constraints and unawareness.

By including the semantic hidden element, we both make it easier for developers to do what they want, since they can use the .hidden IDL attribute, and they automatically get the desired semantic meaning.

I think it’s very unlikely that as many people would add proper ARIA attributes, as would use the hidden attribute. I think this is the reason that the WAI-ARIA specification encourages developers of markup languages to add semantic elements and explicitly declares ARIA as a bridge technology. I also think this is why the HTML Accessibility TF has endorsed the hidden attribute.

The co-chairs agreed with those who argued in favor of keeping hidden, writing:

It seems that the hidden attribute serves a valid, broad use case. It has interest from implementors and authors.

A number of arguments were made in favor of retaining the hidden attribute. It was argued with partial success that hidden captures useful semantics. Many cited the accessibility benefits of built-in elements and attributes, including hidden. A number of other concrete benefits were cited, such as likelihood of surviving syndication. These positive arguments were in general stronger than the counter-arguments, and provided strong reasons to keep hidden.

There were also arguments made against the hidden attribute. It was argued that CSS+ARIA-based implementations of hidden-like functionality are sufficient, so no attribute is needed. Deployment costs were also cited as a concern. And the semantic nature of the attribute was cast in doubt. In general, these arguments did not overcome the counter-arguments, and are not strong reasons to remove hidden.

The maturity argument against hidden had more weight. The Working Group has in the past chosen to remove features from the draft for reasons of maturity. However, this factor was not decisive in itself, at least at this time, since the W3C Process allows further opportunities for review, implementation and feedback.

In my opinion, the decision was not necessarily a model of clarity. However, I do believe that this 2010 decision answers the question whether aria-describedby can point to an element marked with the hidden attribute, and the answer is, No.

An attribute used to designate content that is available for scripting purposes is not the same as an attribute that is used to remove the content from visual display. Why? because one implies the same result regardless of type of browser accessing the page, while the other implies something completely the opposite.

My understanding of the decision in 2010 is that “hidden” meant that the material was irrelevant regardless of type of browser accessing the page. This is supported by the fact that at one point in time, the hidden attribute was named irrelevant. The reason the name of the attribute was changed was more one of expediency than change of semantics. The visibility of the content should make no difference on whether it is relevant or not.

As the HTML5 editor, Ian Hickson, wrote when he renamed irrelevant to hidden:

Based on this decision two years ago, I’m at a loss to understand why the HTML5 co-chairs would consider an option to allow aria-describedby to link to this content so that it can be rendered by screen readers—in effect, to make the content in the element with the hidden attribute, relevant. Something cannot be both relevant and irrelevant at the exact same time.

Just a quick update, to finish out earlier stories on Debe Bell and the Six Bells Rabbitry.

Debe Bell was found guilty of 35 counts of animal abuse.

Surprisingly, some of the rabbits were hearty enough to survive, and once they were nursed back to health, they were readied for adoption through the Foothills Animal Shelter. However, (clarification) the Jeffco DA’s office says twenty of them were dead, including a number of animals found in a farm freezer.

Although necropsies on the dead animals suggested that they had experienced pain and suffering before expiring, the jury considering the case ruled Bell not guilty in their death. But that still left 35 counts of animal cruelty on which she was convicted, with each one bringing a potential eighteen months in jail.

Bell had said only a few rabbits were dead. Truth will out.

I wonder what those who have been defending her will say about these facts? 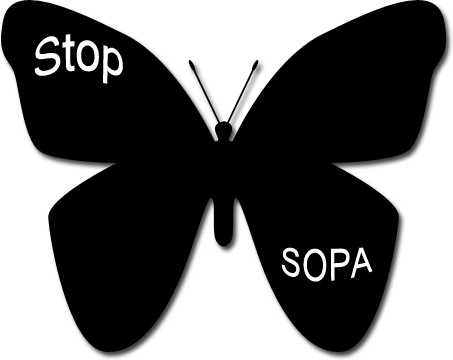 O’Reilly Media’s Stop SOPA page, describing what this is all about.